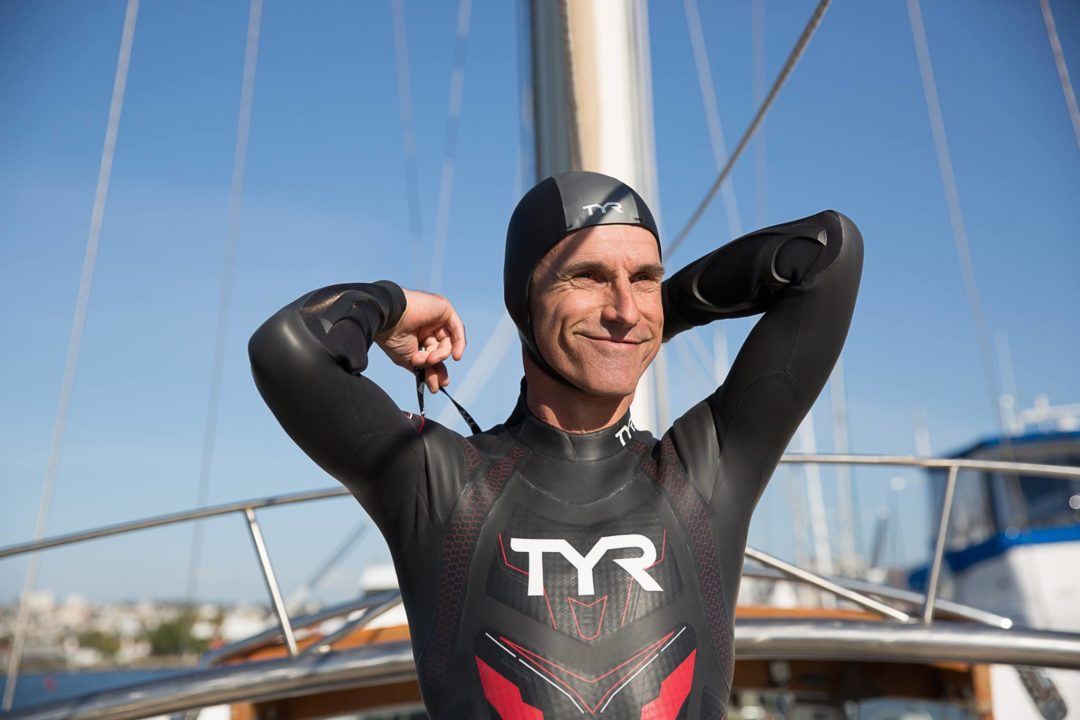 Fifty-year-old  Frenchman Ben Lecomte will embark Sunday on a swim from the coast of Chosi, Japan, and intends to stay in the water for six months.

Update: Lecomte is waiting for a piece of equipment to arrive in Japan and will now depart between June 2nd and 4th.

By the end of those six months, Lecomte plans to have swum to San Francisco; he would be the first to swim the Pacific Ocean.

Lecomte, who has been preparing for the upcoming swim for four years, in 1998 claims to have become the first person to swim the Atlantic Ocean without a kickboard. In that attempt he covered 3,700 miles in 73 days – it’s unclear how that happened, however, because that works out to roughly 6.5-minute miles. That would be an impressive distance to run in 73 days, let alone swim, leading to many questions about the veracity of the claim.

As he did in the Atlantic swim, Lecomte will spend his nights on a sailboat. That swim was not verified by Guinness World Records because the sailboat drifted each night, so he did not necessarily begin in the morning where he left off.

This time, he is scheduled to swim for eight hours and says he will ideally cover 30 miles each day – that’s averaging 16-minute miles for about 5,500 miles. He will be accompanied by an eight-person crew and has financial backers including Discovery lined up. Seeker.com, will also feature video updates throughout the swim on its “The Swim” homepage.

Additionally, 13 institutions (including NASA) will conduct scientific research on various aspects of the swim, including water quality, trash presence, and the effects of the swim on Lecomte’s body. He will wear an extensive amount of equipment to track his state for both safety and scientific reasons.

To train for the massive undertaking, Lecomte swims six hours a day in open water.

“But an adventure like this is really mind over matter,” he told the Washington Post. “I’m not trying to swim faster than anybody else. I’m just trying to log my time and my hours per day. What is important is knowing what you’re going to do with your mind.”

Click here track his swim and find out more information.

The world-wide dearth of scientific data on finger “pruny-ness” will finally be corrected.