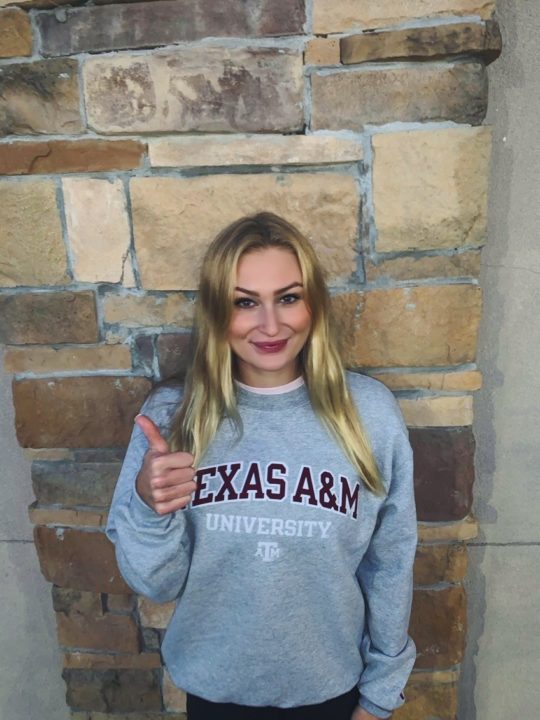 After a season-and-a-half at the University of Arizona, Monica Gumina will transfer to Texas A&M University for the 2019-2020 season. The move will bring her back closer to home: she attended high school in The Woodlands, Texas: a northern-Houston suburb that is just over an hour from College Station, where Texas A&M is located.

Gumina’s transfer announcement comes after having the best meet of her college career in December at the Minnesota Invitational. There, she had arguably the best meet of her collegiate career: she went a best time in the 200 free (dropping 9-tenths of a second) and the 500 free (dropping 1.2 seconds). Her previous best times in those events were from Winter Juniors in the middle of her senior year of high school.

Gumina was a member of the Arizona team for the Pac-12 Championships, where her best finish was 32nd in the 200 free. Her time in that race of 1:49.35 was a second slower than her previous season-best time from an early-February dual meet.

The Aggies badly need to rebuild their freestyle depth: a challenge that last year dropped them to 13th at the NCAA Championships after 12 consecutive seasons in the top 10 (and 6 consecutive seasons in the top 4). Gumina’s season-best time in the 200 free is faster than anybody at A&M has gone this season, and to exacerbate that situation, the team’s top 3 swimmers in the 200 free will all graduate after this year. Gumina will have 2 years of eligibility remaining for the Aggies.

Gumina will begin class at Texas A&M on Monday, the start of the semester, but won’t be eligible to compete for the Aggies until the fall of 2020.

Terrific choice Monica!! Welcome to the defending SEC champions👍. Wishing you the best in the pool & classroom. Gig em forever👍👍👍