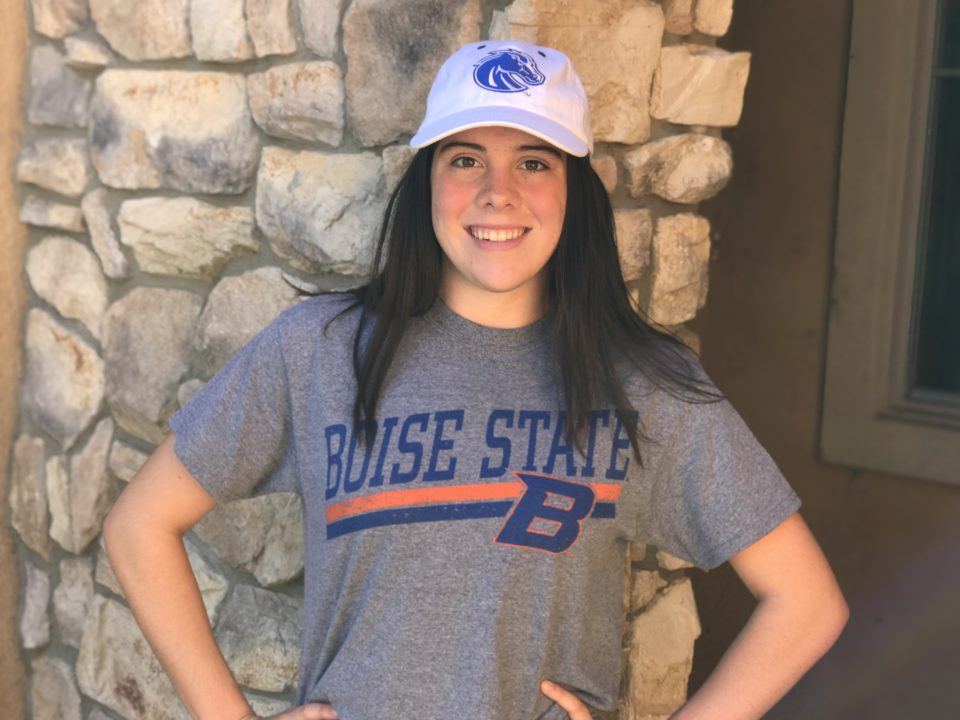 Ariane Skeggs, who moved to Bakersfield, California from Perth, Australia eight years ago, has verbally committed to swim for Boise State University in the fall of 2018.

“I am so excited to announce my commitment to Boise State University Swim and Dive. I chose Boise State because it felt like home. The team and Coaches Kipp, Meghan and Brandon were so warm and welcoming, and their work ethic and goals fit with my own. Boise State University is a good academic fit for me, and I am looking forward to being part of the Bronco family. GO BRONCOS!”

Although Skeggs is originally from Australia, she didn’t pick up swimming until moving to the United States; previously she had been a competitive gymnast. Just before her freshman year at Frontier High School she began to take swimming seriously, and by the time high school season had reached its conclusion in May, Skeggs had won two individual titles at League Championship, then gone on to place third in the 500 free and eighth in the 200 free at 2015 CIF-Central Section Division I Championships. As a sophomore she finished third in both the 200/500 freestyles, and this past season she was runner-up in the 200 free (1:51.84) and third in the 500 free (5:04.93). Skeggs qualified for the 2017 California State Meet in the 200 free; she finished 22nd in prelims.

In club swimming, Skeggs represents Roadrunner Aquatics and specializes in the whole range of freestyle events. She swam the 50 through the 800 at California/Nevada Sectionals this summer, then added the 100/200 fly to her repertoire two weeks later at Western Zones Senior Championships. She finished long course season with new times in the 100/200/400/800/1500 free and 100/200 fly. Her best SCY times include:

Skeggs will suit up for the Broncos next fall with fellow verbal commit Lauren Vitort.