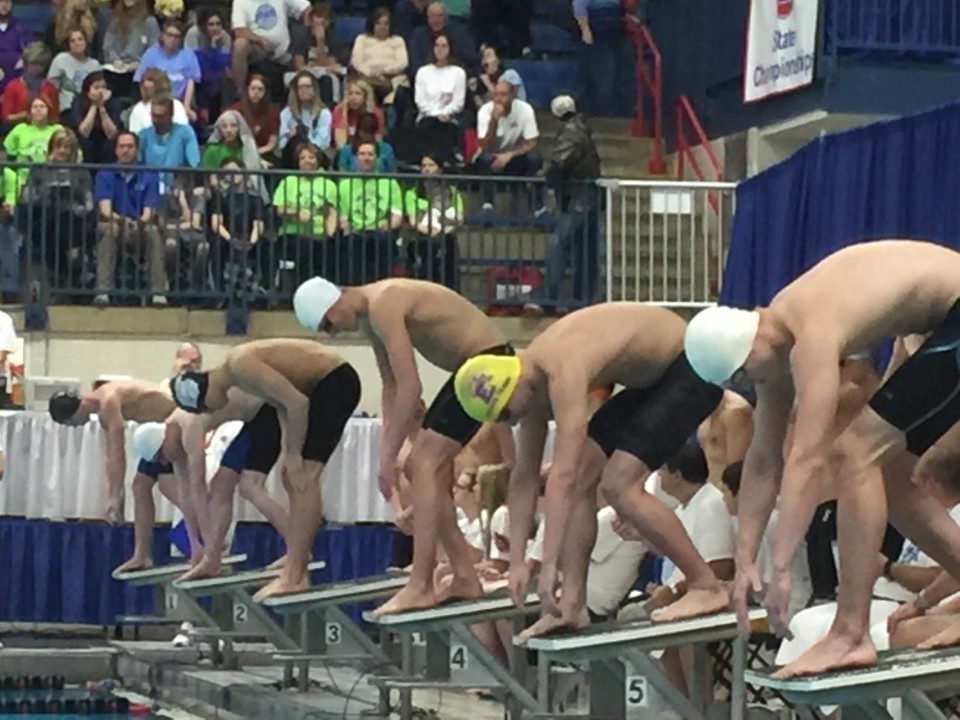 Columbia Rockbridge and Hickman, who swim under one coach, claimed the top two team finishes at the MSHSAA boys final in St Peters. Current photo via Shawn Klosterman

The last time a Columbia school brought a boys MSHSAA Championship title home was 1976. As a matter of fact, no team other than KC Rockhurst had brought one home since 2004, the year Paul Winkeler‘s Hawklet dynasty began. This year Laura Wacker, who coaches all three Columbia High Schools, took the crown back in the most fantastic way possible: with her Rockbridge team taking first, and her Hickman team taking second, in a championship meet electrified by multiple state records, close races and surprises throughout.

Full results with splits are here.

The top seed in the 200 Medley Relay was shared by two teams, Cape Girardeau Central and Staley, who had tied in the prelims at 1:36.94. Cape Central got out ahead and stayed there on a 23.79 backstroke split from Reagan Ragsdale, the only sub-24 second backstroke in the field. Staley stayed in the second position until the last leg, when both Columbia schools put anchors in position to make their move with solid sub-22 freestyle splits. When the dust settled, Columbia Rockbridge and Hickman had dipped below 1:37 to finish second and third with 1:36.83 and 1:36.86 respectively. It was Cape Central though who made the biggest improvement of the heat, separating themselves from the pack and touching .06 under the State Record set by Rockhurst last year. The team of Ragsdale, Sam Hahs, Brogan Davis and John Young set the new record at 1:35.13, and set the tone for a spectacular night of dramatic racing.

The 200 freestyle was an upset as Lee’s Summit North sophomore Liam Bresette turned in monstrous splits of 25.14 and 25.31 to overtake the 2014 Champion, Kickapoo’s Samuel Senn on the second half of the race. Senn turned in a lifetime best of 1:39.46 but it was not enough to hold back Bresette on his way to crushing the State Record set in 2010 by Park Hill South’s Ricardo Maestri by .71 to finish at 1:38.15. Hickman’s John Ragsdell (1:40.04) and Rockbridge’s Alex Tschopp (1:41.05) rounded out the top four in the event.

Vianney’s Nick Alexander had already shaved 1.4 seconds from his State Record 200 IM in Friday’s prelim session to launch the event into the stratosphere with 1:48.15, but did anyone really think he was going to stop there? Alexander went full cosmic in the final, chopping another six tenths of a second from his best time to bring the Missouri mark to 1:47.55. He must have caused some kind of a time warp in that water, because the next two finishers behind him each cut two seconds from their seed times to round out the top three. Dane Florea from Rockbridge snuck past Sam Drew from Lee’s Summit to snatch third place 1:53.68 to 1:53.69. Webb City’s Jacob Schultz cut nearly two full seconds from what was already a huge lifetime best as well, dropping to a 1:50.67 for the runner-up finish.

The 50 freestyle was another title defense, as Park Hill’s Marcin Glebocki fought his way back to the top of the podium from lane 3, turning in 21.23 to sneak past Rockwood Summit’s Max Stapleton who finished in 21.25. Eureka’s Mason Jung cut two tenths from his prelim swim to take the third spot on the podium with 21.45.

The 1-meter diving event featured all of the top three finishers from 2014 taking the same place on the podium this year. Lafayette’s Matt McCool, Rockhurts’s David Knopke, and Peter Lucido from Francis Howell North took the top three spots with scores of 516.35, 513.15 and 475.25 respectively.

The 100 butterfly was a tight race, and anyone in the crowd paying attention could have guessed that it was going to take a faster time that what we had seen in the prelim to win. Cape Girardeau Central’s Brogan Davis was the top seed in the prelim heat sheet and had decided to swim the prelims in a brief, making him a wild card coming in with the fourth place seed. To add to the mystery, Webb City’s Jacob Schultz had blazed a 21.9 50 fly split on Webb City’s 200 Medley Relay leaving people to wonder if he had a little more to give than he had shown in the prelim as well. The race between these two did not disappoint. Davis got out ahead of Schultz at the 50, 23.39 to 23.59, but Schultz managed to bullet through the underwater portion of his last length to steal the lead back just in time to snag the victory at 49.54 over Davis’ 49.64. Max Goldenberg from MICDS (50.90) and AJ Iseman from Rockhurst (51.46) were the third and fourth place finishers.

Samuel Senn successfully defended his title in the 100 freestyle, finishing well ahead of the field at 45.41. The Missouri State commit split 21.28 to the feet at the 50 and never looked back. Hannibal’s Lliot Gieseke edged out the rest of the pack for second with 46.55, leaving Chaminade’s Jesse Jo in third with 46.66. Park Hill’s Marcin Glebocki was also under 47 seconds in the event, taking fourth with 46.87.

Liam Bresette proved he has a back half in the 200, and that same strategy was just as effective for the 500 as well. The Lee’s Summit North sophomore let Alex Tschopp from Rockbridge inch ahead for the first half of the race, but when he made his move it was spectacular. He took the win at 4:29.90, with Tschopp and Hickman’s John Ragsdell taking second and third with 4:31.59 and 3:34.40.

The 200 Freestyle Relay was an extremely tight heat and could have been anybody’s race, but Park Hill senior and 50 free Champion Marcin Glebocki anchored his teammates Jered Weger, Sean Cogley and Danny Jones to the win with a spectacular 20.73 that no one could match, winning the event at 1:27.67. Hickman and Rockbridge collected valuable points with second and third place finishes in the event, as the Kewpies improved their seed time to 1:28.43 and the Bruins snuck past Blue Springs South by .03 with 1:28.94.

After already breaking three state records for the weekend and making it look easy, Nick Alexander did not disappoint in his final effort of the weekend.  He blasted the 100 back, becoming the first Missouri high school athlete to bust through the 49 second barrier, lowering the record he set in the prelim to 48.99. Chaminade’s TJ Halliburton and Kirkwood’s Jack Wever both snuck under the 51 second mark to take second and third in 50.70 and 50.96 respectively.

The 100 breaststroke was as close as you can get without a tie, as Oak Park senior Elliott Eisele-Miller cut .62 from his seed time to snatch the event out of the hands of the top seed from Lee’s Summit, Sam Drew, finishing in 56.87 to Drew’s 56.88. Rockbridge picked up major points with the third and fourth positions in the event as Caleb Rhodenbaugh improved to 58.30 and teammate Zach Lorson finished right behind him at 58.50.

Now this is the part where the average sports fan might think Missouri swimming is a little weird. Several of the best coaches in all corners of the state often coach more than one team. At this point in the meet, Columbia Rockbridge had already secured their victory, but the fight was not over for them. They had teammates on their other team that they needed to take care of. For Hickman to stay in second place, the team from Rockbridge needed to win the last relay of the meet. Even though they go to different high schools, these kids train together and travel together; they share a coach and they share a bond. This is one of those beautiful things that sets swimming apart from other sports… competitors can become friends on deck, and can in a strange way be like teammates who score against each other. Rockbridge, by winning the 400 freestyle relay in 3:11.53, ahead of Eureka’s 3:13.09 and Park Hill’s 3:13.32, had secured a historic victory that now those two teams who thrive together under Coach Laura Wacker could share as the first and second place teams in the state of Missouri. The team of Alex Tschopp, Dane Florea, Ryan Gilbert and Zach Lorson fought to secure a victory for their friends on another team, their cross-town rivals… rivals who are more like brothers, bringing a championship home to Columbia together.

Fun fact: Ricky Maestri set that 200 free state record as a foreign exchange student when he was 16. He then went back to Italy and qualified for their 4×200 free relay in London (I think they got 12th). He’s currently swimming for Arizona.

So Mr. Bressette gets the distinction of having taken a record from an Olympian.