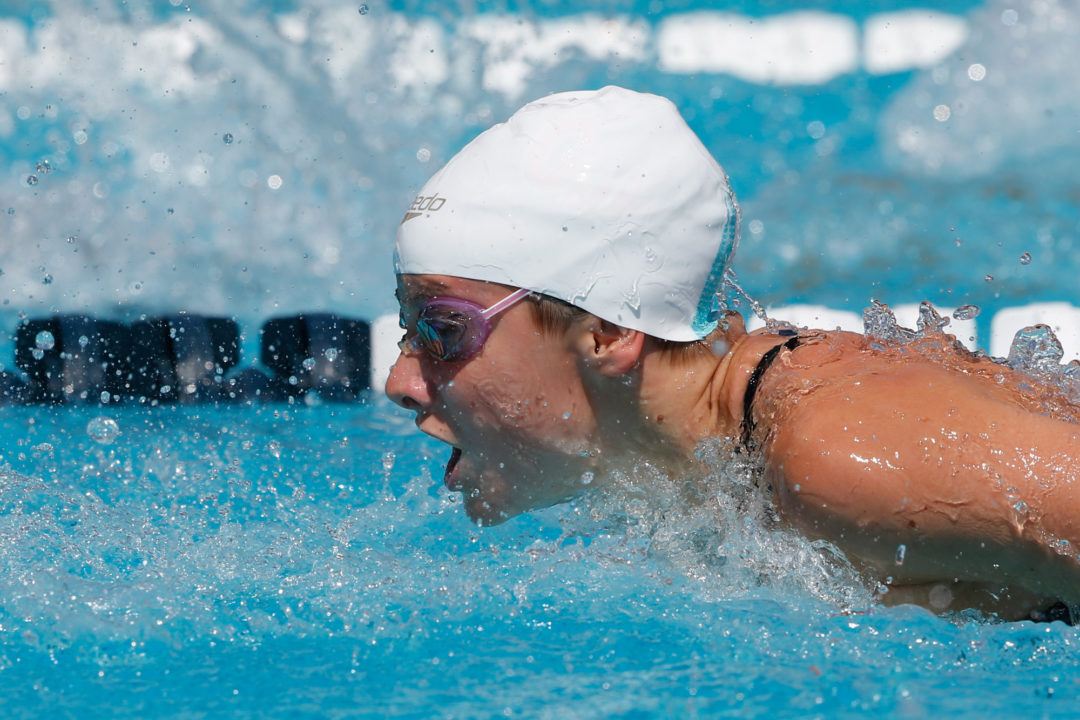 Anchored by a 21.88 split from freshman Talia Bates (above), the Florida women hit the NCAA automatic invite time in the women's 200 free relay on Friday. Archive photo via Tim Binning/TheSwimPictures.com

Florida sophomore Leah Braswell swam the 2nd-best time of her career in the 500 free on Friday night to kick off the 2019 Georgia Tech Invitational in Atlanta.

Braswell’s time of 4:37.25 made her the only swimmer sub-4:40 in the race. That time would have been the nation-leader coming into the weekend, though a handful of swimmers were faster at other invites that kicked off a day earlier on Thursday evening.

Braswell swam a 4:37.8 mid-season last year at this meet, dropped a second off that time at SECs, but added about 5 seconds at NCAAs.

The Florida women opened up the session with 3 event victories, including an NCAA Automatic Qualifying Time in the 200 free relay. The group of Isabella Garofalo (22.45), Emma Ball (22.05), Sherridon Dressel (21.98), and freshman Talia Bates (21.88) combined to stop the clock in 1:28.36. While that put them only a tenth of a second ahead of North Carolina’s runner-up relay (1:28.46), that’s a crucial tenth as it put the Gators under the NCAA Invite time standard. That means that Florida now only needs Provisional Qualifying Times in the other 4 relays to earn an NCAA invite.

On the men’s side, the Florida State Seminoles also punched an NCAA Championship ticket with an “A” cut in the 200 free relay. The group of Peter Varjasi, Kuba Ksiazek, Griffin Alaniz, and Max McCusker combined for a 1:16.98, sliding .19 seconds under the automatic invite time for the NCAA Championships. Florida State graduated 3 of the 4 legs from their 200 free relay that finished 5th at last year’s NCAA Championship meet, but have reloaded. Varjasi is a freshman, Ksiazek is the lone returning member as a sophomore, McCusker is also a sophomore, and Griffin, who led the relay with an 18.89 split, is the lone senior of the group.

It looks like a few UF studs aren’t competing at GT. Going to US open maybe?!?

My boi Griffin was only 0.01 away from the fastest split. He’s always been clutch at relays, and my senior year he demolished some dude at states and split a 45.0 to win. Good memories

Sherridon Dressel’s best time is no 51.76. It’s 50.93 done at last years SEC. That time she swam is her current season best however.

What’s up with Florida distance men at this meet (possibly other groups as I did not look further)? Don’t see Gravley, Finke or Freeman. Florida’s news preview sheds no light on this not being a full meet.

They are going to compete at US Open