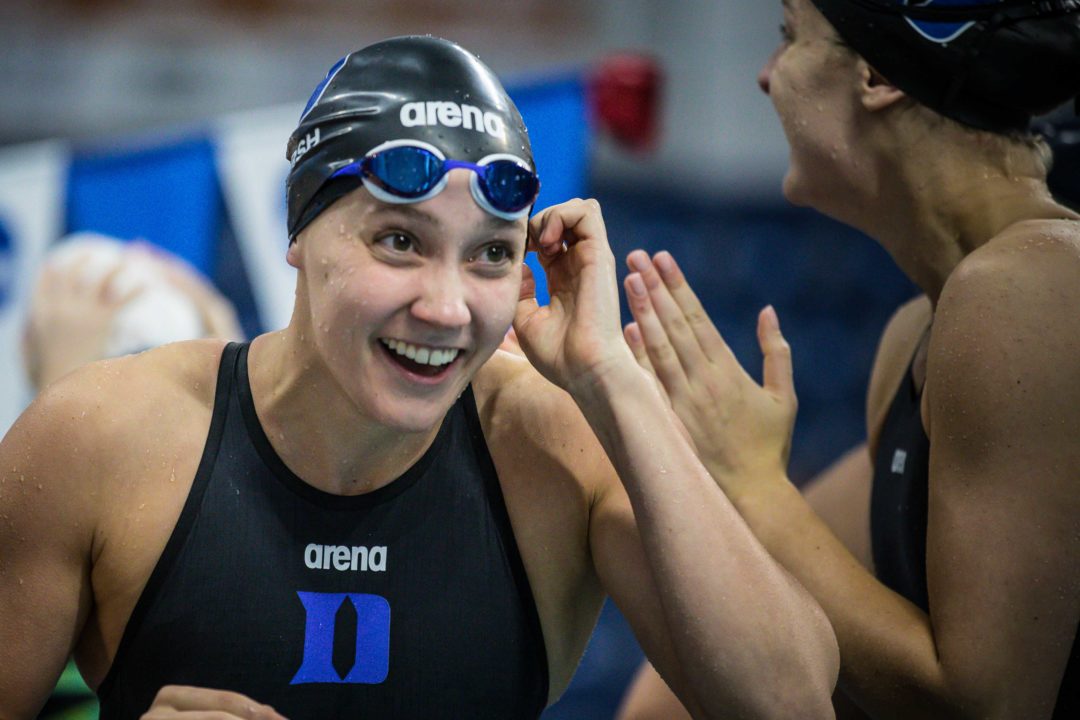 Duke's Alyssa Marsh dominated the women's 100 fly Friday night in Greensboro, winning in 51.25, over a second ahead of the rest of the field. Current photo via Jack Spitser/Spitser Photography

It was all about the Research Triangle in this event tonight, as the schools from the Raleigh-Durham area swept the top three spots.

Leading the way was Duke’s Alyssa Marsh, whose time of 51.25 was just a bit slower than her 51.05 from this morning, but still a quarter of a second faster than she’d ever been before today. She touched over a second ahead of the rest of the field, but there was a spirited battle for 2nd, as NC State’s Kylee Alons edged Duke’s Kylie Jordan by the closest of margins, 52.27 to 52.28.

All three times are well under last year’s NCAA invite time, although Alons and Jordan would probably want to drop a few more tenths to feel safe.

Wisconsin’s Beata Nelson didn’t swim, despite going sub-51 this morning, and will apparently focus on the 100 back tonight.

There weren’t any huge drops from this morning, but swim fans still got treated to a 50.0, courtesy of Beata Nelson. That’s her 7th-fastest swim ever, and her fastest time in November, except for the 49.67 she put up at last season’s Texas Invite.

NC State freshman Katharine Berkoff took 2nd in 51.97, about a second off of her lifetime best, while Alyssa Marsh took 3rd in 52.65 after winning the 100 fly earlier this session.

NC State got out of the gate strong, dipping well below the NCAA Automatic Invite time with a 1:35.92. Katharine Berkoff led off in 24.26, Sophie Hansson split a very strong 26.73 on breast, and Sirena Rowe and Kylee Alons brought things home with 22.95 and 21.98 splits on fly and free, respectively.

Duke came in 2nd with a 1:36.66, just a quarter of a second off o the NCAA auto time standard. Emma Shuppert kept things close with a 24.42 leadoff before handing things over to Halle Morris, who split 27.65.

The big split came on fly, though. Assuming the results are accurate, Alyssa Marsh threw down a 22.14, only two-tenths off the fastest split ever, and faster than Duke’s anchor leg of 22.45 by Sarah Snyder.

Those were the only two schools under either NCAA cut, as Wisconsin’s took 3rd with a 1:38.92, with Beata Nelson‘s 23.98 leadoff leg the highlight for the Badgers.

absolutely dont believe you. side breathing seemed to be a lot more common 10 years ago and has mostly vanished. the flipturns require so much precision and flexibility, i dont see it being useable for many swimmers at all

Yeah, I hear Dressel and Milak are switching to it after reading your post.