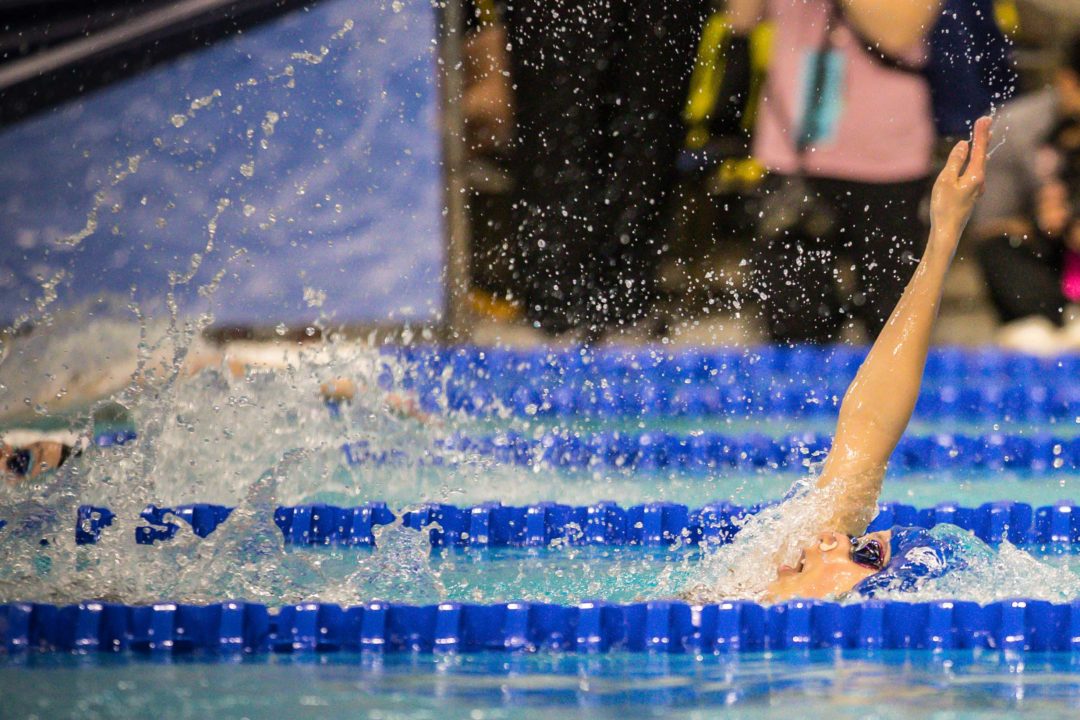 Senior Asia Seidt was a big part of the Wildcats' big night, helping the team to dominant performances in the 800 free relay and 100 back. Current photo via Jack Spitser/Spitser Photography

The Kentucky Wildcat women closed out the night’s action with arguably the most dominant performance of the entire session, a 7:01.40 victory in the 800 free relay that was over 11 seconds faster than any other squad’s time. Asia Seidt led off in 1:44.92, almost three seconds than her previous official best time of 1:47.84 from early 2016. Freshman Beth McNeese split a solid 1:46.80 after swimming a three second lifetime best of 1:47.32 earlier in the session. Sophomore Riley Gaines split a solid 1:45.13 on the third leg, and Ali Galyer anchored in 1:44.55, the fastest split in the field.

That’s just off the NCAA ‘Automatic’ time, and is among the fastest times in the nation this season. The Ohio State women finished 2nd in 7:12.07.

Unsurprisingly, the Kentucky women, long known for an elite backstroke group, also dominated the 100 back earlier in the evening, taking three of the top four spots. Seidt won in 51.58, while fellow senior Galyer took 3rd in 53.07. Sandwiched between them was freshman Caitlin Brooks, who shaved a few hundredths off her lifetime best for a new best time of 52.21.

The Notre Dame men dominated the 400 IM in similar fashion, racking up five of the top six times, with four of those times coming from freshmen and the other from a sophomore. Freshman Jack Hoagland has had a strong opening few months of his college career, and continued that momentum tonight by winning in 3:46.95, taking over two seconds off his previous lifetime best.

The men’s 200 free turned out to be another exciting race, as the top three men finished within a tenth of a second of each other. Notre Dame’s Zach Yeadon came home in 23.86 to run down teammate Sadler McKeen and OSU’s Paul Delakis. The Fighting Irish sophomores ended up touching exactly together in 1:34.87, while Delakis ended up 3rd in 1:34.97. Ruslan Gaziev, who’s training at OSU while redshirting for the Olympic year, but swimming unattached for this meet, was just a whisker behind Delakis, finishing in 1:35.02.