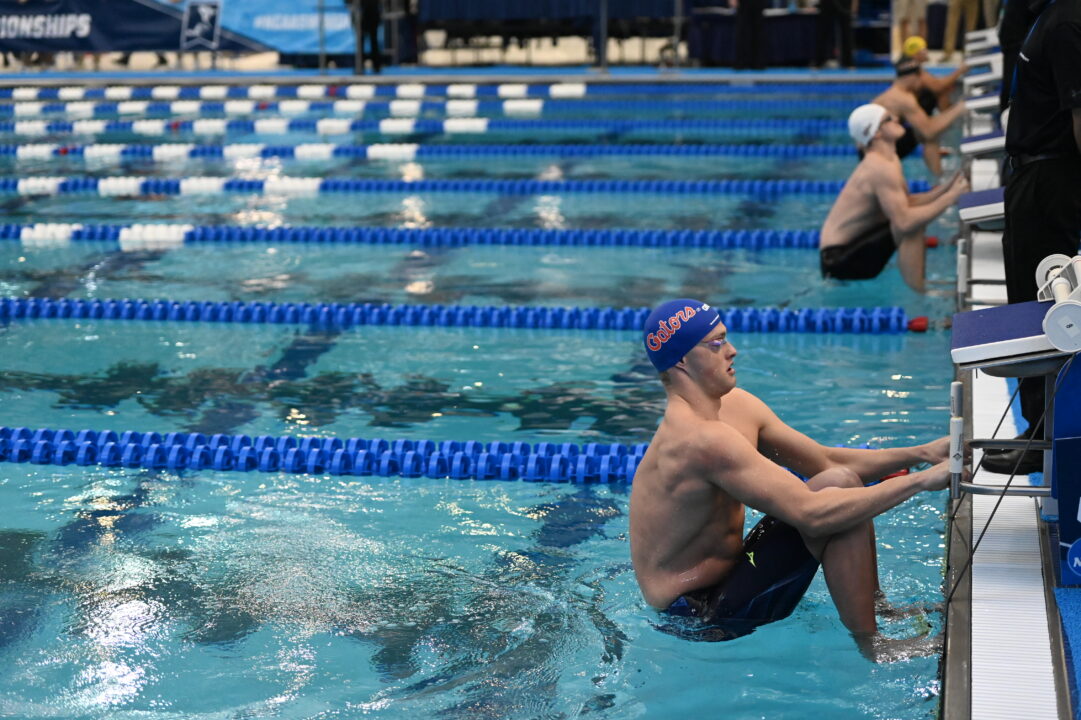 The time would have won the men NCAAs last year, and it featured a 20.32 performance from Adam Chaney on backstroke, the No. 3 performance ever. Archive photo via

The Florida men broke the SEC meet record in the 200 medley relay with their time of 1:22.06, narrowly breaking the previous meet record of 1:22.19. The time also broke one of Caeleb Dressel’s school records–Florida’s previous record in the event was 1:22.33.

In the process, Adam Chaney split a 20.32 during the backstroke portion of the relay, making him the 3rd-best performer with the 3rd-best split ever in the event. The only swimmers and times ahead of him are Ryan Murphy’s 20.20 and Zane Waddell’s 20.22. Waddell also swam his best 50 back time during the SEC 200 medley relay, back in 2019.

Despite breaking the SEC meet record, Florida did not break the SEC conference record. Alabama still holds that record at 1:21.89, set by Connor Oslin, Pavel Romanov, Luke Kaliszak and Waddell in 2017.

The NCAA record is just as old, set during the 2017 championships by Texas, whose John Shebat, Will Licon, Joseph Schooling, and Brett Ringgold swam a 1:21.54.

Both Freise and Mestre competed at the 2020 Olympics for different countries (Germany and Venezuela). This is also Mestre’s first time competing with Florida at the SECs, having transferred as a grad student from Stanford.

Chaney, Hillis, and Friese all competed at NCAAs in the 200 medley relay for Florida, competing with then-junior Will Davis for a time of 1:22.41, which earned them 2nd. If they had swam this time last year, they would’ve beaten Louisville’s 1:22.11 to take 1st.

sure would be nice if these meets we televised

Look what happens after Troy leaves!

How dare they beat swim god Caeleb Remel Dressel they should all be banished from school!

I love how the first three splits were much faster than the old Florida record and they almost got “run down” by that Dressel split. Kind of makes you wonder what it would look like if the races took place side by side.

Great swim. But I think that there has to be a bit of an asterisk by it with the open lanes. I guess we’ll see at NCAAs if the fast relay times hold up, if they’re not going open lanes. Anyone know if there are?

Remel is a gift from god.

This is gonna be a really exciting meet for Chaney