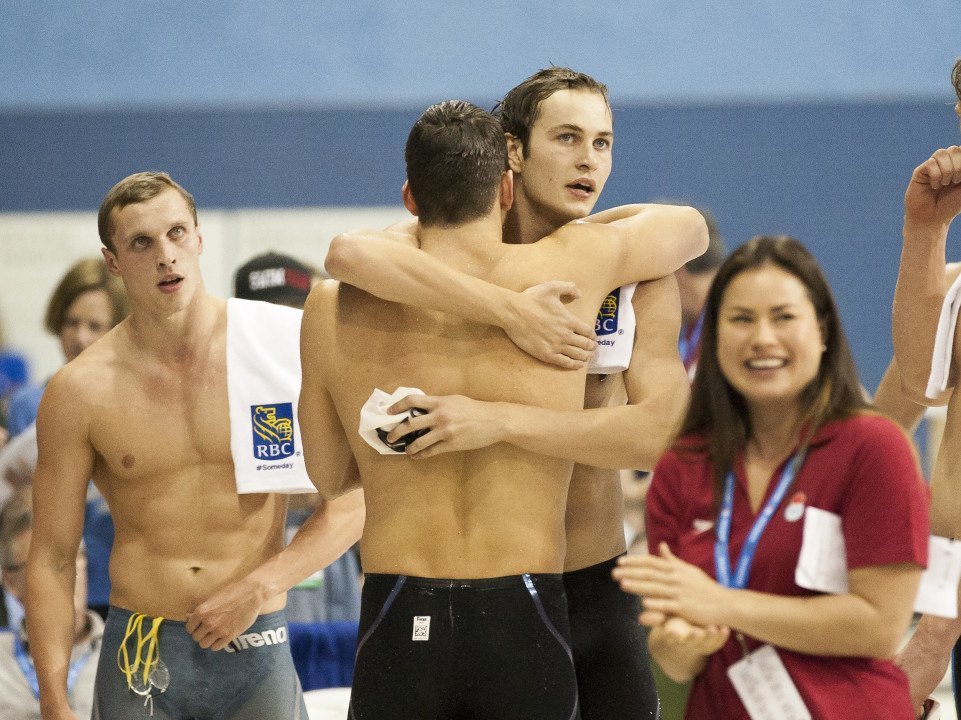 The men's 4x100m freestyle relay is going to be packed with young talent. The average age of the four swimmers who made the team is just over 20-years-old, a very young average compared to other sporting nationalities. Current photo via Chris Tanouye/www.christanouye.com

After a fourth place finish in the 100m fly earlier in the meet, the 200m butterfly final tonight was Audrey Lacroix’s final chance to make her third Olympic team.

Having already represented Canada at the 2008 and 2012 Olympic Games, Lacroix was ready for another one as she dove in and flew under the FINA ‘A’ qualifying time, solidifying her spot on Canada’s Olympic squad with a first place finish.

These Olympic Games will be Lacroix’s last.

The men’s 4x100m freestyle relay is going to be packed with young talent. The average age of the four swimmers who made the team is just over 20-years-old, a very young average compared to other sporting nationalities.

Santo Condorelli led the way, touching in at 48.16 after putting up a 48.09 this morning in prelims. Condorelli’s time gives him the chance to go to Rio as does Yuri Kisil’s time of 48.58. Kisil went exactly the same time he swam in prelims, which doubles as a best time for him.

Running third and fourth behind the two leaders were 18-year-old Markus Thormeyer and Guelph’s Evan Van Moerkerke. The four will be representing Canada on the 4x100m freestyle relay in Rio.

A long time coming, Erika Seltenreich-Hodgson made her first Olympic team with a second place finish in the 200m IM behind Sydney Pickrem. Seltenreich-Hodgson clocked in a 2:12.47 at the wall and was beaming ear-to-ear once she realized that she was headed to Rio.