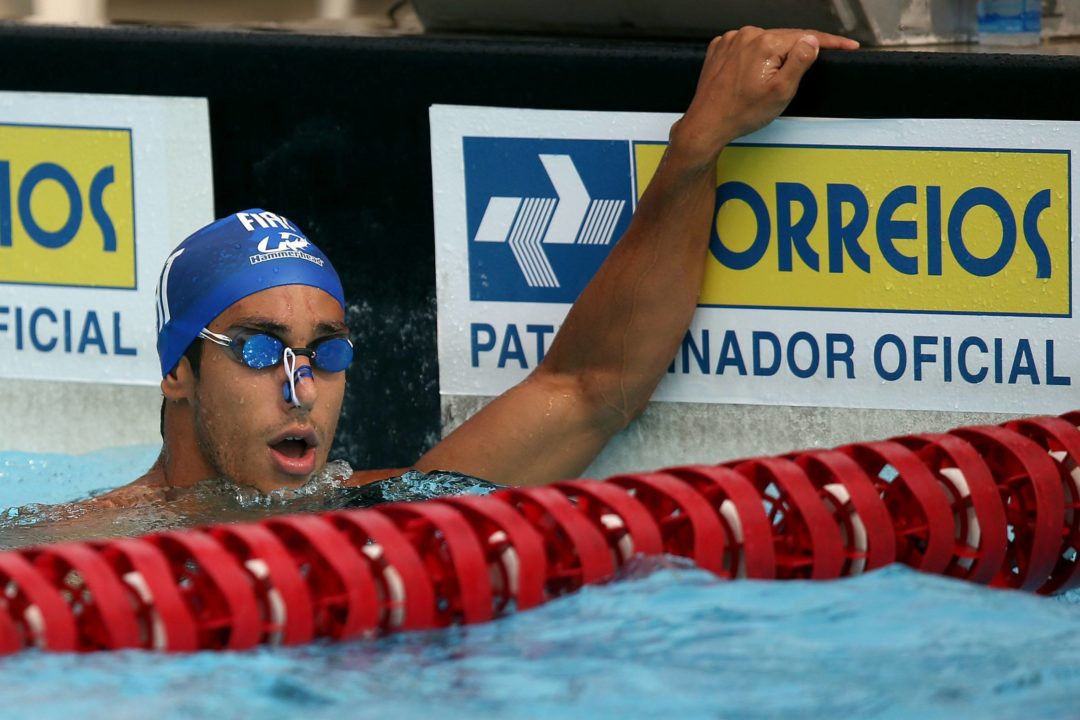 Just three medal-bearing races were on the agenda for today, but there were certainly thrills enough to fill the entire session.  Here are some key points we learned from Day 5 Finals of the 2015 World University Games in Gwangju.

1. Americans Were Winless – Team USA has racked up at least one gold medal on each day thus far in the competition, but such was not the case in today’s races.  With just three finals, the gold medals were spread across three different countries today – Japan, Brazil China.  Jack Conger came painstakingly close in the men’s 100m freestyle event, missing out on the top of the podium by just 4/100 to wind up with silver.  For the American women, Andrea Cottrell was the highest finisher, earning a fourth-place position in the women’s 200m breaststroke.

2. Freestyle Heartbreak – In that men’s 100m freestyle final, Jack Conger launched himself off the blocks and sped his way to the 50m mark in a solid first place, with Brazilian Henrique Martins hot on his heels, but still about a half of a second behind.  However, at just about 20m to go, Martins caught up to Conger and would ultimately touch out the American by just .04 of a second.  Martins’ time of 48.98 won gold, while Conger’s 49.02 took the silver, with both men earning personal bests.  Conger looked markedly disappointed both in the water immediately after the race, as well as on the podium. The result signifies the first time Martins has gone sub-49 and he is the third Brazilian to do so thus far in 2015, joining countrymen Matheus Santana (48.78) and Cesar Cielo (48.97).  For the USA, Nathan Adrian remains the only male under 49 seconds in the event, with his 48.85 clocking at the Arena Pro Swim Series in Charlotte this past May.

3. Scorching 100m Butterfly Semi – Two swimmers earned memberships into the sub-52 club today, as Italy’s Piero Codia and Russia’s Evgeny Koptelov clocked 100m butterfly times of 51.75 and 51.86, respectively, to lead the field and land within the world’s top 10 times for 2015.  It marks the first time that each swimmer has dipped beneath the 52-second mark, as Codia’s best time prior to this was 52.16 and Koptelov was sitting on a best time of 52.04.  For perspective, even with big names such as Ryan Lochte, Tom Shields, and Giles Smith having already swum this event in 2015 for Team USA, Jack Conger stands as the only American to register a time in the 51-range so far this year, with the 51.64 he earned at the Arena Pro Swim Series in Austin.

4. Unrelenting Breaststroke Speed – Although, Italy’s Andrea Toniato semi-final time today of 27.35 was off of his meet record-setting mark of 27.06 from heats, he still charged his way to the top seed and the man to beat headed into the 50m breaststroke finals.  He is joined by Russia’s Kirill Prigoda who touched behind Toniato in the same 2nd semi-final, earning his own personal best of 27.56.  Also earning PBs on the day were USA’s Carsten Vissering and DJ MacDonald, both of whom rocked sub-28 finishes for the first time in their respective careers. Vissering registered a 27.93 and MacDonald earned a 27.75 to each make the final.  Vissering was only one of two swimmers from the first semi to make it into the final, further demonstrating just how tight this speedy 50m breast field is at this meet.

5. Another Possible 1-2 American Freestyle Finish – Yes, it was only the semi-finals, but it has got to be encouraging to Team USA that the only two women to register sub-2:00 200 freestyle times were from the United States. Shannon Vreeland led the charge from semi #1, where she came away with an easy, comfortable-looking win in a time of 1:59.15.  In the second semi, Leah Smith followed suit, touching in 1:58.79, to set these two freestyle aces in the middle of the pool for tomorrow’s final.  Vreeland is aiming for her second individual win, after having already clinched the gold in the 100m freestyle earlier this meet, with teammate Abbey Weitzeil claiming silver.

BONUS #6 –  If you haven’t checked out the live feed of the competition, do yourself a favor and watch LIVE.  The feed is terrific (at least within the United States, ESPN3), giving a very clear view of each race, including underwaters. Plus, you will be treated to the aquatic venue’s whole pump-up crew, including some very energetic, eclectic dancers and an extremely lively and loud MC!