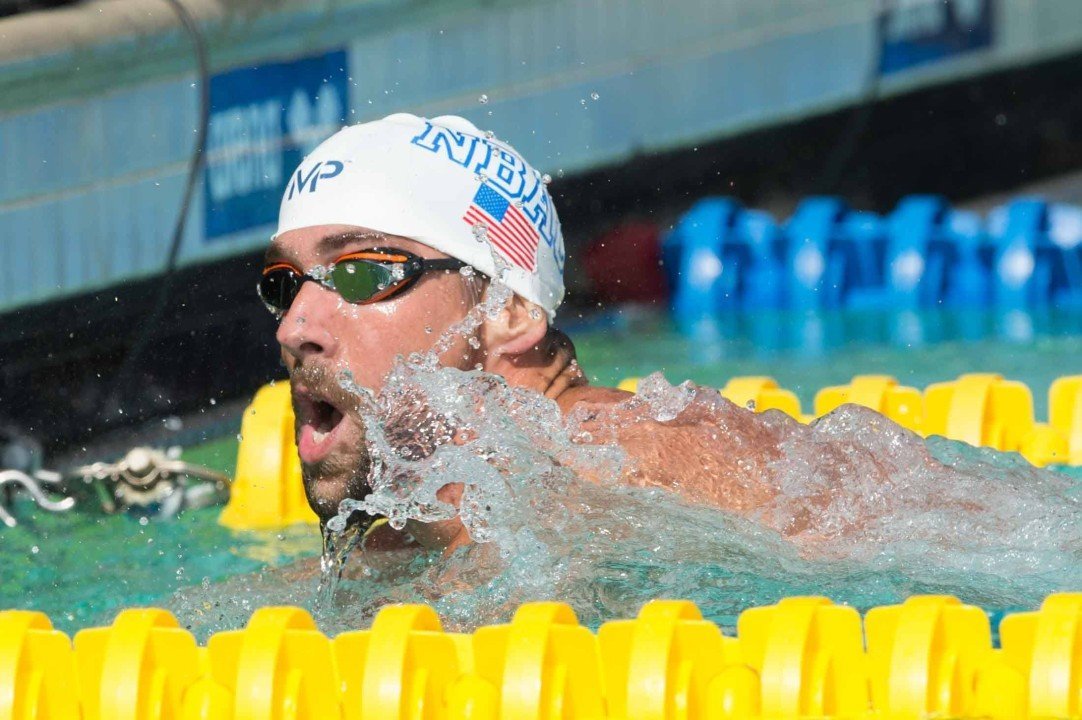 Phelps' management said he will not be competing in France because he wants to concentrate on the US National Championship meet in San Antonio. Archive photo via Mike Lewis/Ola Vista Photography

Lacourt Set to Take His Second Gold in Chartres

Camille Lacourt put up the morning’s fastest 50 backstroke time of 25.41…

Béryl Gastaldello lowered her own French National Record in the women’s 50 meter backstroke to 28.01 on Saturday at the Paris-Chartres stop of the FINA/airweave Swimming World Cup 2015.

In December during Michael Phelps‘ 6 month ban from competition, the French sports outlet L’equipe reported via comments from an official of the French Federation that Phelps would be making his return to international competition at the new French-based stop of the 2015 FINA World Cup Series on August 15th and 16th.

Today, however, Phelps’ management revealed that he will not be swimming at the Paris-Chartres stop of the 2015 FINA World Cup Series as reported back in December. The French meet does not directly conflict with US National Championships, but his management told SwimSportNews today that he will not be competing in France because he wants to concentrate on the national meet in San Antonio.

Before his first retirement in 2012, Phelps was never a frequent visitor to the FINA World Cup Series, though he did make stops in Berlin and Moscow in 2011, and a few others scattered earlier in his career (2006, 2002). He has always been a frequent visitor to France, however, competing for many years in the Paris Open.

The Paris-Chartres World Cup is the second stop of the 2015 FINA World Cup Series. The full schedule can be found below:

My guess is he wants a small break after Nationals and then get back to training.

This is really great to see! It’s great to know that he is choosing one meet and putting everything he has into it. We will be able to see what he is capable of achieving when fully tapered. I get kind of tired of always trying to guess whether or not an athlete is saving their full strength for a different meet.

Given how little competition he has been able to partake of in the last 3 years, is it likely that he may make it to other stops on the tour?

MP has stated that he will (or maybe he already has?) move to Tempe and train at ASU with Bob Bowman. Will he remain attached to NBAC for the duration?

They should try to change France’s name into “Republic of Paris and its suburbs”, it would be easier.

Same thing about the olympic games bid of Paris. They seek the support of the whole country, but the country has nothing to gain, and if there are big investments to be made in a french major city, it’s certainly not in Paris.

This meet pays athletes to attend which is why he went in the past. Phelps doesn’t need the money obviously so probably decided it wasn’t worth it.