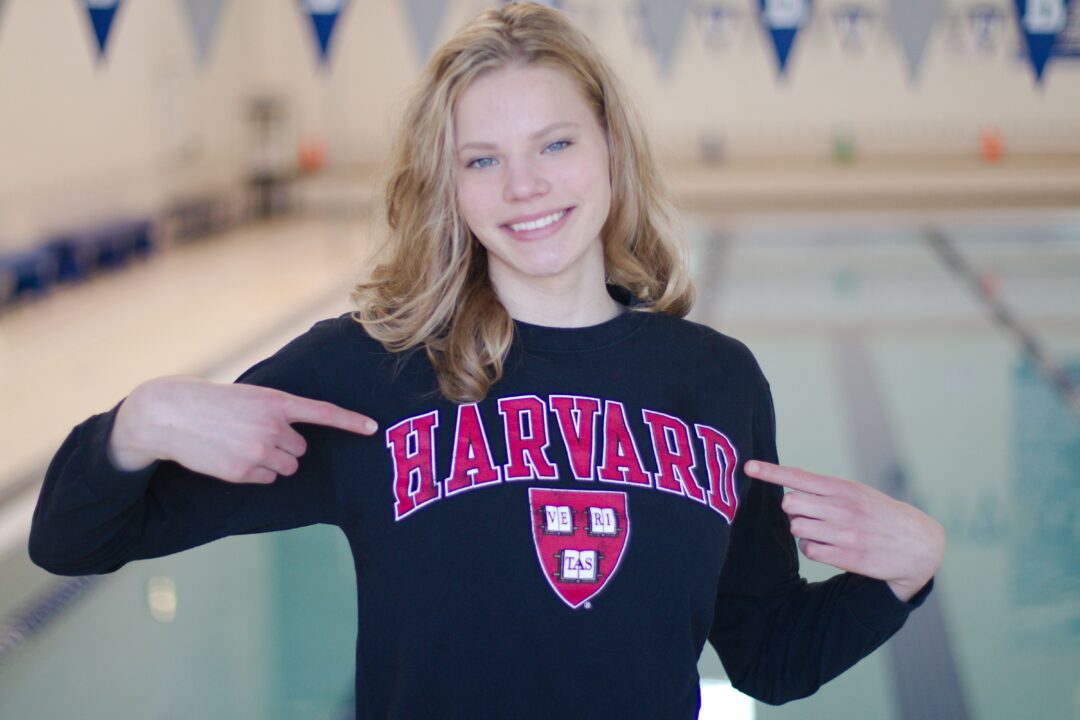 Harvard hosted Rutgers for a women's dual meet at Blodgett Pool on Friday, emerging victorious in a 169-131 decision. Stock photo via Anya Mostek

Harvard hosted Rutgers for a women’s dual meet at Blodgett Pool on Friday, emerging victorious in a 169-131 decision. Rutgers pulled out wins in both relays, though they would go on to lose the meet.

The 200 medley relay was a great race, seeing Rutgers swim a 1:42.53, touching 0.03 seconds ahead of Harvard (1:42.56). Harvard jumped out to a lead, with Anya Mostek leading off in 25.67, faster than Rutgers lead-off Alice Scarabelli‘s 26.04. Rutgers took over the lead on breaststroke, with Rachel Kimmel splitting 28.49, much faster than Harvard breaststroker Victoria Eisenhauer‘s 29.32. Harvard cut into the lead slightly on fly, with Abigail Carr splitting 24.71 to Sofia Lobova‘s 24.88 for Rutgers. Sofia Chichaikina was able to hold off Harvard’s Darlene Fung on the anchor, splitting 23.12 to Fung’s 22.86.

Madison Murtagh was great for Rutgers, sweeping the distance events. She kicked things off with a win in the 1000 free, swimming a 9:59.00. With the performance, Murtagh is now the fourth swimmer in Rutgers history to break 10:00 in the 100 free.

Harvard swept the sprint free events, starting with Darlene Fung taking the 50 free in 23.55. Samantha Shelton would then take the 100 free in 50.92, establishing the lead on the first 50 and holding it through the finish.

Rutgers’ Rachel Kimmel swept the breaststroke events. Kimmel swam a 1:02.94 in the 100 breast, posting the fastest split in the field on both 50s of the race. Kimmel then went on to post a 2:16.55 in the 200 breast, again getting out to an early lead and maintaining it.