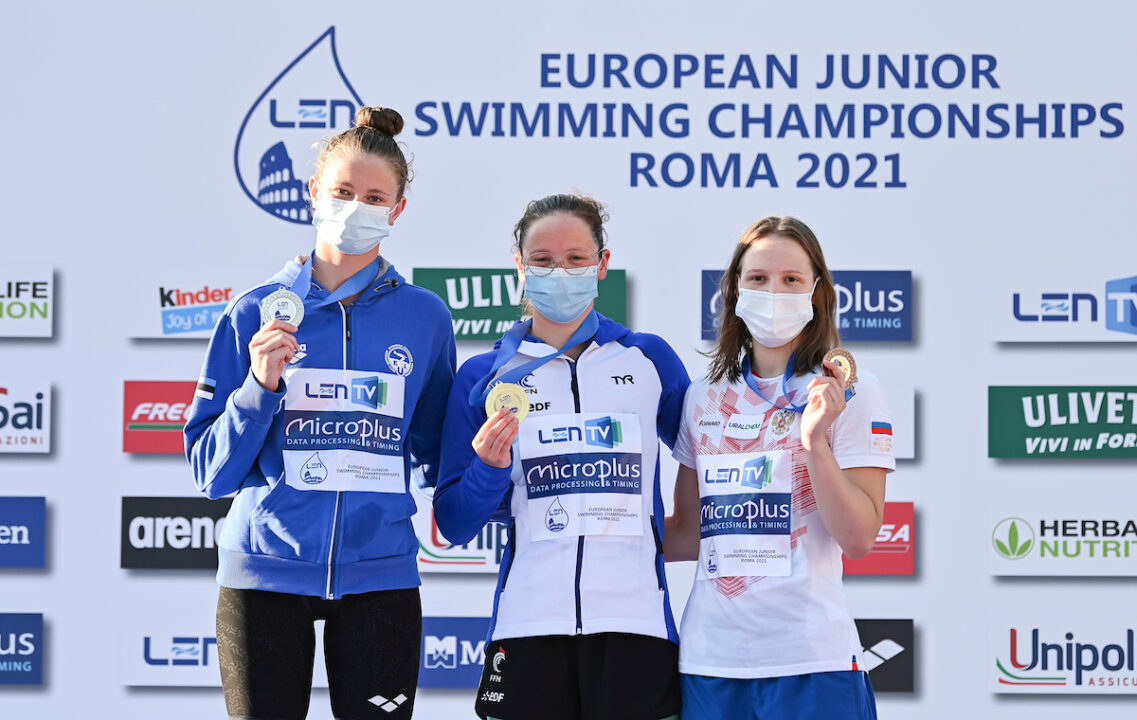 While no one who made the Tokyo Olympics 200 breast podium is in Berlin, 17-year-old Lydia Jacoby, the 100 breast gold medalist, is and she finished 4th this morning.

The Netherlands’ Luc Kroon touched the wall 1st in the men’s 400 free with a 3:41.94, about 2 seconds off his best time from December 2020. He was more than a second ahead of South Africa’s Matthew Sates and German distance star Florian Wellbrock who finished 2-3 this morning.

The women’s 50 back was an incredibly tight race between Olympians Kira Toussaint of the Netherlands and Maggie Macneil of Canada who claimed the top two spots in tonight’s final with a 26.19 and 26.25, respectively. Toussaint dropped her fastest 50 back time, 25.60, in November 2020 while this was a lifetime best for Macneil by 1.3 seconds.

USA 16-year-old Tess Howley 17-year-old Charlotte Hook went 1-2 during the women’s 200 fly prelims, with a 2:08.02 and 2:08.85, respectively. Zoe Dixon squeaked into the final in 8th place, bringing the number of American teenagers in the final up to 3 (nearly 4 with Paige Kuwata as the first alternate.)

Three-time Olympian Chad le Clos of South Africa swam the 100 fly, finishing 2nd in prelims behind, .60 behind Hungary’s Szebaztian Szabo who touched the wall at 50.48. Szabo was not far off his lifetime best time of 49.75 from the International Swimming League in November 2020,

Tokyo silver medalist Arno Kamminga of the Netherlands blasted a 56.48 in the men’s 100 breast to claim the top spot in finals, more than half a second ahead of Germany’s Fabian Schwingenschlogl who took 2nd. The youngest finalist is USA’s Zhier Fan who is ranked 5th at 17 years old.

Australian swimmers destroyed the 50 free on both the men and women’s sides. Emma McKeon posted the fasted time in the women’s race with a 23.84 while Sweden’s Michelle Coleman is 2nd going into tonight’s final (23.92). McKeon came within .24 of her lifetime best time from the International Swimming League 3 weeks ago. Kyle Chalmers won the men’s 50 free (21.18) by a slightly larger margin of .14 to 2nd place finisher Hungary’s Szabo who will have an exciting double if he swims both the 100 fly and 50 free in finals.

The fastest time in the women’s 100 IM came from Israel’s Anastasia Gorbenko who was one of only 3 swimmers under 1:00, touching the wall at 59.03. Sweden’s Louise Hansson and the Netherland’s Kim Busch also cracked the mark and are 2-3 going into the final. The youngest competitor will be USA’s Leah Hayes who’s ranked 5th at 15-years-old.

Any tricks to watch meet?

You can watch it here. No vpn needed for me
https://aquatics.eurovisionsports.tv/home?id=J037sbwGmvZ09MGIIZxXtLeaN

They also live stream it on fina youtube channel but vpn is needed.

Where is a good place to get a vpn? Best deal?

ExpressVPN with a free trial

I didn’t see it on Youtube. Which country VPN works?

Respect to that username

I miss the days of FINAtv! The live stream doesn’t work – it seems they are only showing replays but even then they only have posted the first four events. What a sh** show

I can’t even get that much. Just the ads.

That’s all i got until I pressed the Swimming tab, takes you to the replays (they now have every event).

How about the college freshman getting 4th in 100 im

How about the other college freshman getting 1st in 100 IM?

2
0
Reply
Uhhh
Reply to  JP input is too short

How about the other 17 year old getting 1st in the women’s 100 IM final and equaling the top ISL time this season?