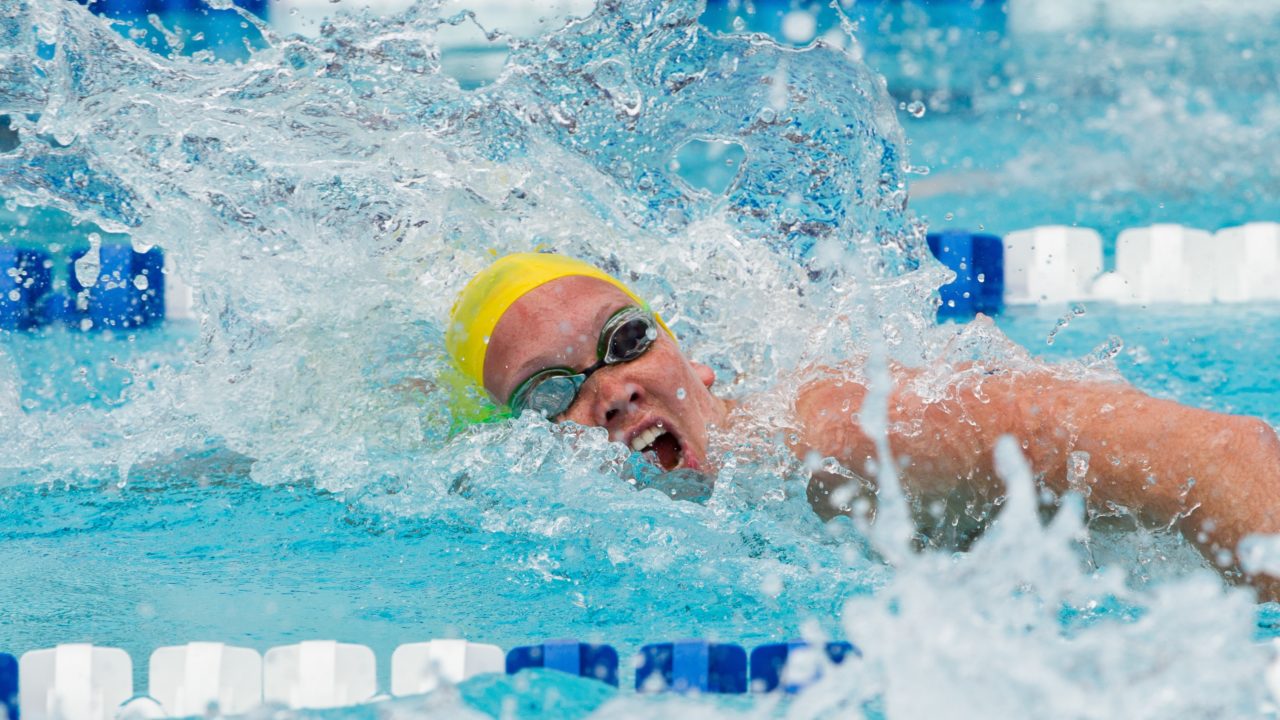 FINA has released its official statement regarding the positive doping test findings for Australian record holder and 2008 Olympic gold medalist Kylie Palmer.  As just reported yesterday, Palmer has withdrawn from 2015 FINA World Championships under a voluntary provisional suspension after being notified of a positive doping test dating back to 2013.

Per FINA’s statement, as part of an in-competition doping control test on July 31, 2013, a sample from Palmer “showed low levels of a prohibited substance.” The statement also reveals that, per the request of FINA’s Doping Control Review Board (DCRB) two additional tests were performed in 2013, which both proved negative.  As a result, in January 2014, the FINA DCRB recommended that “no further action was needed” and decided not to proceed with the case given the low levels detected of the prohibited substance, as well as the absence of the same substance (or any others) in the subsequent tests.   The substance has still yet to be disclosed, although The Courier speculates the substance to be of the diuretic variety.

In a twist, however, in February of this year, the World Anti-Doping Association (WADA) requested that FINA provide documents specifically attributed to Palmer’s case.  After reviewing such documents, WADA then decided to file an appeal with the Court of Arbitration of Sport (CAS) in Lausanne, requesting CAS to order FINA to “bring forward the July 31, 2013 findings as an anti-doping rule violation in accordance with DC 7.1.3.”   This led to FINA’s notifying Palmer and Swimming Australia of the positive test from 2013 and Palmer’s subsequent acceptance of the voluntary provisional suspension. Note – copy of DC 7.1.3 direct from FINA’s Doping Control Rules is provided in its entirety at the end of this article.

Doping Code 7.1.3 indicates that, unless a therapeutic use exemption (TUE) was provided, FINA should promptly notify the athlete, the athlete’s member federation, the athlete’s national anti-doping organization and WADA of the anti-doping rule that was indeed violated.  The code also indicates that FINA shall promptly notify the athlete of his/her right to promptly request the analyses of the B sample (or waiver thereof).  As such, WADA must indeed be questioning why the athlete and her federation were not notified immediately after the initial positive test, as well as why no additional action was taken at the actual time of the incident.

Swimming Australia told the Sydney Morning Herald today that it is unlikely that an expedited hearing for Kyle Palmer will take place to reinstate her for Worlds, saying there is “no indication at this stage that FINA will assemble its Doping Tribunal in time for Palmer to take to the water in Russia.”

For its part, Swimming Australia is also questioning the time span between when the positive samples were taken and then FINA’s response.  In a statement issued via the Australian Swimmers’ Association, Palmer said she had ‘no idea how the prohibited substance came into her system and is continuing to investigate the matter to the extent that she is able given the passage of time’.  Swimming Australia Chief Executive, Mark Anderson summarizes SA’s present stance as follows: “Suffice to say that clearly we have been concerned about the length of time that it’s taken and have expressed our concern to FINA.” Anderson further stated that the time span situation “does create difficulties. We are very mindful of that.”

Anderson also indicated that Palmer’s continued financial assistance is a matter that will likely be decided on once more steps with towards resolution of this ordeal have been taken with FINA. Said Anderson, “Kylie needs to contest this case as an individual and we can’t impact on that. It’s important we don’t. In terms of athlete payments, at the moment there’s no position. We’ll wait for the process to unfold and see what the findings are.”

Does anyone know what the illegal substance was? I think that matters. If it was THC or an opioid it could come from exposure to smoke or a poppyseed muffin. Low levels could be explained and.would seem minor. If it was EPO or a synthetic steroid, FINA looks like they were hiding a serious offense.

I believe it was a diuretic.

That’s a tough loss for the AUS 4×200 relay. I imagine this is “shrouded in ambiguity” because of her upcoming appeal. Nevertheless, if I were in Swimming Australia’s shoes I’d be furious with FINA for not informing the athlete back in 2013 and equally furious with WADA for not requesting test results until 2015.

I agree with Billabong – how can an athlete defend against accusations if FINA fails to notify in a timely manner? And how can she be forced out of a meet 2 years later without due process? This smells fishy and is just another reason why FINA must go.

The whole thing is clouded in this shroud of ambiguity. What was the banned substance, how does it take this long to figure out whether someone tests positive? The whole thing reeks of incompetence on the part of WADA.

so did they test the B sample or not? Also it should be a black and white thing. Does the rule allow for trace amounts and you still pass or you fail if any trace amount is found? Its one or the other so why is it so hard to administer the policy..

This is a pretty shabby process. How is she supposed to defend herself?