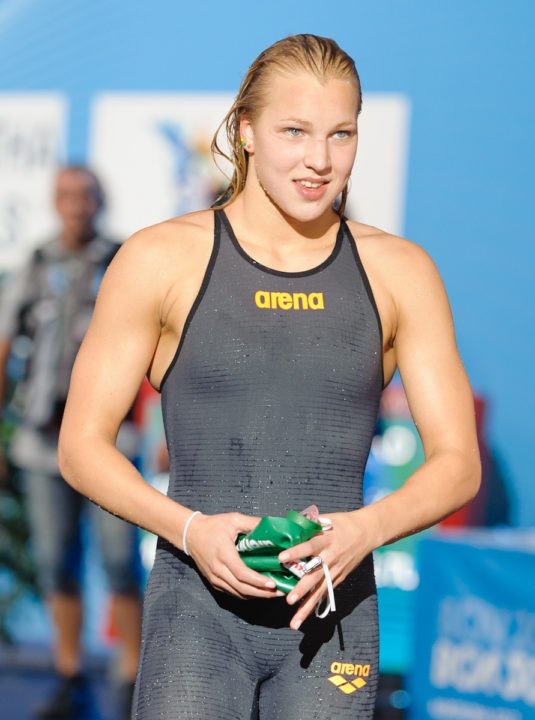 Day 3 of the 2013 FINA Junior World Championships are underway in Dubai, UAE, and we’ll be recapping events as close to real-time as we can.

Everything you need to follow the meet can be found here.

Today’s evening session will be a little lighter than Tuesday’s, with the following events schedule:

Russia’s Svetlana Chimrova still was unable to go a best time and match what she did at the World University Games, but she did swim a 26.40 in the semi-finals to break her own Championship Record from prelims. That swim is also faster than she was when she semi-finaled at the World Championships a month ago.

Lucie Svecena from the Czech Republic is on target to become yet another “first medalist for her country in the history of Juniors,” as we’ve seen a lot of this week, after taking the 2nd seed in 26.77. Things get very bunched-up behind her as Australia’s Jemma Schlicht, Australia’s Stephanie Whan, and Hungary’s Liliana Szilagyi touched in 26.95-26.97-26.98 in the semis.

Frederique Cigna from Canada was 6th in 27.08, and Lithuania’s Ruta Meilutyte, taking on a triple on Wednesday, was 7th in 27.14. She’s showing very good versatility at this meet, and with her lightning-fast start, she rebroke the National Record she set in prelims that had been 27.72 (from Grite Apanaviciute in 2009).

France’s Cloe Hache rounded out the final 8 in 27.21, while the top-finishing American Katie McLaughlin missed by .01 seconds, posting a 27.22 for 9th. The other American, team captain Courtney Weaver, was 13th in 27.51.

The showdown is set. In what should be the most high-powered final of the entire meet, the top three seeds out of the semis in the boys’ 50 free went to Australia’s Luke Percy in another new Championship Record of 22.11, which breaks his 22.13 from prelims; Russia’s Evgeny Sedov in 22.31; and American Caeleb Dressel in 22.41.

For Dressel, who recently aged up, that’s the second-fastest time in United States 17-18 history (which would have been a record at the beginning of the summer, were it not for Santo Condorelli’s 22.32 a few weeks ago). Dressel has also been a hair faster already in 2013, but it was while he was still a 15-16.

In 4th place is American Paul Powers in 22.57, followed by Ukraine’s Bogdan Plavin, Poland’s Jan Holub, Suriname’s Renzo Tjon-A-Joe, and a tie for 8th between Brazil’s Guilherme Ocammpo and Canada’s Yuri Kisil in 22.81. They will require a swim-off to determine the finalist.

In what could be termed a mild upset, American Kylie Stewart of the Dynamo Swim club won the girls’ 200 backstroke in 2:09.74, which is a new Championship Record. That broke the 2:10.43 that Ukrainian Daryna Zevina swam to win at the 2011 edition of this meet. The silver went to her countrymate Kathleen Baker in 2:10.68, and bronze belonged to Russia’s Daria Ustinova, the youngest of the three medalists.

None of those three were able to swim best times here in Dubai, but Stewart and Baker were much closer to theirs than Ustinova was to hers, which made the divverence. Specifically, Stewart was consistently fast across her 50’s, and pushed the first 150 meters without giving up anything on the last 50 (she had the fastest closing split).

For the first time at this meet, there was a tie for a medal position in the boys’ 100 fly. The two Americans, Justin Lynch and Matthew Josa, touched in identicaly 53.27’s in the final, but that was only good enough for bronze. The two took very different routes to get to those bronze medals: Lynch, more of a 200 butterflier, came home hard, while Josa, more of a sprinter in general, went out very hard.

The win went to Japan’s Takaya Yasue in 53.01. He’s just 17 years old, and as Japan is looking toward the next generation of their medley relay, and are badly in need of filling their butterfly hole for the future (though even at 28, Takuro Fujii is still swimming very well in that role).

Brazil’s Pedro Vieira won his country’s first medal of the meet with a silver in 53.17.

After the American tie for bronze, Russia’s Alexander Kudashev was slotted in 5th in 53.56.

In the second of two swims in this final, World Record holder Ruta Meilutyte didn’t show any more than she did in the prelims, coasting to just a 1:08.49 for the 3rd seed in the semi-finals of the girls’ 100 breaststroke. We would find out later in the session just how smart she played that race, even though ultimately there was only a second between her and missing the final.

Overall, though, there is a ton of youth going into this girls’ 100 breaststroke final. Ukraine’s Viktoriya Solnceva took the top weed in 1:07.76 at just 15 years old, followed by Britain’s Sophie Taylor in 1:07.76.

Taking 9th, and missing out on the final, was Italy’s Arianna Castiglioni in 1:09.47.

The Americans, who did not select specific swimmers for 50 meter stroke races, continue to struggle in these sprints. In three events so far that are 50 meters long and not freestyle, the Americans have not had a single finalist, let alone medalist.

The latest came in the boys’ 50 backstroke, where Brazil’s Gustavo Louzada took the top seed in 25.87.

Australia’s Ryan Hore qualified 4th in 26.04, and Greece’s Michael Kontizas finished 5th in 26.08. It was Kontizas, not his countrymate Apostolos Chritou, winner of the 100 back earlier in the meet (finishing 9th here), that made the final.

Grigory Tarasecivh from Russian took 6th in 26.10, followed by Trinidad & Tobago’s Dylan Carter in 26.14. There may not be any Americans in this final, but those two both train in the United States.

Back into finals events, there were a ton of great stories coming out of this women’s 100 free final.

The title went to Hong Kong’s Siobhan Haughey in 54.47, which broke the Meet Record set by American Lia Neal in 2011 at 54.90. That also re-broke the Hong Kong National Age Group Record for 15-17’s that she set in prelims, and came within a tenth of former NCAA standout Hannah Wilson’s overall National Record.

Also closing in on the old Meet Record, though, was Lithuania’s Ruta Meilutyte, who was swimming her third race in under an hour. She put up a 54.94 to again break her own Lithuanian National Record (for any age), at only 16. She played this session perfectly, exerting just as much energy as she needed to make finals in her first two events, and then place as high as she could in this 100 free final.

Australia’s Shayna Jack had her best swim of the meet so far with a 55.23 for 3rd, followed by American Cierra Runge in 55.31. Mariia Baklakova from Russia was 5th in 55.48, and her teammate Rozaliya Nasretdinova (also on a double) came in 8th in 56.27 despite a very good swim in Tuesday’s semifinals.

Australia’s Mack Horton has established himself as the swimmer of these championships, and in the boys’ 800 free on Wednesday, put up what is undoubtedly the swim of the meet so far.

So far in this meet, Horton has improved his best times by:

As it is, though, Horton is now the fastest Australian in 2013 by two seconds, and ranks 5th in the world.

Medals were handed out, but everyone else in this final was largely an also-ran. The Czech Republic’s Jan Micka took silver in 7:56.33, and Poland’s Pawel Furtektook bronze in 7:58.33.

While every country in the final of the mixed 400 free relay led off with a boy, the Americans deviated from their competitors fairly drastically for the rest of this 400 free relay.

Four of the top five teams tried leading off their boys, leaving their girls for the last two legs, likely to avoid having them caught up in the wake of being stuck in a big hole against male swimmers.

The Australians did this, putting Luke Percy 1st in 49.57, Regan Leong 2nd in 49.59, Shayna Jack in 54.37, and Georgia Miller anchoring in 55.21, and the strategy worked masterfully for them. All four swimmers put up times about where expected, their girls swam especially well, and they won in a new (de facto) Championship Record of 3:28.74.

The Americans’ deviation didn’t work out quite as well though. They led off with Paul Powers, who was solid in 50.03, but went 2nd with Cierra Runge, who was only 55.56. That was slower than what she had flat-started just a few races before hand, as compared to the 3rd leg Mary Schneider, who suddenly had 6 seconds of clean water, that split a very good 55.04 on the 3rd leg.

Caeleb Dressel for the 2nd-straight day was left to make up a huge gap, and despite another very good swim, he couldn’t make up the gap, anchoring in 48.83. The Americans totaled 3:29.56 for silver.

Looking forward to see how Ruta can handle the triple today!

Takaya Yasue just came out of nowhere.
What happened to Matthew Josa?

He was third seed with 52.96… the americans underperformed.