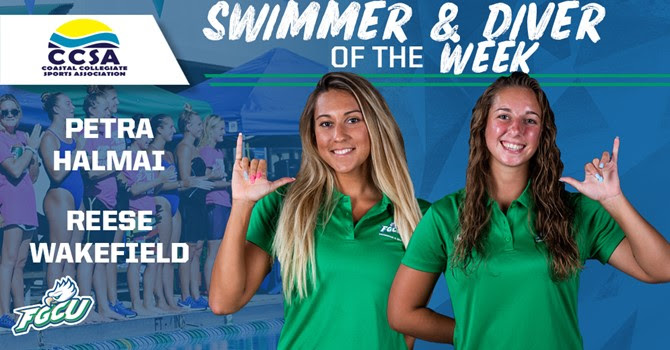 “Congratulations to both Reese and Petra,” head coach Dave Rollins said. “We are off to a great start as a team and to have our athletes recognized by the conference is a fantastic honor. Reese qualifying for zones in only her second meet as an Eagle is tremendous and for Petra to have posted some of the fastest times in the country this early in the season is simply ridiculous. Congratulations to both, this is a very well-deserved honor.”

Both Halmai and Wakefield contributed crucial points for FGCU, as the team downed Vanderbilt Friday night at the FGCU Aquatics Complex by a score of 172-121. The victory marked the team’s first over an SEC opponent in a dual meet and extended the team’s start to the season to a 5-0 run, the best since 2015-16.

Halmai laid down some of the fastest times in the country in the meet against the Commodores, during which she earned three individual first-place finishes and combined for a triumph in the 200-yard medley relay. Her time in the 200 Breast (2:11.36) was just 0.15 seconds off her personal best – which stands as both the CCSA/FGCU record – and ranks fifth in the nation. She swam a 1:01.18 in the 100 Breast, good for 12th in the country.

Immediately after swimming the 100-yard breaststroke, Halmai competed in the 200 Fly and earned yet another top finish for the Green and Blue. At the conclusion of the meet, she swam an exhibition in the 400 IM and dominated the field, posting the top time in the CCSA by a full five seconds.

In just her second meet as an Eagle, Wakefield swept both the 1m and 3m boards. This marks the second time she has achieved such a feat this season, as she took home both titles in her debut during the meet against Georgia Southern/Campbell (Oct. 5). She posted an NCAA Zone score in the 1m dive, tallying up 270.86 points. On the 3m board, she outscored opponents by over 24 points.

Though Wakefield is just two meets into her collegiate career, she has already matched the FGCU freshman record by earning two CCSA Diver of the Week selections. Current junior Megan Wakefield and former Eagle Melissa Novak each received the honor twice during their rookie campaigns.

Fans will have the chance to see Wakefield, Halmai and the rest of Rollins’ squad take on the Houston Cougars (3-0, 2-0 American) in a two-day meet this weekend at the FGCU Aquatics Complex. The teams will face off at 4 p.m. on Friday, Nov. 1 and return to the Nest the following day for an 11:30 a.m. start. On Friday, fans in attendance will have the chance to compete in a Halloween costume contest.