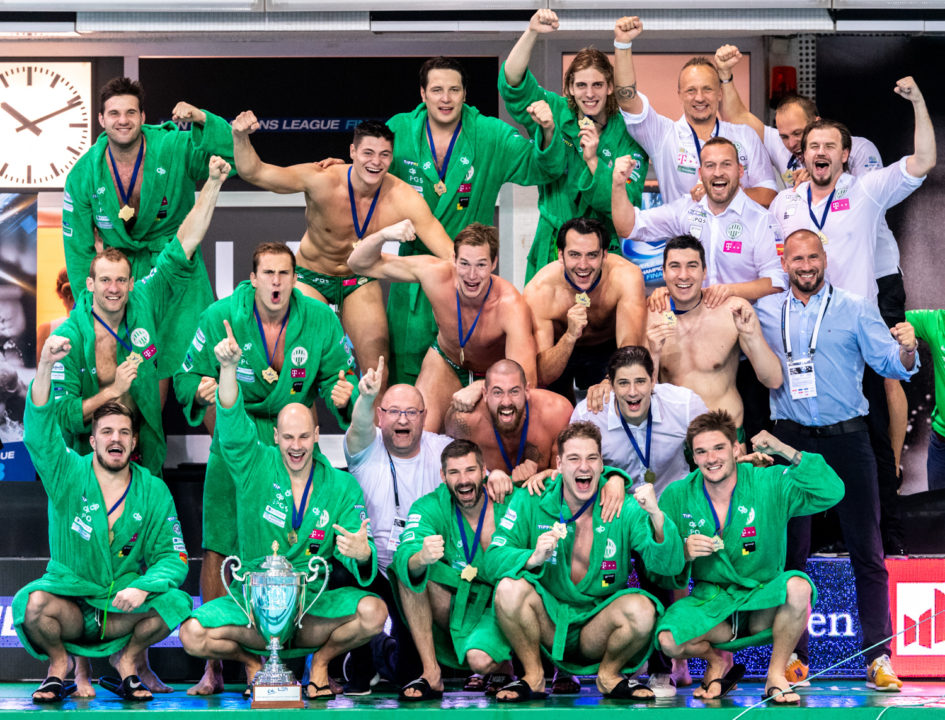 Ferencvaros started its quest in qualification, arrived to the Final Eight from the fourth place in the group and ended up with the Champions League trophy. Current photo via Giorgio Scala/Deepbluemedia

The draw for the second round of the qualifications will halve the field as only the top two of each group can go through.

Ferencvaros made the unthinkable: starting its quest in the qualification and arriving to the Final Eight from the fourth place in the group they ended up with the Champions League trophy in their hands. The Hungarians won a thrilling final against title-holder Olympiacos which made a great comeback in the fourth period but lost the shootout (just like in the Super Cup final in December). Recco got the bronze as they turned the match against Barceloneta.

Ferencvaros could earn a single point against the top three teams in the group stage – now in Hannover they brought down 2016 champion Jug Dubrovnik in the quarters, beat 2014 winner Barceloneta in the semis and finally edged out title-holder Olympiacos in a magnificent final. Quite a feat from a team which was a newcomer in the finals.

The Hungarians kicked off the match in style, as they netted three action goals, especially Denes Varga’s magic worked again which gave FTC a 1-3 lead after eight minutes. And they rolled on, after 2-3 another double arrived in a span of 48 seconds for 2-5. And that was just the start of the flood, Olympiacos hit two soon but the Serbs in Ferencvaros were on fire, Stefan Mitrovic and Slobodan Nikic both buried the extras and 5 seconds before the middle break Marton Vamos blasted his second, so the greens led 5-8 by halftime while Olympiacos’s goalie Josip Pavic stood with a 1/9 saving stat (the Greeks conceded 7 goals in the 2018 final from Recco…).

Still, there were two more periods to go and when Pavic delivered his second save, it was a penalty stop at 6-8, seconds later Konstantinos Mourikis’ brilliant center-action seemed to put his team back on track as it stood 7-8 instead of 6-9. Ferencvaros responded well, however, Mitrovic netted his third and even though the Magyars lost their top weapon Denes Varga with three fouls, Soma Vogel also delivered some saves in man-downs and Aaron Younger reset the three-goal gap for 7-10. Szilard Jansik could even have made it four at the end of the third from a clear chance but his lob was terrible.

And in the fourth the game started to get similar to Ferencvaros’s quarter-final against Jug where they entered the last period with a four-goal lead but almost blew the substantial lead. The season’s top scorer Konstantinos Genidounias came up with a great action shot from the first possession which was followed by five minutes of hell for those swimming up and down. Twelfth period on the third day for all, players burnt their very last reserves – both sides had two man-ups but missed them. Pavic ‘came back’ to the game with great saves, and with 2:12 to go Ioannis Fountoulis finally netted a great one-timer for 9-10. And 48 seconds later it was even, Genidounias netted his 5th goal in the evening from an easy man-up (they were 4 on 2 at the end of the counter) so Olympiacos equalized 96 seconds from time. Ferencvaros seemed to be a bit lost as the Piraeus fans created an electrifying atmosphere but Vogel did another save and with 28 seconds from time the Magyars had a man-up to win the match. But Pavic managed to get a hand on Kallay’s shot in the dying seconds so the trophy was decided in a penalty shootout.

This scenario was well-known for the sides as their Super Cup final in December went down to the 5m line as well. (Ferencvaros also won a shootout to reclaim its domestic title one month ago.)

The duel started as the game finished: Pavic caught Jansik’s attempt while Stylianos Argyropoulos sent the ball home. Tamas Sedlmayer’s shot went in from Pavic’s hand, then Alexandros Gounas hit the post, just like Emmanuel Mylonakis’s shot, between the two Younger scored. But Mark Kallay, who finished off the shootout in December, also found the post and Georgios Dervisis made his one so it stood 2-2 after four rounds. Nikola Jaksic’s blast didn’t leave any chance for Pavic, nor Genidounias for Vogel, so came the sudden death. And it came soon: Jansik was on target this time while the nerves took over as Argyropoulos’s ball almost crashed the woodwork and the Ferencvaros players stormed the water to celebrate their triumph – starting the season in the qualification and arriving to the Final Eight as a group’s 4th ranked team, this was something of an unreality beforehand.

Too bad for Olympiacos: after their women’s team lost the Euro League final in Sabadell, now the men’s also got silver. At the other end Ferencvaros celebrated not only a historical first but they also joined a unique circle of clubs which managed to win all European trophies (Champions League, Cup Winners Cup, Euro Cup, Super Cup) – they are the 4th on board after Pescara, Partizan Belgrade and Posillipo Napoli.

Recco halted Barceloneta’s bronze medal match run: the Spaniards won 3/3 since 2013 and at 3-6 they seemed to be on their way for another podium finish. Alberto Munarriz was brilliant, netted five in the first half but Recco wasn’t done. In fact, they climbed back till the middle break to 5-6 and equalized in the third. Alvaro Granados put away nicely a man-up before the end of the third for 6-7 but that was the last goal for the Spaniards.

Something similar happened to them as in the semis, after dominating for three periods they ran out of ideas in front, missed the man-ups in succession, courtesy of Marko Bijac who ‘arrived’ to Hannover for the second half of this match and delivered one tremendous save after the other. At the other end, Recco levelled the score once more and with 2:47 to Gonzalo Echenique blasted one from a 6 on 5. Barceloneta had one more man-up at the end but Bijac posted another save – the Spaniards could score one goal in the entire second half – so Recco clinched the bronze.

In the games for the lower ranks Jug’s players seemed a bit more motivated against Brescia though neither them, nor the Italians could really focus in defense. It was a fine 25-goal game, the Croats were mostly in controlled their charge with 5 goals, he finished the F8 with 13 to become the top scorer of the tournament.

Host Waspo faced a third Italian test in as many days. For one and a half periods it was a balanced encounter but then BPM netted four goals in 94 seconds (!) to take a 3-6 lead by halftime. The hosts tried to climb back but could never get really close. Despite that, at the last time-out the fans gave a standing ovation to team captain Predrag Jokic as the veteran Montenegrin called it a day after spending his last five seasons in Hannover.

Comments from the coaches

“At these moments all I could say that I’m so grateful to my players and our fans to have such an end to this season. They never stopped believing, even at the toughest moments and I’m so proud of them. Yes, we had ups and downs in the previous months, didn’t play that well in the Champions League but the plan always was to try to be in the best shape at the end and try to go as far as possible. Maybe few thought we could achieve this, newcomers don’t usually go all the way here, but we played as a team and that gave us the necessary edge.”

“First of all, congratulations to Ferencvaros, they are a great team and they did a good job today and if we had to lose this final, better to happen this way. We also tried to do our part, we had to come back from three goals but I felt the power in my team and they proved again their quality. Let me also thank the support of our fans, everyone could see how fantastic they are. Whatever the result was, for me, my players are the best in the world as they played another final, beat great rivals and lost only by penalties.”

“It’s important to finish the season in the right way. After the loss in the semi-final it was really hard to motivate the players, we worked on this but at the end they reacted well. We feel sorry that we didn’t win the trophy but this bronze is also a fine result and we need to see how to improve for next year.”

“We started the game well but in the second half we did the same as in the semi-final. We couldn’t finish our man-ups, we committed mistakes. It’s great to be among the top four teams in Europe but I feel sorry for my team now.”

“It wasn’t easy to find the right motivation after the first day and to play two more matches but the team performed well and I think the club can be proud of these players. We are working hard to further improve our young athletes and will try to build in more youngsters in the next season. This is our way, we have a good academy, and we are still believing to be able to win the Champions League with this approach.”

“We didn’t play well, we made too many mistakes both in attack and defense, so it wasn’t a good game, we lacked the right motivation. At the same time, I want to congratulate Jug, for me they are the best club in Europe as they build on their local young players.”

“First of all, compliments for Hannover for the fine organization, it was a great tournament in a great venue. The match today was tough, especially during the first two periods but then we swam faster, better and that decided the match.”

“It was a great way to say farewell for our captain Predrag Jokic who spent five years with us, won titles and gave this team so much. We played the third game in three days, and this was demanding. Same for Sport Management, of course, and they were a bit better today. We could have more perhaps, but I cannot blame the players that they could not fully concentrate in certain moments. It was tough three days but I think we gave our best.”