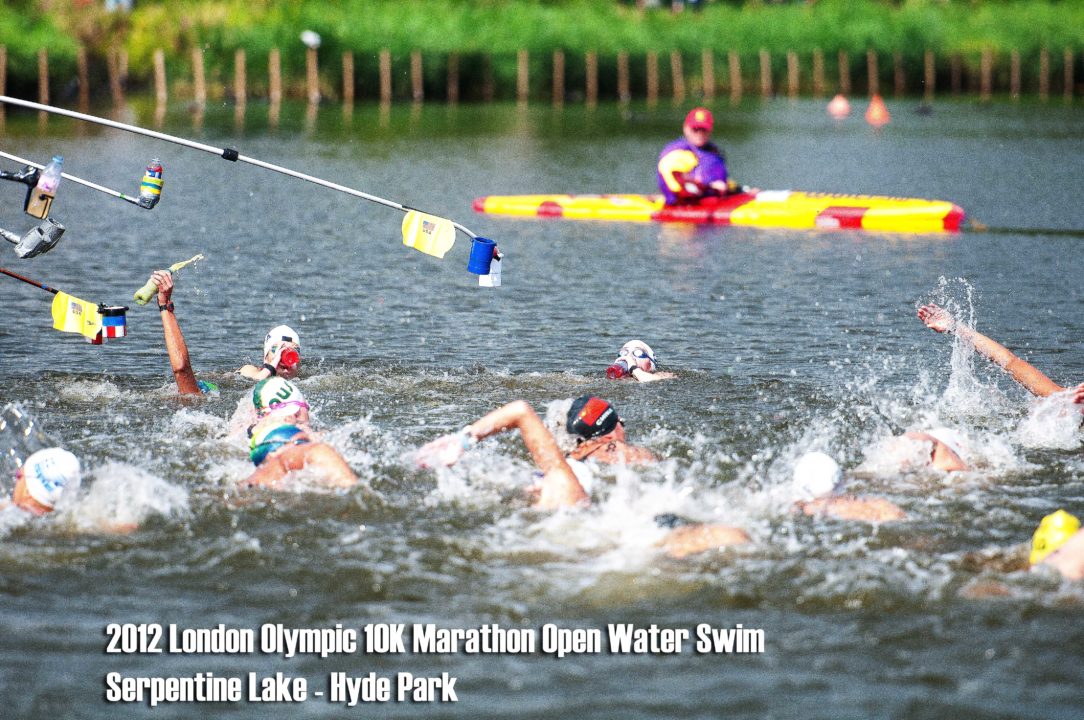 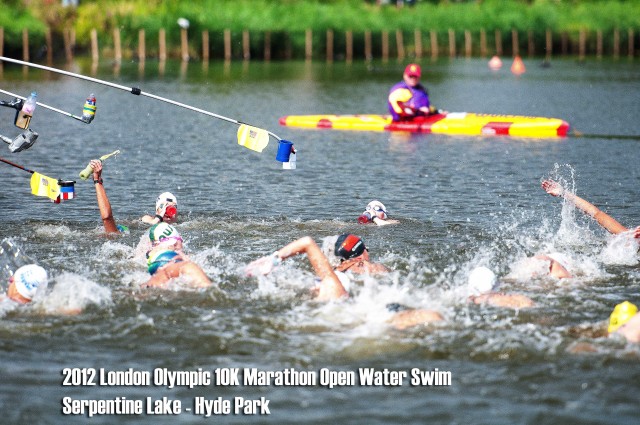 It was a beautiful day with nearly perfect conditions for the women’s 10K open water marathon swim on the Serpentine Lake in London’s Hyde Park.   From the first gun the pack came out strong but not as strong as expected.   The first 4 laps were a bit tame and the field remained a rather large pack for the first two thirds of the race.   Team USA’s Haley Anderson swam a strong second lap and took the lead a bit early in the race.   Soon she settled back in the 3, 4 position and looked solid and smart.  Keri Anne Payne was a bit of surprise and wasn’t charging much after the first lap. Hungary’s Eva Risztov took the lead for the majority of the final two laps and really swam a lone.   But the true excitement in this race – as is typical – was the final 400m.   Eva Risztov took had a solid lead and Haley Anderson started charging hard.   It became a true nail bitter all the way to the point of the over head touchpad with Risztov just touching out Anderson for the gold by 4 tenths of a second.  Martina Grimaldi of Italy won the bronze.     Both Risztov and Anderson qualified for this event at the “second chance” event in Portugal in June.   Team GB’s Keri-Anne Payne was 4th.  Here’s the complete results.

Congratulations to Haley! I watched the race, and her finish was nothing short of spectacular! I can’t believe after that LONG race she was beaten by 0.4! Now USA swimming has matched the medal count from Beijing! We’ll see if Alex is inspired enough by this race to win one more for the team. Go USA!

This sounds exciting! I hope that they show it on the primetime show this evening!

The conditions are so good weather and water temp wise, no currents or surf. It’s basically like a long pool swim without turns. Anyone want to bet against Mellouli tomorrow? Ladbrokes will take the other side if that bet all day long.

A great race. Risztov was pretty brave to lead from so far out, but it paid off. Nice swim from Anderson. Favorite part of the race was the shot from the overhead camera of Haley Anderson diving underwater to move to the outside to keep from getting boxed in. Loved all the overhead shots. Cool perspective.

Men’s race tomorrow should be great as well. Looking forward to it!