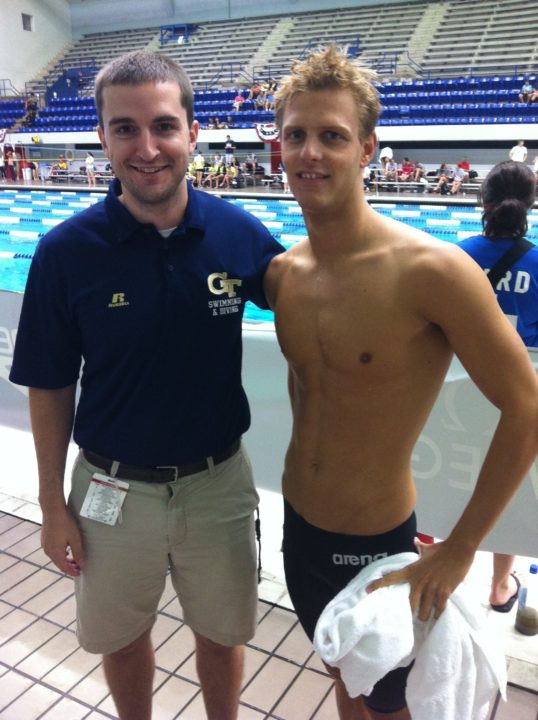 Sometimes, when recapping prelims sessions, it’s hard to know where to look to come up with something notable.

Other times, however, the athletes make it easy. On Thursday in Indy at the 2012 U.S. Open Championships, Switzerland’s Nico van Duijn broke the Swiss National Record in the men’s 100 fly with a 53.22. That took down the mark set by USC-trained Dominik Meichtryat the Olympics in 53.40.

Van Duijn will be a sophomore at Georgia Tech next season, where the Yellow Jackets haven’t had an NCAA finalist since the great Gal Nevo in 2010. If van Duijn carries his long course swims over to yards, that could change next season.

He will take the third seed into finals behind a 52.98 from Australian Kenneth To, which is his best time since 2009, and Minnesota’s Kyler van Swol (53.03).

In other races on Thursday morning, USC’s Meghan Hawthorne took the top seed in 4:43.81, followed by Texas A&M’s Sarah Henry in 4:44.80. Both have been much faster than that. Indiana All-American Allysa Vavra took 3rd in 4:46.24, with Becca Mann 4th in 4:46.52. Mann could be a contender in finals as she takes this race out much harder on the butterfly leg than everyone else.

Other big names in the A-final include Adam Hinshaw from Cal, Michigan’s Kyle Whitaker, and Wisconsin’s Michael Weiss, who were all off of their bests through the heats.

T2’s Erika Erndl continued to look great in the 100 fly, breaking a minute for the 8th time in the last year with a 59.48 for the top seed. She hadn’t been under 60 seconds in the prior 30 years of her career.

Auburn school record holder Olivia Scott was under a minute as well with a 59.95, followed closely by Kelsey Floyd, winner of the 200. in 59.97. After Floyd swam a lifetime best in that 200, she should be much faster than this 59.9 in finals.