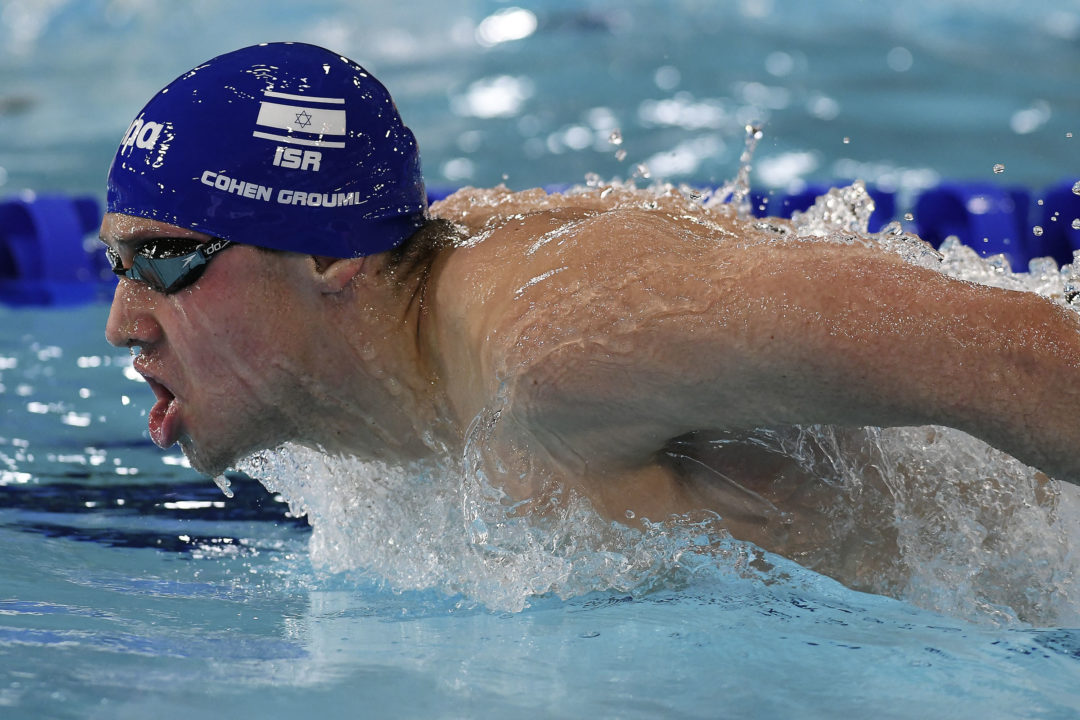 Gal Cohen Groumi, who was the fastest leg on Israel's Olympic-qualifying 800 free relay, has committed to the University of Michigan. Archive photo via Israel Swimming Association

Cohen Groumi was a member of Israel’s team at the 2019 European Junior Swimming Championships where he earned a bronze medal individually in the 200 IM (2:00.48) and also placed 6th in the 100 fly (53.26). He likewise swam on all 3 Israeli relays at that meet, each of which qualified for finals but none of which medaled.

A year earlier, in 2018, he was on the gold medal winning European Junior Championships men’s 400 free relay.

What’s more, he swam a leg of Israel’s prelims 800 free relay at the 2019 World Championships. He split 1:47.53 on the anchor, which was the fastest leg of the whole relay. Thanks to their 10th-place finish in prelims, that relay has secured a spot to swim at the Tokyo Olympic Games next summer.

Cohen Groumi will have an immediate points impact for the defending Big Ten Champion Michigan men. While ‘weakness’ is a relative term, the biggest holes in Michigan’s lineup last season were in the butterfly and backstroke events. Cohen Groumi should be able to immediately help fill the gap left by graduating senior Miles Smachlo, who won the Big Ten title in the 100 fly and placed 2nd in the 200 fly last season.

He’ll also have a chance to jump immediately on to Michigan’s 400 and 800 free relays, depending on how he progresses over the next 18 months.

Swimmers in this mold, butterfliers/freestylers, have been the recruiting focus of Michigan across the classes of 2020, 2021, and 2022, as many of their commitments across those classes have fallen into that skillset. Among those scheduled to arrive in the fall of 2021, that includes Parker Nolan. Also in a small class of 2021 for the Michigan men are breaststroker/IMer Cameron Luarde, distance freestyler Connor Hunt, and backstroker Jacque Wenger.

Cohen Groumi will join a legacy of Israeli swimmers who have gone on to train at the University of Michigan. Chief among them is Alon Mandel, a 2008 Olympian who won 7 CSCAA All-America honors and 5 Big Ten event titles while training with the Wolverines.

Current Michigan sophomore Nadav Aaronson is also from Israel, only a few miles from Cohen Groumi.

Cohen Groumi’s uncle is Eran Groumi, who is a former Israel National Record holder and swam at the 1992 Olympic Games in Barcelona.

Huge get for Michigan!! He is a real talent.
Israel has a great generation of young swimmers (both male and female) who can really make an impact at the international stage. Frankel, the Polonsky siblings, Barzelay, Groumi and Gorbenko (all born 2000 or later) can really put Israel up there at the next 2 Olympic Games.

Congratulations, huge get for Michigan!