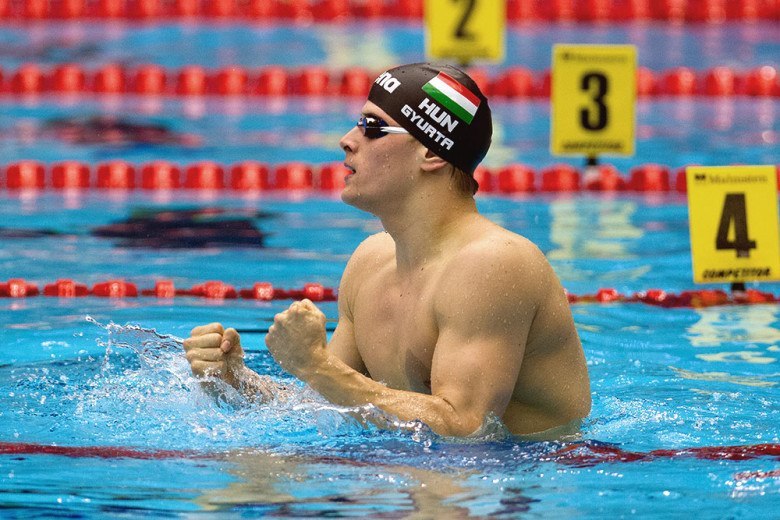 British teenager Adam Peaty swam at his first major international competition at the Commonwealth Games and showed that his inexperience was not a hinderance to his success. The 19 year old walked away from Glasgow with a gold in the 100 breaststroke and a silver in the 50 breaststroke, posting a new European record time of 26.78. His improvement over the last year has been more than impressive, he entered the year with a lifetime best of 27.58.

Caba Siladji of Serbia comes into the competition with the second ranked time in Europe having posted a 27.09, which is also a lifetime best. He has made great strides over the last year having a season’s best of 27.80 in 2013, which was his textile best.

Siladji has experience having competed internationally for Serbia at the 2008 and 2012 Olympics. He also qualified for the semi-final in the 50 at the 2011 World Championships.

Italian Andrea Toniato had his first taste of success on the international stage last summer when he took the silver in the 50 breaststroke at the Universiade in Kazan. Toniato will be hoping to do what his Italian teammates Fabio Scozzoli and Mattia Pesce have done in the past, come home from Berlin with a piece of hardware around his neck.

Ross Murdoch of Great Britain comes in with the next fastest time of 27.28. The 20 year old will most likely have more success in the longer races, but still has the speed that will make him a threat in the 50. Murdoch finished sixth in the event at the Commonwealth Games and set the Scottish Record earlier this season.

Mattia Pesce of Italy will be heading into the competition with the sixth ranked time of 27.38. In 2011 Pesce took the bronze in this event at the Universiade, in 2012 he also won the bronze in the 100 breaststroke at the European Championships. He posted his lifetime best of 27.32 last year.

Slovenian Damir Dugonjic is the reigning European champion in the event and is going into the championships with a season’s best of 27.54. Dugonjic set the European record swimming a 26.83 in the semi-final at the world championships last summer. He eventually finished fourth in the event.

Ross Murdoch collected the bronze in the 100 breaststroke in Glasgow and will also riding a strong wave of confidence. Earlier in the year Murdoch set Scottish records in both the 50 and 100 breaststroke, two records he broke once again at the Commonwealth Games. Murdoch like Peaty does not have a lot of experience on the international stage, but has shown just as Peaty has, that he is ready to be among the world’s best.

Lithuanian Giedrius Titenis is one of the most experienced athletes in the field having made the finals at the 2009 and 2011 World Championships as well as the 2012 Olympics. Titenis has a lifetime best of 59.24 which he swam in 2009 and a textile best of 59.66 which he posted in 2012.

Hendrik Feldwehr comes into Berlin with a season and textile best of 59.81. Feldwehr has a lifetime best of 59.15 which he recorded in 2009.

Feldwehr’s German teammate Marco Koch has the next fastest time coming into the championships having posted a textile best of 1:00.08. Koch has a lifetime best of 59.80 from 2009, but has improved his textile best in 2014 by close to a second.

Hungarian Daniel Gyurta heads into Berlin with a season’s best of 1:00.32 and a lifetime best of 59.53 which he posted in London. For the last four years Gyurta has been an unstoppable force in the 200 breaststroke, but has never had much success in the shorter distance.

The 200 breaststroke may turn out to be one of the most compelling races of the championships, even without the defending Olympic/three-time defending long course World/two-time defending long course Euro champ Daniel Gyurta. After the Commonwealth Games show but on by the Scots, Gyurta’s absence is really upsetting what could have been one of the year’s great parties at any championship meet. Ross Murdoch heads into Berlin with the top time having posted a 2:07.30 to win the Commonwealth gold in Glasgow.

Without Gyurta, it is left to the German Marco Koch to challenge the British dominance in this event.

Marco Koch has posted a season and textile best of 2:08.43, and has a lifetime best of 2:08.33. He finished second to Gyurta at both the 2013 World Championships and the 2012 European Championships, and so prior to what we saw at the Commonwealth Games, he would have been the favorite.

British teammates Adam Peaty and Andrew Willis come into Berlin with the next two fastest times in the field.

Peaty has a season and lifetime best of 2:09.40. The 200 breaststroke was the only event where Peaty was not at his best in Glasgow, but with the way he has been swimming this year it is hard to completely dismiss him. A gold medal threat, most likely not, but if put in the right situation he may challenge for a spot on the medal podium.

That is of course if he can beat out Willis for a spot in the final. With a maximum of two athletes per nation allowed in the final only one of these two swimmers will have a shot at the podium. Willis was able to out swim Peaty at the Commonwealth Games to collect the bronze. He comes into the competition with a season’s best of 2:09.85 and a lifetime best of 2:08.47 which he recorded at the Olympics.

If Willis gets a spot in the final he is not one to be discounted.

Luca Pizzini of Italy and Russian Aleksander Palatov come in with the next two fastest times. Pizzini has posted a 2:10.84 while Palatov has recorded a 2:10.94. Palatov is one of several Russians to have been under 2:11 this year, including the teenager Marat Amaltdinov, who was a 2:09.77 at the Russia Cup. When Amaltdinov swam that time, he was just 34.0 over the last 50 meters, and he has great speed for a young 200 guy. If Amaltdinov can clean up that closing length by Rio, he could contend for an Olympic medal there.

Gyurta is not swimming the 200 in Berlin

Gyurta isn’t swimming the 200, so that makes Murdoch the favourite if he can repeat anything like his Glasgow performance, but Koch at home will be extra motivated. Could be a great race 🙂

Happy to see you back on swimswam! 🙂
Ready for the Danish girls’ show in Berlin?
And Sjöström’s show as well?
It will be a very nordic championship!

You’re right about Gyurta! I had completely forgotten. Probably the result of 2 weeks in a row with nights of 3 hours. 😆
And it looks like Jeff Grace has forgotten too. 😉

Ah, the Danish summer doesn’t last very long, so you have to get out and enjoy it while you can 🙂

I am very excited for Jeanette vs Sarah in Berlin, although if Sarah swims at the level she did in Boras, Jeanette will be in trouble.

Our Danish head coach has set a target of nine medals, which will be a record for Denmark (our best ever so far is 6). What would really please me is for one or two of the men to join in the party, such as Mads or Viktor.

Very impressive breaststroke level at the European championships.
Hopefully the British swimmers still have some gas after CG to bother a little Mr Gyurta.
About French swimmers, if we have one finalist in each breaststroke event, it will be very good. We can’t expect much more than that.