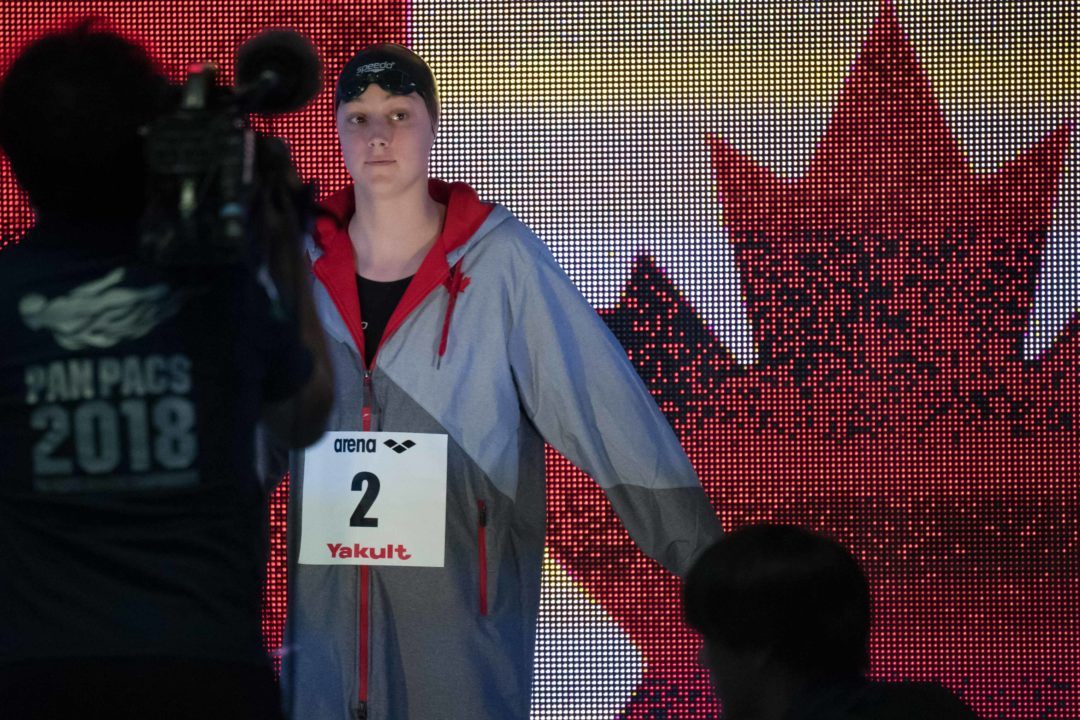 Canada's Emily Overholt burst onto the international scene in 2015, taking bronze in the 400 IM at the FINA World Championships that year. As she set her sights on Rio, however, her mental health quickly deteriorated.  Archive photo via Mike Lewis/Ola Vista Photography

Canada’s Emily Overholt burst onto the international scene in 2015, taking bronze in the 400 IM at the FINA World Championships that year. As she set her sights on Rio, however, her mental health quickly deteriorated.

“Things seemed perfect from the outside,” Overholt said in a recent Swimming Canada feature. “But all this pressure and expectation was affecting my mental health.”

“That’s definitely when I started to feel depressed.”

After Worlds, she moved out on her own and took the year off school to focus exclusively on swimming. The daily pressure to think about making the Games proved to be a “huge weight.”

“I was in bed pretty much all day every single day. I didn’t want to see my friends, I never saw my family, and I just had no energy or motivation to do anything,” Overholt said. “I was going to practice but I was dragging myself there.”

She swam through those feelings and qualified for Rio at Trials in April 2016 with a second-place finish in the 400 IM, but found little enjoyment in her success. After swimming the 200 free, Overholt scratched the rest of the meet and didn’t race again until the Olympics.

“I was just happy to have it out of the way,” she says. “When I saw other people making the Olympic team, their reactions were different than mine. I was kind of confused that I wasn’t really feeling that way. I guess they just seemed a lot more happy than I did.”

While Overholt thought the prospect of the impending Olympic trip would end her depression, it didn’t, and she also suffered a prolonged hamstring injury that often kept her away from the team.

When she finally made it to the 2016 Games, Overholt nabbed the last spot in the 400 IM A-final, taking fifth overall in the end, and swam prelims of Canada’s third-place 800 free relay. But she returned home feeling like a failure nonetheless.

“There was one day where I just felt so alone and like things were never going to get better,” Overholt said. “That my life was just going to be like that forever.”

One night, she ended up in the emergency room – and then was hospitalized for over two months to recover.

“It took a long time before I even started talking to the doctors there. I told them I just wanted to go home and I didn’t want to talk to anyone, but obviously they weren’t going to let me go home if I wasn’t safe,” Overholt said. “I was (eventually) ready to accept the help that I needed and they were ready to help me, so I finally started to talk to them and that’s when things started to turn around. I worked with the doctors to find the right medication to help me and we also found the right combination of therapies to get me feeling like my normal self.”

Once she was released, Overholt spent more time back at her parents’ house, and sat out the 2017 season in the pool. She wasn’t sure if swimming was making her mental health better or worse.

“Coming to the pool every day was a struggle still and I thought that that was what was bringing my mood down,” she said. “But another part of me wanted to swim. I still felt like I had goals I hadn’t reached yet. I knew I needed to take some time away but I didn’t know if I was ready to come back.”

In the fall of 2017, she returned to the pool under the supervision of a psychiatrist and psychologist, and was named U Sports national rookie of the year. She swam herself back onto the Canadian National Team in July 2018.

“I’m so happy,” Overholt said after her 400 IM win at Canadian Trials. “A year ago I didn’t think I was ever going to be back here, so it means a lot.”

Looking back on the experience, she wishes she had taken action sooner.

“I thought that people would say I was being dramatic or that it wasn’t a big deal,” Overholt explained. “I think if I had asked for help sooner, I would have had a very different experience with it all. I waited a very long time before I talked to people about it and before I told them how serious it was. That really just made the problem so much worse.”

Overholt continued to rebound in 2018, making finals at Pan Pacs and more recently helping UBC to the U Sports National Championship with wins and national university records in the 200 free, 400 free, and 400 IM, racking up 10 new best times since December, according to Swimming Canada. And earlier in March, Sport BC gave her the Harry Jerome Comeback Award at its Athlete of the Year Awards.

After going through this experience, Overholt’s mental approach to swimming has shifted.

“I think reaching those goals is going to be done by having fun, so that’s kind of what this comeback has been about, and just enjoying the process every day,” she said. “I think this time around, that I’m doing it more for myself rather than for results. I’m really enjoying swimming. There are definitely days when it’s a struggle of course, and when I first came back it was really, really tough. But it’s different this time around.”

Watch more about Overholt’s story below:

Your parents force you to go to parties?

Amazing good story, thank you SwimSwam. All the best always for Emily as well.