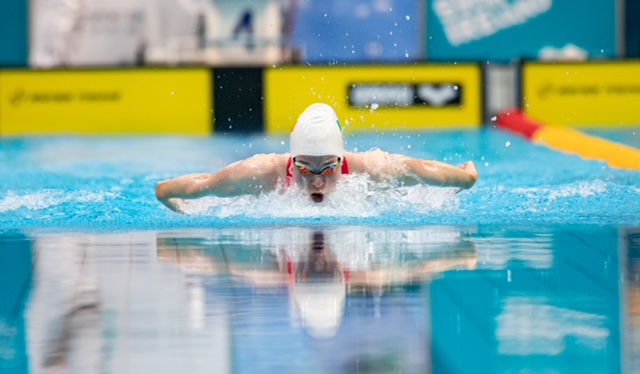 Ellen Walshe, swimming the 100 fly at the Tennessee Invite for the first time in her college career, became the second-fastest freshman ever in the event. Archive photo via David Kiberd/Sportsfile

Ellen Walshe, a freshman at Tennessee, swam the sixth-fastest time in the 100 fly (50.24) for a freshman ever. The top five times belong to Maggie MacNeil, who swims for Michigan and was a freshman in the 2018-19 season.

Walshe narrowly beat Torri Huske, who swam a 50.30 at the NC State Invite and is tied as the third-fastest freshman with Kate Douglass, who also swam a 50.30 as a freshman in 2019. Olivia Bray is the fifth-fastest to have swum the event as a freshman, followed by Louise Hansson.

Walshe competed in the event on Friday at the Tennessee Invite, earning an NCAA A-cut and event win in the process. Her time is currently the 40th best performance in the event among all grades, and she’s the eighth-fastest swimmer in the event, ever.

She’s also the fastest swimmer in the event as of times entering Friday night, her prelims and finals times both defeating UVA junior Douglass’ 51.51 from earlier in the season, as well as Huske’s time from Friday night. And Walshe, just a few months into her time at Tennessee, secured the second-fastest time ever in the program, behind now-graduated Erika Brown’s 49.38 in 2020.

Walshe is part of a recruiting class Swimswam ranked as number two in the country, and is among 16 new swimmers on the Tennessee women’s team.

I think years. There are probably 8 currently in college who could do it, but that they would all in the same race (and would all choose the race for that matter, ala Regan and Kate Douglass at NCAAs), might be the limiting factor.

How old is she?

Turned 20 a couple of months ago.

Turned 20 earlier during this academic year. So age wise, she’s the American equivalent of a sophomore with an early birthday, or a freshman who took a gap year.

I’m surprised you brought up Torri Huske but not Maggie MacNeil, which would’ve been a much safer claim to sell out on.

BOOOOM!!! Huge swim and huge breakout meet for the freshman. Luck of the irish is being very kind to the lady vols.

It is talent, recruiting and the best coaching ever. I believe the lady VOLS will win NCAAS in March. Those poor man VOLS are looking pitiful compared to the girls.

I can’t tell if this is a Tennessee homer or not. Strange post

I don’t know about winning the NCAA’s, but this is pretty strong Tennessee women’s team across the board. A lot of young talent.

That seems way faster than what her raw LCM times might convert to (?). Lets see how she goes, but Ireland might just have a really good one here.

I thought the same thing. Would be curious to see the race. Some top notch underwaters might explain the discrepancy here.

Search uva swimming on YouTube they have most of them

Indeed the case, but also a pure stroke. I think she’s more of a “flyer” than Erika Brown was for example. Expecting a big 200 tomorrow!

Thinking about this, Ireland could have decent female and mixed medleys moving forward, fly was always their big issue. Irish swimming looks capable of 3/4 relay finals at Euros – That’d be big for them.