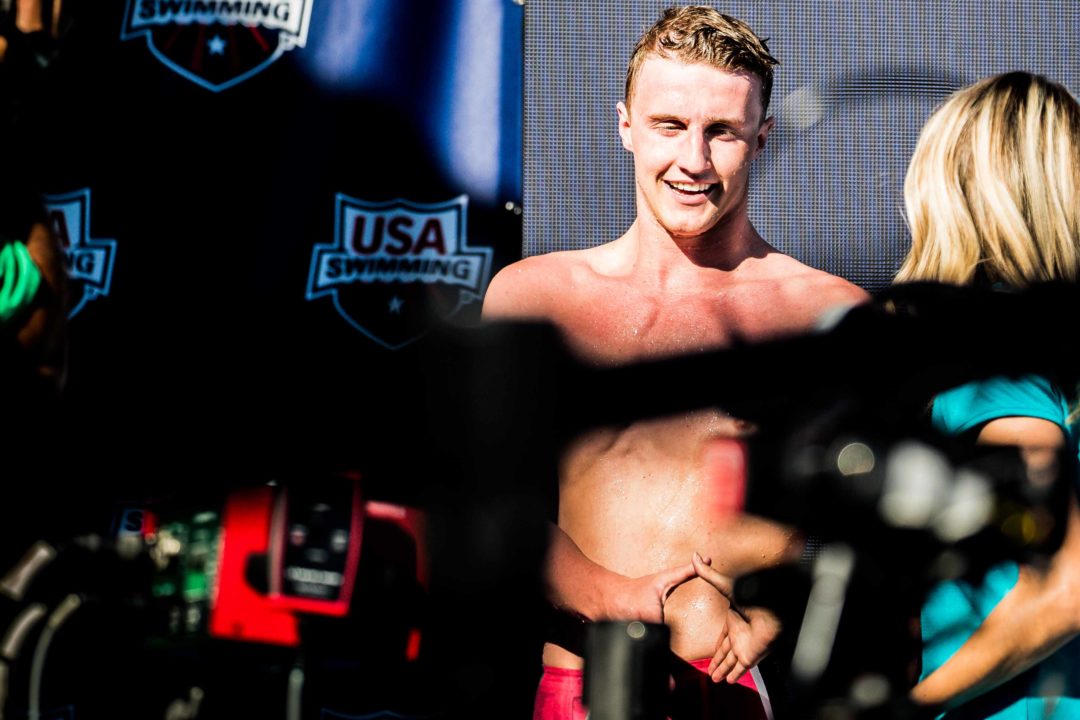 Elijah Winnington leads a resurgence of Australian strength in the 400 free, setting a world-leading time and moving to #9 all-time with his win at Trials. Current photo via Jack Spitser/Spitser Photography

If there’s one thing the Australian men have been known for the better part of the last three decades, it’s middle-distance freestyle, and today Elijah Winnington added his name to a very strong list of Australian stars in the 400 free. Going head-to-head against a strong field that included defending Olympic champion Mack Horton, Winnington, touched first to win with a time of 3:42.65, a time that moves him up to #9 all-time in the event, and makes him the fastest man in the world in 2021.

The Australian men now account for 4 of the fastest 10 men performers ever in the event. The 400 free has been a strength for the Aussies ever since the 1990s. Kieren Perkins set the world record at 3:46.57 at the 1992 Australian Olympic Trials, and then after losing it to Yevgeny Sadovyi at the 1992 Olympics, he took it back with a 3:43.80 at the 1994 World Championships.

In the late 90s, teenagers Ian Thorpe and Grant Hackett burst onto the scene. Thorpe lowered Perkins’ record by nearly two seconds at the 1999 Pan Pacific Championships, then would set it another four times, culminating in a 3:40.08 at the 2002 Commonwealth Games. Those three men would account for 400 free gold medals at four-straight World Championships: 1994 (Perkins), 2001 and 2003 (Thorpe), and 2005 (Hackett), while Thorpe won gold at the 2000 and 2004 Olympics.

Thorpe and Hackett both retired before 2009 (although both have attempted comebacks), and the Australian men wouldn’t win another medal in this event at the Olympics or World Championships until Mack Horton just beat defending champion Sun Yang of China in 2016.

Looking again at the all-time rankings, Winnington’s swim bumped Peter Vanderkaay of the USA out of the top ten. Winnington’s Aussie teammate, Jack McLaughlin, meanwhile, is now 13th all-time, with his time of 3:43.27, and will join Winnington in this event in Tokyo. Horton, meanwhile, finished 3rd with a 3:43.92, and will not make the Olympic roster in this event, a testament to the depth the Australians currently have.

While you can call Winnington’s an upset, considering he beat the defending Olympic champion, it’s certainly didn’t come out of nowhere. He set the Australian 13&U age group record in the 400 free back in 2014, represented Australia at the 2017 World Junior Championships, and set the 400 free (SCM) World Junior record in 2018, among other accolades. He came into Trials with a lifetime best of 3:43.90, which was already under Swimming Australia’s Olympic Qualifying Time of 3:46.34, and he’ll head to Tokyo as a clear contender for gold.

You have to think some of these times will translate down to the 200free.Can’t wait.

I wonder if the depth of competition domestically will push Winnington towards a 3:40 in the next few years. Given there were two teenagers (Neil and Short) swimming PBs, booking tickets to world champs won’t be guaranteed year after year. It’s the same depth as the US had in the men’s 100m backstroke that saw Grevers miss out and drove Murphy to a WR, and the crazy depth Australian has had in the women’s 100m freestyle with Alice Mills (and later Emma McKeon) missing out on Olympic berths despite being 4th fastest all time in 2004

Unless k smith translates his 500

If he can go even 3:44 that would be a massive success, 3:43 would be phenomenal at this stage considering the US has been lacking 400m+ swimmers for a while now. 500 yard performances would translate better to a 200m free, but the 400 is a little harder to predict

I wonder if he wasn’t fully tapered … we might see this WR fall soon.

Nobody is. This meet isn’t important enough.

Mack Horton sure paid for that mistake

The existence of Biederman’s WR annoys me so much
Thorpe’s 3:40:08 is the best WR in my opinion due to how long it remains dominant.

i don’t think u understand how world records work bud

Were all hear to learn, share that knowledge because I agree with SBOMega

You know what’s annoying? Anytime Biedermann’s name pops up on a list someone has to make a comment about his records. Dude was ready to swim and wore a legal suit. He was still one of the best swimmers in the world for a period of time without the suit. He did his thing and honestly gets no credit for a career most of us could only dream of.

Everything you say is completely true: he was a great swimmer. But that still doesn’t negate the fact that Thorpe had the better swim, suit-adjusted. Plus Thorpe was the more consistent swimmer, holding steady between 3:40 and 3:42 from 1999 up to 2004.

The fact that it’s by .01 too is almost just mocking us

Yes, but that 400 free final at Worlds 2009 was a very tactical race from Biedermann who was fourth at 200 m in 1.51.02, behind Cochrane, Mellouli and Zhang. So, clear negative-split for Biedermann but above all incredible last 50 by Biedermann (25.77 !! ) who at 350 m was nearly 1 second and 3 tenths slower than WR’s split. In other words, the 400 WR wasn’t so incredible as it could be, and as the 200 free WR (where, because of Phelps’ presence, Biedermann was fast also in the first half) was.

But also Biedermann (and every swimmer, for instance Britta Steffen) reckoned that his 2009 WRs were “suited”. Anyway, as every swim fan should remember, Biedermann already swimming with the textile Arena Revolution, at the Mare Nostrum meets, improved a lot his 200 free PB in that 2009 that was, anyway, a great season for him. Obviously, Arena X-Glide was a sort of “lethal weapon” for him and many others, because around 99% of swimmers at Worlds 09 abandoned the 2008 Speedo Lzr and the Tyr 50% poly, to swim with the 2009 100% poly suits. The advantage of these suits of last generation was so great that all the Aussie swimmers, northeless Speedo was a main sponsor of their federation,… Read more »

especially that 1:42…. such an outlier performance

I mean if we’re discounting world records because we don’t like the suit they were done in, Phelps’ 1:42.96 is only maginally more legit… but still aided by an insanely advanced suit. Biedermann gets a lot of flack for choosing to wear a superior suit, but at the end of the day he was playing by the rules.

I’m glad they changed the rules, but Biedermann was a legit swimmer and it’s ridiculous that we act like Phelps was so noble for sticking with the LZR. He led the rubber suit charge and then when someone else took that to its natural next step and beat him at his own game, he and Bob Bowman got all indignant and threatened… Read more »

Yeah this is a super underrated point, Most of the suits from 2000 to 2009, whether they be full body suits to polyurethane, are not “textile” by today’s standards. The textile world record holders of the 200 and 400 free are technically neither phelps nor thorpe. For better or worse, they’re Agnel and Yang.

And it’s also meaningless the mere distinction about textile and not textile suits. The textile suits of the last 2/3 years are so more performing than those of 2007, for instance. I don’t know if they’re distant from the Lzr 2008 (the 2009 100% poly suits were clearly better). Anyway, useless discussion, because every WR swum with a legit suit is.. legit.

What a load of Rubbish.

Nope. I wore the full body LZR and the blue seventy neoprene suits weeks apart and it made a world of a difference to wear a full-rubber suit. 50-75% of the full body LZR was made of the same material today’s suits are made of. The Arena X glide was made up of 0% of today’s material, and was 100% water proof and super bouyant from head to toe.

For this event particularly, absolutely. While Mellouli was a great swimmer, he was almost always 3:44-3:46 otherwise, more of a mile and 10K specialist. Zheng Lin literally has never been within the galaxy of his neoprene times before or since, and Biedermann is self explanatory. For this I petition Winnington to have an asterisk next to his rank