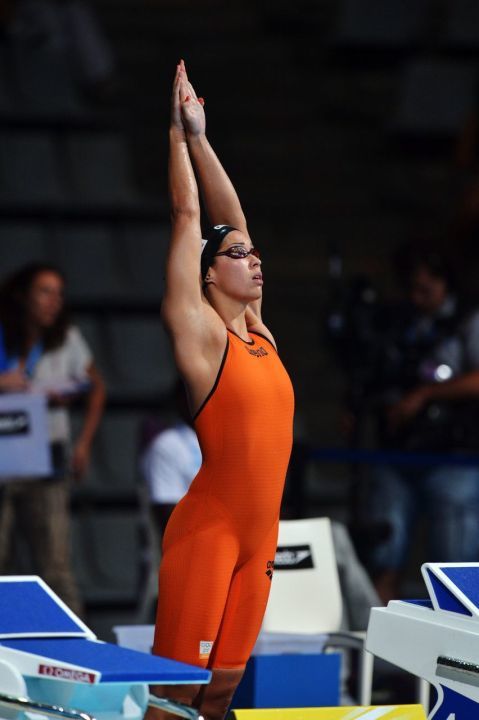 In one of those most impressive morning swims all week, the Dutch foursome of Esmee Vermeulen, Ranomi Kromowidjojo, Maud van der Meer, and Inge Dekker absolutely annihilated the field and the old world record in the 4×50 freestyle relay. The previous record had been established by Denmark at last year’s European Championships, but the Dutch blew right through that record with that effort today.

Comparative splits of the old and new records:

Almost immediately, the first thing that jumps out is that the Dutch accomplished this record with a relatively weak lead-off leg. Only two of the other seven leadoff swimmers for teams that qualified for finals had a slower leg than Vermeulen. This only increases the impressiveness of the record, as the Dutch will be able to use sprint powerhouse Femke Heemskerk tonight to lower that record even further.

Also of note is the fact that the Dutch were the only team to have a sub 24 split by any of its members this morning, and they three different ladies do that in this swim. Talk about impressive depth, and it’s pretty obvious these ladies want to leave these Championships with an absolute bang.

You say ‘impressive’, i say ‘decent’ 🙂
Tonight it will probably be Femke instead of Esmee, put some finals-fire in those girl and don’t be surprised if you see at least 2 sub-23 swims and a time below 1.33!

Is there a live broadcast of these races?