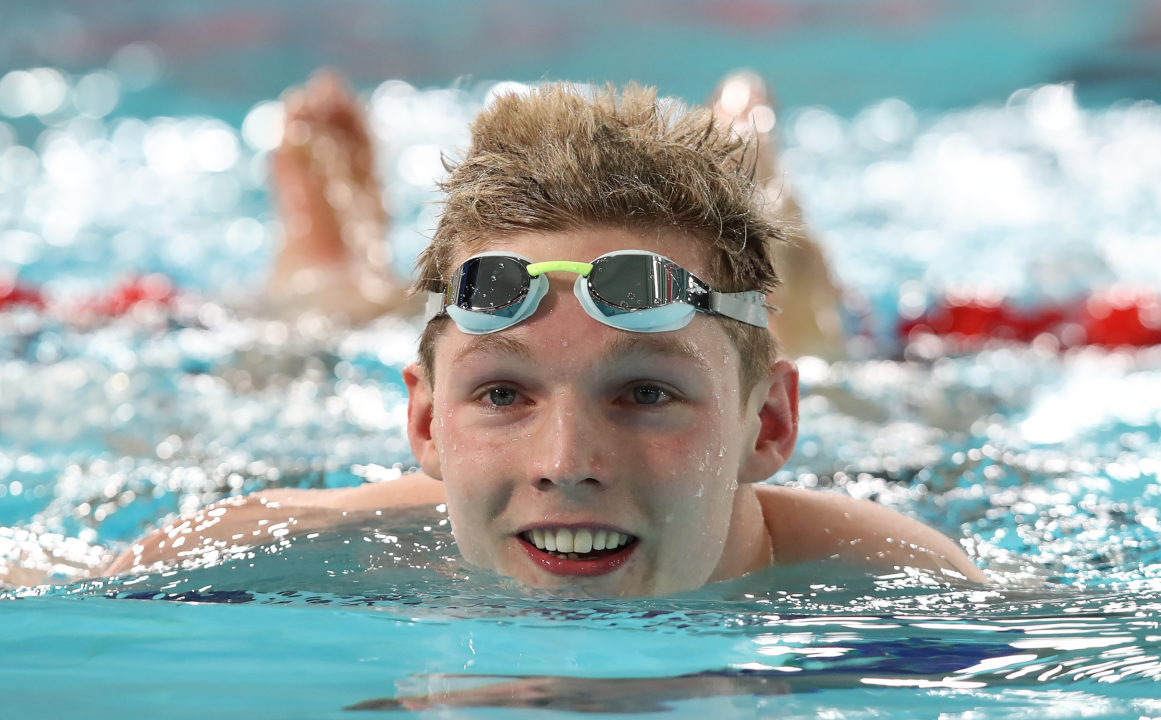 The battle is brewing in Sheffield, with individual events giving teams a chance to separate themselves at these BUCS Long Course Championships. Archive photo via Ian MacNicol for Scottish Swimming

Day 2 prelims of the British Universities & Colleges Sport Championships (BUCS) long course swim meet heightened the battle among the top tier teams, with the likes of past overall winner Loughborough University staking its claim on another championship trophy.

But, armed with team members to the tune of Olympic medalist Duncan Scott, two-time Olympian Craig Benson and more, the University of Stirling is once again ready to make another charge at the BUCS long course title this year.

As a reminder, full live stream of the 2020 meet will be available via the SwimSwam Facebook page. For the first time, we will be expanding our coverage to live recaps of all 3 finals sessions of the meet, which will include an embedded live stream.

The aforementioned Scott was in the water this morning, with the versatile 22-year-old taking gold in the men’s 400m IM. One of just a few events in which the winners are declared in the morning, the 400m IM field also included 2016 Olympic finalist Max Litchfield as a guest racer.

Scott led the race from start to finish, ultimately hitting the wall in a time of 4:20.69 to beat out Litchfield, who finished less than a second behind in 4:21.13. For Scott, his time tonight falls just .30 outside of his lifetime best of 4:20.39, a mark he produced at the 2019 edition of these BUCS Long Course Championships.

As for Litchfield, the man his Great Britain’s 400m IM national record holder, owning a personal best of 4:09.62 from the 2017 FINA World Aquatic Championships.

Rounding out the top 3 tonight in this men’s 400m IM was Jacob Greenow of Bath, with the 21-year-old putting up a bronze medal-worthy time of 4:22.09. Greenow recently took 3rd place in this event at the Luxembourg Euro Meet, registering a must slower time there of 4:27.04. His fastest ever is represented by the 4:20.01 logged at the 2019 British Summer Championships.

But rival Loughborough balanced Scott’s strong points for Stirling with a win in the women’s edition of the 400m IM. Abbie Wood, a member of the International Swimming League (ISL) NY Breakers, posted a winning time of 4:44.52. That gave the 20-year-old an over 8-second advantage over the rest of this morning’s ‘final’ field.

Additional declared winners were revealed in the men’s and women’s 800m free races, where we saw our first BUCS record go down. Jay Lelliott of Sheffield produced a solid mark of 8:01.97 to not only crush the field by 11 seconds, but also establish the fastest time in this event at a BUCS competition in 12 years.

For the women, guest swimmer Michaella Glenister registered the quickest time overall, with the 17-year-old clocking 8:53.69 to get to the wall first. However, earning points as the winner was 22-year-old Phylida Britton of UCL. Britton got on the board with a time of 8:59.82 as the only other racer to delve into sub-9:00 territory.

Benson landed lane 4 in the men’s 50m breast in 28.35, although teammate Ross Murdoch earned the quickest time of the morning in 27.21 as a guest swimmer. Kara Hanlon edged out the women’s field for the middle lane come tonight’s final, posting 32.01 in this morning’s heats.

Cassie Wild staked her claim on the women’s 50m backstroke for Stirling, scoring 28.46 this morning, while Swanswea’s Liam White did the same on the men’s side in 26.03.

*Scott hits the wall and looks up*
hehe nice