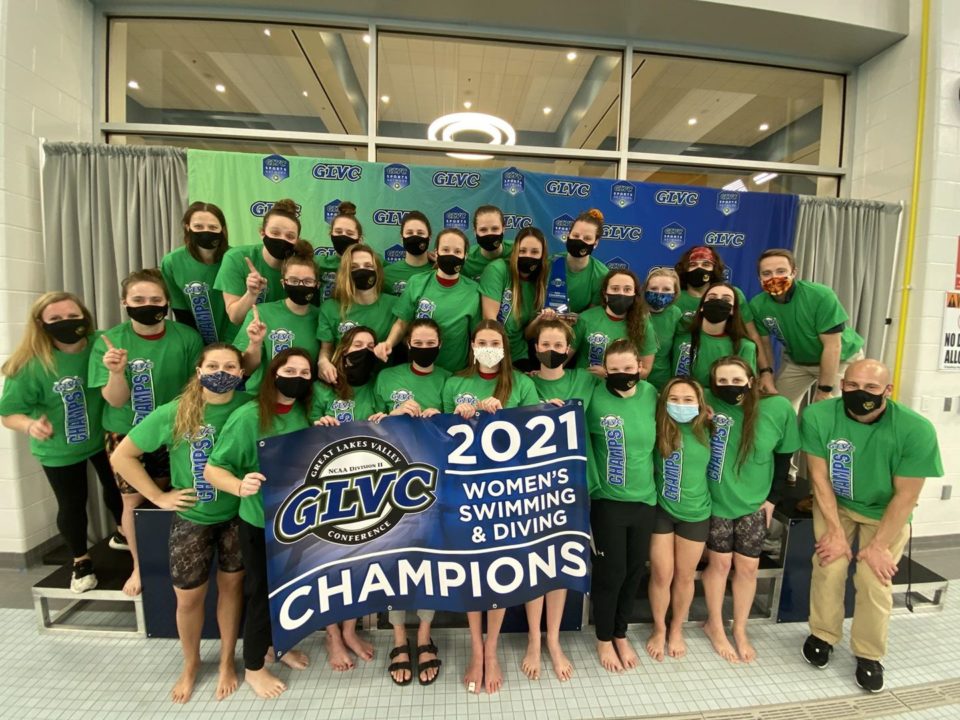 Drury won the 2021 Men’s Swimming & Diving team title tonight by 100 points over U Indy, snapping a 3-year win streak by the Greyhounds. This marks Drury’s 5th conference title in program history. Nathan Bighetti came up big for Drury, winning the 200 backstroke. The junior swam a 1:43.78, pulling away from Indy freshman Landon Driggers (1:44.67) on the back half of the race. Bighetti leads the NCAA DII this season with his season best of 1:42.69, which he swam in November.

Gregg Lichinsky and Karol Ostrowski, two of the top swimmers at these champs, had a showdown in the 100 free. Lichinsky ultimately won the race, posting a 42.57, with Ostrowski right behind in 42.75. Lichinsky got out to the faster start, splitting 20.25 on the first 50, compared to 20.49 for Ostrowski. Ostrowski is the NCAA DII record-holder in this race, having broken the previous record this past fall with a 41.50. Lichinsky is now 2nd amongst DII swimmers this season.

McKendree sophomore Fabio Dalu capped his tremendous meet with his best swim yet, winning the 1650 free in a new NCAA DII record. Dalu clocked a 14:55.42 to become the first DII swimmer in history to break 15 minutes in the event. It also completed a clean sweep for Dalu, complete with GLVC meet records in all 4 of his events, and McKendree records in all 4.

Missouri S&T’s Andy Huffman clocked a win in the 200 breaststroke, making it a breast sweep for the S&T men. Huffman swam a 1:57.50, finishing first by over a second. He is now second in the NCAA DII this season. Lindenwood senior Gerald Brown is the current DII leader in the race with his season best of 1:56.85, but came in 2nd tonight with a 1:58.60.

Indy picked up a win in the men’s 1-meter diving, with junior Benjamin Rader posting a final score of 435.50.

Lindenwood won their first Great Lakes Valley Conference title in program history tonight, beating out UIndy and Drury in an impossibly tight finish. The Lions beat Indy by just 3 points, and Drury was only 37 points behind Indy. The win by Lindenwood snapped a 4-year streak by Drury.

Indy was surging fast at the end of the meet, winning the final event, the 400 free relay, in GLVC record fashion. Johanna Buys led the squad off in 50.15, with Marizel Van Jaarsveld going 2nd in 49.90, Leticia Vaselli swimming 3rd with a 50.97, and Krystal Caylor anchored in 49.68, for a final time of 3:20.70. The Greyhounds impressively had the 3-fastest splits in the field. Lindenwood finished in a distant 2nd, touching in 3:23.51. Had Lindenwood finished worse than 2nd in the race, UIndy would have won the GLVC title.

Lindenwood was helped by Beata Maruszczyk, who took the 200 breast with a 2:13.72. The swim was just off Maruszczyk’s season best of 2:12.94, which ranks her 2nd in the NCAA DII this year.

Drury’s Laura Pareja won a tight race with UIndy’s Katie McCoy in the 200 back, completing a sweep of the backstroke events. Pareja got out to a lead in the first half of the race, splitting 56.45 on the first 100, compared to 57.09 for McCoy. Pareja held on to her lead, touching first in 1:58.52, with McCoy right behind in 1:58.68. The swim was a season best for McCoy, while Pareja leads the NCAA DII with her personal best of 1:55.66 from the fall.

Indy had a 1-2 punch in the 100 free, with Marizel Van Jaarsveld winning the race in 50.08. Krystal Caylor was 2nd with a 50.44. The swims were season bests for both, ranking Van Jaarsveld 2nd nationally, and Caylor 6th.