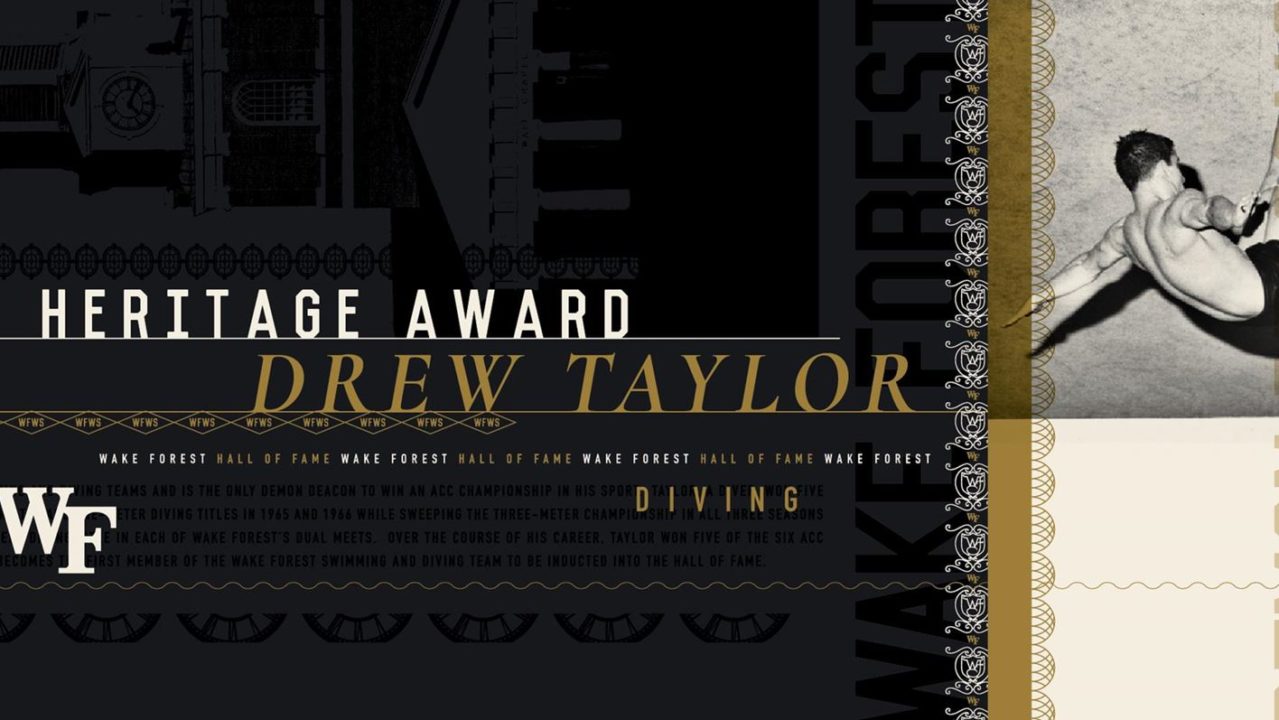 Taylor won five of the six ACC Championships in which he competed from 1964-66. Wake Forest no longer has a men's swimming & diving program. Current photo via Wake Forest Athletics

Drew Taylor made his mark at Wake Forest in a big way.  In fact, in a way that very few Demon Deacon athletes have ever done.

Among his soon-to-be fellow Hall of Famers, that kind of dominance has been exhibited by only a handful of Demon Deacon athletes throughout history.  Andy Bloom had it in winning 10 ACC titles in the shot put, discus and weight throw over his four years.  Janelle Krauss had it with nine ACC individual championships.  Nolan Swanson won seven ACC titles between cross country and indoor and outdoor track.

Taylor’s five individual ACC titles is the fourth-most in Wake Forest history of any athlete.  And Taylor was the only Deacon swimmer or diver to win an ACC Championship.  Only two divers in the history of the ACC won more diving titles than Drew Taylor.  And Taylor did it during an era in which freshmen were not eligible for varsity competition.

Taylor will be the Hall of Fame’s Heritage inductee.  A sub-committee of the Hall of Fame Selection Committee reviews the accomplishments of former Demon Deacons who completed their eligibility 40 or more years prior to their induction.

Taylor came to Wake Forest after graduating from Myers Park High School in Charlotte.  He was a high school All-American and a two-time state diving champion who won more than 20 AAU diving titles.

After graduating in 1966 with a degree in history, Taylor earned his law degree from North Carolina in 1969.  He served as UNC’s diving coach while in law school.

After obtaining his commission as a Wake Forest ROTC graduate, Drew served as a captain and legal officer/adjutant in the U.S. Army Medical Service Corps in Vietnam in 1970-71.  He was awarded the Bronze Star for Meritorious Achievement in ground operations against hostile forces on May 6, 1971.  He has been an active member of the North Carolina Bar Association for the last 50 years.  Taylor had several practice associations early in his legal career but has worked in solo practice for the last 30 years, serving the legal needs of Mecklenburg County citizens in the areas of civil litigation, family law, estate planning, and general business law.

“I am honored to be inducted into the Wake Forest University Sports Hall of Fame as the first member from the swimming & diving teams of 1956-1981. To have my name included with such legends as Arnold Palmer, Tim Duncan, and my contemporaries, Bob Leonard and Brian Piccolo, is very humbling,” said Taylor upon his induction.

“I am grateful to Coach Leo Ellison for having the faith in me to award me his only full swimming/diving scholarship. I chose Wake Forest for the academic opportunities it offered, and Leo made that possible. He encouraged and allowed me to excel both athletically and academically, and he knew I wanted to get my law degree after graduating from Wake Forest.

“I would also like to acknowledge the encouragement and support that Coach Pat Earey, the swimming coach at UNC Chapel Hill, gave me over my entire diving career, including understanding my decision to attend Wake Forest. After my graduation from Wake Forest, he hired me as the head diving coach at UNC and helped me get a scholarship to the UNC School of Law.

“I want to thank all my Wake Forest friends and supporters, especially my classmates Fred Sprock and Jim Simeon, who assisted me in my diving training and promoted my nomination to the Hall of Fame.

I also thank Louis Bissette for his formal nomination of me to the 2021 HOF class. Louie was with me in Queens, New York in 1964 when I competed there in the U.S. Olympic Diving Trials.

“I am especially proud and honored that the Wake Forest swimming and diving alumni came together to support my nomination to the Hall of Fame. Bruce Mallette and fellow swimming/diving alumni reunion committee members: Tom Laraway, Jeff Calvert, and Gregg Bundschuh. They provided their time, energy, research, and background information to recommend and support my nomination. I hope my induction provides the 200-plus alumni of the Deacs Swimming and Diving program an acknowledgment of their hard work and many great performances in ACC competition.

Welcome to the Wake Forest Sports Hall of Fame, Drew.  It might have taken some time to get here, but your legacy is most deserving.

Congratulations Drew! I came to Wake Forest in the fall of 1967 so I just missed you, but your reputation was well known by all of us. Long overdue accolade.