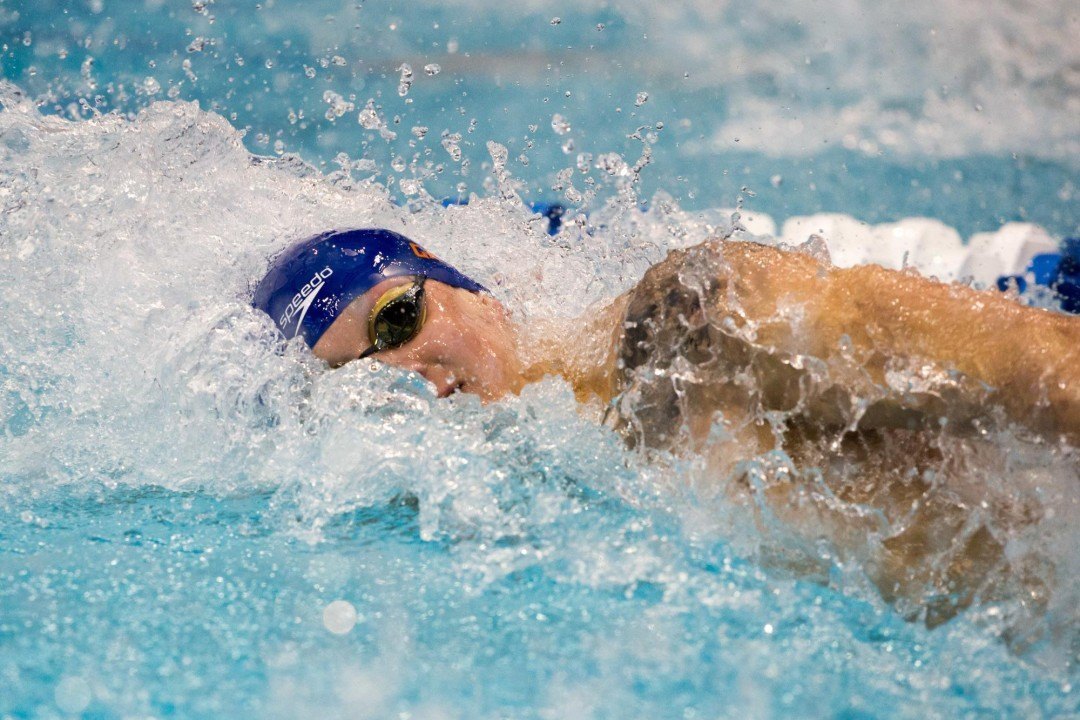 The sophomore Dressel had three outstanding individual wins and a stellar relay split to lead Florida to victory. His 19.41 in the 50 free was the best time of 2016 in the event, and was Dressel’s best time since last November’s mid-season rest meet for Florida. And even more impressive was the 18.7 split he dropped on the end of Florida’s 200 medley relay, bringing the Gators back from a half-second down to touch out Tennessee. Dressel’s reaction time (0.23) was even pretty average on the swim, meaning most of his speed came in the pool rather than on the relay exchange.

Dressel, who swims mostly sprint freestyle and butterfly in the postseason, stepped into the 100 breast and beat one of the NCAA’s top specialists in that stroke, going 53.07 to beat Tennessee’s Peter John Stevens (53.21). Dressel also won the 200 IM late in the meet, going 1:46.40.

It was an all-around great performance for Florida in bouncing back from a tough SEC loss last week at home against Auburn. That meet, swum in long course meters, came down to just 9 points, with Florida losing at home. But the Gators won all but 3 swimming events on the road against the Vols.

Tennessee did manage to sweep diving with the combination of Mauricio Robles (3-meter) and Liam Stone (1-meter). The Vols also got a great 1:58.90 in the 200 breast from Ethan Browne immediately after a 1:42.04 blowout win from Sean Lehane in the 200 back.

Tennessee actually swept the relays at home, but Florida still managed to win handily by taking 12 of 14 individual events.

The key matchup of the day was in the sprints, where SEC senior powers Natalie Hinds and Faith Johnson did battle. Hinds, the Florida Gator, won both events, including a narrow 22.48-22.49 touchout of the 50 freestyle to keep an early Florida run alive.

McKnight also went 2:01.48 to win the 200 IM late to become the third of four Florida double winners. Kahlia Warner was the other, sweeping both diving events.

One of the underrated key wins for Florida, though, came in the 200 breaststroke. The Gators have struggled in the breaststroke events in both genders this year, but sophomore Paige Scheriger – a Tennessee native – went a lifetime-best 2:14.37 to win the 200 breast for the visitors.

Scheriger’s improvement in the 200 breast still doesn’t put her in NCAA scoring range, but at least gives the Gators a rising threat in the SEC scoring ranks. And though Tennessee went 1-2 in the 200 medley relay to open the meet, Scheriger’s breaststroke leg was actually a high point for the visitors at 28.8 – one of three 28.8s that led the entire field.

The big difference-makers on that medley relay were Tennessee’s Kira Toussaint, the Florida Gulf Coast transfer who led off in 25.6, and both Volunteer flyers crushing their Florida counterparts with Maddie Banic going 23.5 and Heather Kiger 24.4.