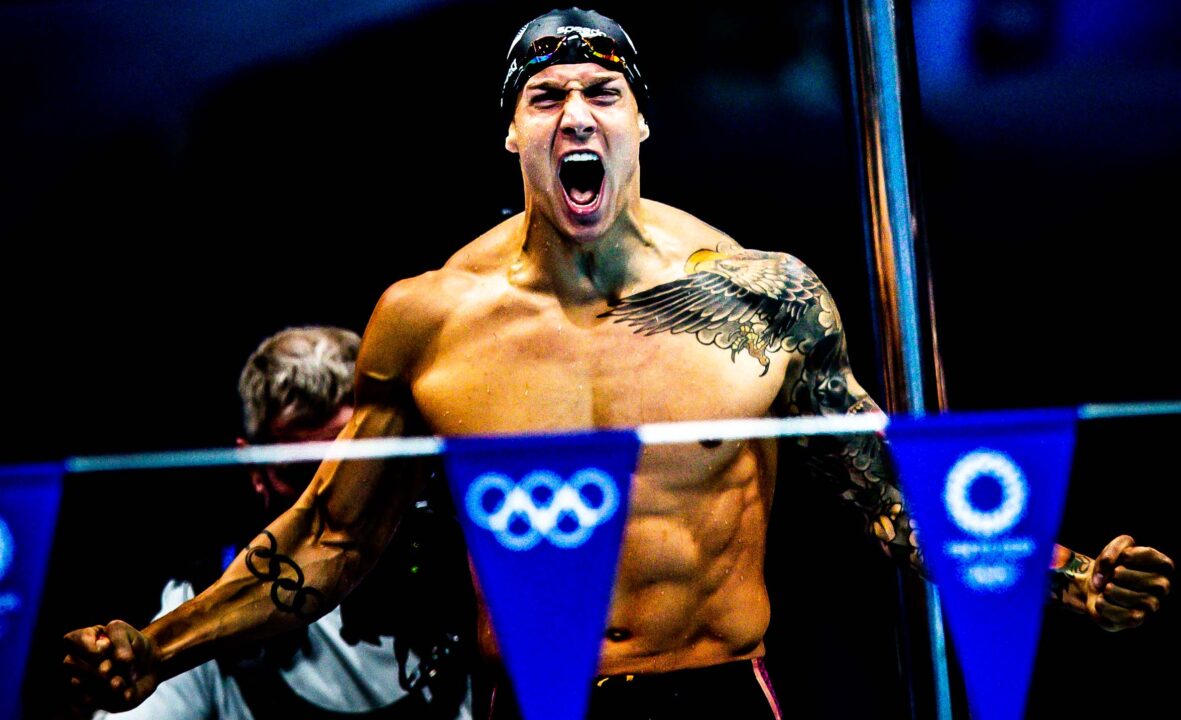 American Olympian Caeleb Dressel was in the news recently, having swum as part of a Gainesville pro group at a University of Florida intrasquad over the weekend.

The multi-gold medalist from both Rio and Tokyo logged times of 19.18 in the 50y freestyle and 47.32 in the 100y butterfly to whet his racing whistle under his relatively new coach choice of Anthony Nesty. Dressel made the move to Nesty from longtime guide Gregg Troy in November of last year.

Dressel’s name was also in the media on a more mainstream scale, as he spoke to the international men’s magazine Maxim. The 25-year-old newlywed spoke on his Olympic glory, having icon Michael Phelps as a mentor and how his post-Tokyo break brought him some much-needed peace.

Recalling how he felt after taking the men’s 100m freestyle, his first event at his 2nd Olympic Games, Dressel told Maxim, “Winning that first gold medal was a hugely satisfying moment. When I knew we’d won, there was a definite release and rush of everything that’d been built up inside. It’s like an emotional overload.

“It was short-lived though, because I still had so much ahead of me at the Olympic Games. I still had a lot of success I wanted to achieve.”

Helping to keep Dressel’s eyes on the prize was the winningest Olympian of all-time, Phelps, of whom Dressel said, “If you’re a swimmer, you look up to Michael. That’s just the way it is.

“At these Olympic Games I probably texted Michael more than my wife! I leaned on him a lot, and he was clear that he was always there for me when I needed. It felt good to know I’d made him so proud.”

Although Dressel indeed raced in the International Swimming League (ISL) in the fall, his heart and soul have been focused on things outside of the water after making such a statement on the world’s biggest stage this summer.

“I just want to make sure I enjoy my time with my family. They’re my biggest support in everything I do, and creating time with them is just as important as anything else.

“I’m still taking in everything that happened in Tokyo, so it’s impossible to get my head around Paris. In fact, it’s better if I don’t think about it, and take a little time to enjoy what I won this summer.”

“Since Tokyo, I’ve just been enjoying the time with my wife. We never got our honeymoon, and so we promised ourselves we’d do that once I got back. That seems like a pretty good celebration to me.” (Maxim)

Milak vs Dressel in the 100m part 2 I can’t wait.
That race was mind boggling

Dressels’ reign will end soon! He has already peaked and his body has reached its climax in Tokyo. Don’t blame him though, what he accomplished in Tokyo winning 3 individual Golds in the toughest sprint fields against guys like KK and Chalmers was remarkable! It’s a shame we only saw his peak in 1 Olympics cause 25 is old in swimming especially for a guy with his body and the young guns like KK, Hwang, Popovici and Milak will take over. In fact I don’t think he will even medal in Paris.

Are you the new Ol’ Longhorn ?

That’s a harsh statement. Sure, the young guns and up and coming. And sure, the 100 free was a close call in an extremely stacked field.
But right now I don’t see anyone going near sub-21 in the 50, and frankly I don’t see anyone but Milak going sub-50 in the fly.
My bet for this year’s WCs is 2 golds and two silvers(Chalmers takes the 1free, Proud takes the 50 fly), and for Paris one gold(50 free) andone silver(100 fly). Might be off the podium in the 1free, give you that.

If Chalmers chooses to race at Worlds this year, most Aussies are focusing on Commonwealth Games which only come around every 4 yrs

Yeah, he’s going to be so “old” in Paris. I wonder what your “thoughts” are about Rylov, Murphy, Manadou, Peaty, Proud, Seto, Scott (not to mention McKeon, Sjostrom, King, Ledecky). Dressel owns the 50m free and the 100m fly. Milak is a great 200m fly swimmer, but his 100m fly performance in Tokyo was a bit of a fluke; he wasn’t close before and hasn’t been since. Sure, the 100m free is stacked and wide open, but Dressel’s in the mix and could win it.

Agree with you about the 25 not being old though.

My thoughts about the other guys you mention:
Seto won’t medal in Paris. Proud probably can medal as 50 free is not so unfriendly to old guys. Manaudou has a small chance to medal for similar reasons. I won’t be surprised if Rylov or Murphy ends up on podium, but will be shocked if it’s the highest step of the podium. Scott might repeat the McKeon story but I don’t think the probability is very high.

As for Dressel, I think he’ll definitely medal in Paris, maybe he can win one or two individual golds, especially in 50 free, but it will be hard for him to dominate like the past few years.

Last edited 3 months ago by Stewart 100 back gold in Fukuoka
0
0
Reply
Ledecky will go 3:55 in Paris
Reply to  SigmaAlphaBetaMale

I will believe Dressel has peaked when he stops going personal best times. That hasn’t happened yet.

As for KK, he is obviously one of the favorites for the 100 free in Paris, but he has spent time in the hospital every year. I am not confident he stays healthy enough to remain on top in 2024.