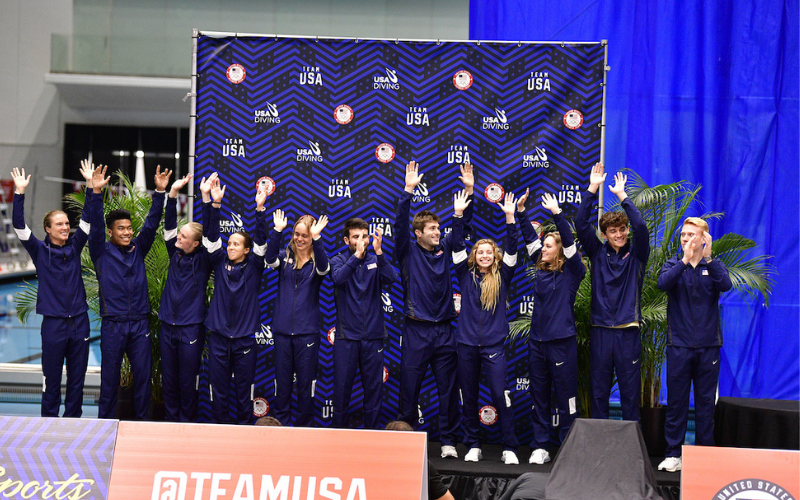 Indianapolis, Ind.- On the final day of the 2020 U.S. Olympic Team Trials-Diving, four more athletes were selected to represent Team USA at the upcoming Tokyo Olympics. 17-year-old Tyler Downs, Andrew Capobianco, Delaney Schnell and Katrina Young punched their tickets to the games after two drama-filled events that each came down to the final dives.

Downs, who came into the finals seated 20 points out from leader, David Boudia, in fourth place, began his list with determination consistently scoring well and climbing up in the rankings. On his fifth dive, he secured his lead with a 92.75-point Reverse 3 1/2 Somersault Tuck. Downs ended his night with 1333.75 points to win the Trials, becoming the youngest member of the 2020 Team.

Capobianco, who also qualified in the 3-Meter Synchro with partner Mike Hixon, started the final round in sixth place, over 60 points behind Boudia. The recent NCAA Champion did not score under 75 points on a dive in the entire round, with his best dive being his third, Reverse 3 1/2 Somersault Tuck which scored a 94.50. In the end, the competition for the second spot went all the way down to the final dive with Capobianco, Hixon, Boudia and Briadam Herrera all within points of each other heading into the final round. In the end, Capobianco’s 81.70-point Forward 4 1/2 Somersault Tuck was enough to edge out four-time Olympic Medalist, David Boudia, by four points for the second spot. This marks the first Games since 2004 where Boudia will not compete.

The Women’s 10-Meter finals also had fans on the edge of their seats. Coming into Finals, Katrina Young and Murphy Bromberg sat in the top two positions with 2016 Olympian, Jessica Parratto and Delaney Schnell trailing less than 20 points out of qualifying scores. Throughout each round, the divers jockeyed for the top two positions. Eventually in the third round of dives, Schnell, who will also represent Team USA in the 10-Meter Synchro with Parratto, pulled ahead after scoring 84.15 points on her Back 3 ½ Somersault Tuck. Schnell ended the competition with a total score of 1021.90 winning by 37 points.

The battle for the second position came all the way down to the last dive. After missing the mark on her Back 3 1/2 Somersault Tuck, Young had some ground to make up throughout the rest of her list. Scoring no lower than a 73 on her next three dives, she surpassed Bromberg on her last dive earning her Olympic spot by three points.

“First of all, I would like to congratulate all of the divers and coaches who qualified for the Olympic Games,” said USA Diving High Performance Director, Dan Laak, “I am extremely proud of they way they have fought through all of the adversity they’ve faced for the past 15-plus months. We have a great team traveling to Tokyo for the Games and I can’t wait to show the world exactly what Team USA can do. With the mix of experienced and first-time Olympians, not only will we shine this Games, but we will do so for years to come.”

Team USA will send a total of 11 athletes to the 2020 Tokyo Olympics with three athletes representing their country in two events.

“Training was interesting for a while; I was training out of my coaches’ garage gym and doing flips in his driveway and mats. It was interesting, and we made it work, and ultimately it was kind of fun to change it up. Personally, I think it helps me a lot with Olympic-style lifting, really full of speed and power. It helps in our acrobatic sport. “

If she knew going into her final dive that she had a chance to make the team:

“You always hear the scores, but it filtered through me, and I had no idea who was really close to me, and I thought that anybody could be there on my tail. So the only thing I was trying to think was to just stay in the process.”

What she thought about the ground she had to make up heading into finals:

“I think honestly, it was just consistency throughout. I didn’t have a very good prelim or semi, but I was on my head, and I knew that after making the team in synchro, I just had to go in, and I’ve and have fun with it, and it worked out.”

If medaling at 2019 Worlds was a stepping point to this moment:

“I don’t think I have ever walked away from a defeat like this so happy ever in my career. It normally takes you a couple of hours or days. I look at Andrew and how he has battled back from a hard 207C in the semifinal and stepped up to the occasion, and he got the job done. For Tyler, I think everyone in this building had a tear for him; he has an exciting future, and I’m super proud of him. Competition is a funny thing. This was by far not my best competition, but in competition, there are highs and lows but taking it one step at a time, even if you don’t feel good, trying to finish strong is how you do it.”

“I came in with no expectations just to have fun, dove my best, and ended up on the Olympic team.

On his decision to compete in platform and 3-Meter:

“Platform last night, a lot of people asking me if I was going to compete in that event considering I have a shot on 3-meter, but my coach decided we were going to do it to get the experience and have fun. We moved up two spots from 7th to 5th. Tonight I had no expectations just to have fun, dive like I know how, and it went really well.”

Mindset going into the finals

“I was pretty far back. I didn’t come into tonight with any expectations; I was just trying to get all my dives. I have been working on the new dives, the 207, and it hasn’t really gone my way. It was big to hit that one and show that I could that. “

On dividing his training between synchro and individual:

“For dividing my training between synchro and individual, I say it’s pretty even. Especially since Mike has been in Bloomington the past week, I have probably done an even split between individual and synchro just cause I was trying to get the new dive ready. Since Mike is in Michigan now, we probably don’t have as much synchro diving as we used to. We try to rely on the pace for counting.”