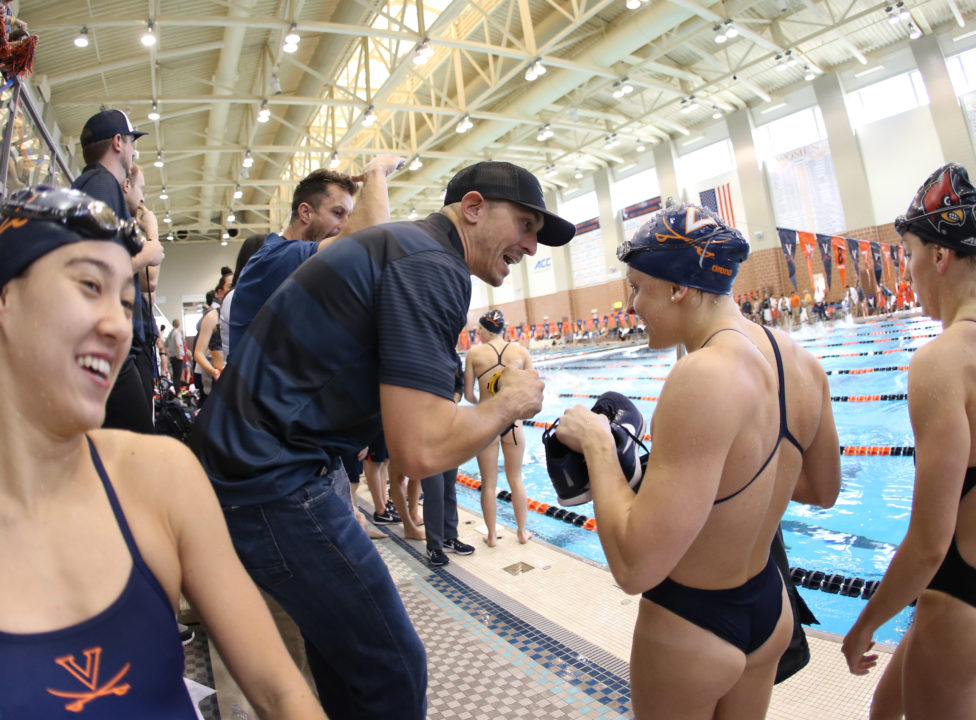 Since we know you're dying to ask, we'll answer your questions here. No, she wasn't in a tech suit. No, one else in the NCAA has broken 2:07 this season. Archive photo via courtesy of Virginia Athletics

The UVA Cavaliers, the consensus #3 pick in our most recent round of NCAA power rankings, toppled the #5 NC State Wolfpack in a battle of ACC rivals Friday afternoon.

Freshman Kate Douglass shined with two individual wins and helping UVA sweep the relays. After swimming fly on UVA’s 1:35.40 200 medley relay (splits not yet available), Douglass won  the 50 free in 22.22, roughly seven-tenths off of her season and lifetime best of 21.53. But the big swim came in the 200 breast, where she rocked a 2:06.98. Yes, in a practice suit. Douglass was already the only women under 2:07 this season and the 200 breast, pacing the nation with a 2:06.19 from the UT Invite. Douglass complete her stellar session by anchoring UVA’s 400 free relay in 47.69 overcoming nearly a two-second deficit to give the Cavaliers the win in 3:16.62.

Paige Madden also won three events for the Cavaliers, sweeping the longest three free events. She earned the first individual win of the day with a 9:43.90 victory in the 1000 free. NC State had two women within striking distance – Makayla Sargent and Kate Moore – but they ultimately finished 2nd and 3rd with times of 9:45.00 and 9:47.98, respectively. Madden jumped back in ten minutes later for the 200 free, and jumped out to an early lead. Kylee Alons tried closing the gap, but ultimately couldn’t, as Madden kept UVA’s win streak alive with a 1:44.66. She’s currently ranked 4th in the nation with a 1:43.52 from the UT Invite. Madden then wrapped up her day with a 4:46.16 victory in the 500 free.

UVA had a few swimmers suit up for a swim or two, with either all or most of those suited swims counting as exhibition. One of those swims was Caroline Kulp‘s 1:56.39 in the 200 fly; she touched the wall first by nearly two seconds, but was marked exhibition in the results.

CHARLOTTESVILLE, Va. –The No. 7/3 NC State men’s and women’s swimming and diving teams set three pool records on Friday at the ACC showdown in the University of Virginia Aquatic Center as the Wolfpack men captured their sixth consecutive dual meet win over the Cavaliers, 169-131.

Nyls Korstanje and Stewart led the Pack in scoring for the men, and on the women’s side Alons posted the most points for the squad. Korstanje, Stewart and Alons, along with teammate Ross Dant, each recorded multiple individual event titles on the day.

MEET HIGHLIGHTS:
In the women’s 100-yard backstroke, Katharine Berkoff (52.37) and Muzzy (53.26) posted a pair of NCAA B cuts on their way to a one-two finish. For the second consecutive weekend Berkoff swept the backstroke events thanks to a 1:53.43 finish in the 200-yard backstroke.

Virginia had four individuals record a win in the men’s meet against the Wolfpack. Junior Keefer Barnum (Louisville, Ky.) led the 100-yard breaststroke with a time of 53.66. Junior Matthew Otto (Newark, Del.) finished with a time of 1:57.92 in the 200-yard breaststroke to top the event, while sophomore Casey Storch (Great Falls, Va.) captured a time of 1:47.99 for the top time in the 200-yard individual medley. Senior Bryce Shelton (Vienna, Va.) won the 1m board with a score of 322.73.

“This was a great team performance this afternoon,” head coach Todd DeSorbo said. “We talk continuously about everybody on the team stepping up, everybody on the team knowing their role and everybody on the team being focused and committed to that role, and tonight both the men and women really came out and showed that. I was definitely pleased with how the team executed all the races, how they battled hard all the way to the finish in every race and the energy the team had throughout the competition. It’s a great rivalry with NC State, having coached there for a while and knowing their coaches very well. They’re a great team and are very well coached. They definitely bring out the best in us and I hope that we bring out the best in their program.

“Our women got the meet started off fast with a 200 medley relay that would win most meets around the country, no matter what time of year, and Paige Madden with a triple that’s very challenging, winning the 1000, 200 and 500 freestyle. She’s so disciplined, so controlled and just swam great races tonight. Alexis Wenger had a little bit of a breakout in her 100 breaststroke, beating the reigning ACC champion tonight, and is starting to make a name for herself. Kate Douglass did what she does best, dominating with a win in the 50 freestyle and 200 breaststroke and was an integral part of both relay wins, especially the last freestyle relay where she came from almost two seconds behind to seal the win. We also had some great performances from a lot of other people, Maddie Donohoe, Ella Nelson, Morgan Hill, Caroline Kulp, Carter Bristow and Abby Richter to name a few. The men fought hard, as it’s the best showing we’ve had against NC State in quite some time, proving that they are a significantly improved team and will most definitely be a force to be reckoned with in the very near future. We had some exceptional performances by Keefer Barnum, Ted Schubert, August Lamb, Justin Grender and our breaststrokers and IM’ers flexing at the end of the competition to go 1-2-3. I am excited about the direction our men are headed and looking forward to another tough day of competition tomorrow here at home with UNC. We are going to have to do a great job of recovering tonight and coming back with the same emotion we had today.”

Anyone know status on Jack Walker? Didn’t swim vs VT or NCST.

Ooph. Hoping he has a speedy recovery but ACCs is only a month away.

Caroline Kulp swam a 1:56 2Fly as exhibition? Looks like best time and right outside of UVa top ten list. Douglass isn’t the only freshman improving under Todd.

Josh Fong also had a 1:44 2 Fly as an exhibition, another freshman dropping.

There were some fast times from exhibition swims – the Seems they were “bubble” athletes that rested/suited. Prime example was Josh Fong going 1:44 2fly. That would have WON the event and was a massive best time.

It was mixed – some swimmers looked suited others did not.

Only suited swimmers were a handful who are on the bubble for conference spots, or outside the bubble doing their last swims of their season/uva career. And they all swam exhibition.

Yes, this seems to be correct.

Not all of them swam exhibition

You can look at all the race videos on the UVA Swimming youtube. Every single suited swimmer swam exhibition.

Thank you! That explains the EXH next to times that would normally place! Are those swimmers tapered?

jeeeeeeez. What would Lily King go in season? Not that it’s a straight comparison ( obviously different programs have different training plans ) but it’d be fun to see where they compare pre-shave-taper!

Uva swimming 1-2 seconds faster across the board and in some cases more from last week. Wonder if it was excitement over racing their rival or a little bit of the rest factor.

Tell me if I’m wrong but haven’t we seen this from UVA since Todd arrived? They swim alright mid season, fast the last dual meet or two, faster at ACCs and then are real good at NCAAs? Just seems like they always come out of nowhere the last two months.

Acc is 3 and a half weeks out. Might be coming down a litle?

Women? Most likely not really

Ever been to Christiansburg? Hard to get excited….

They wanted the win badly they were rested a bit

VA were not going shake hands until NCSU swimmers insisted. Then one of the VA coaches told each of the swimmers “See, I’m shaking your hand. Now
SwimSwam cant report that.” Classy.

This sounds so made up

I can confirm it did happen