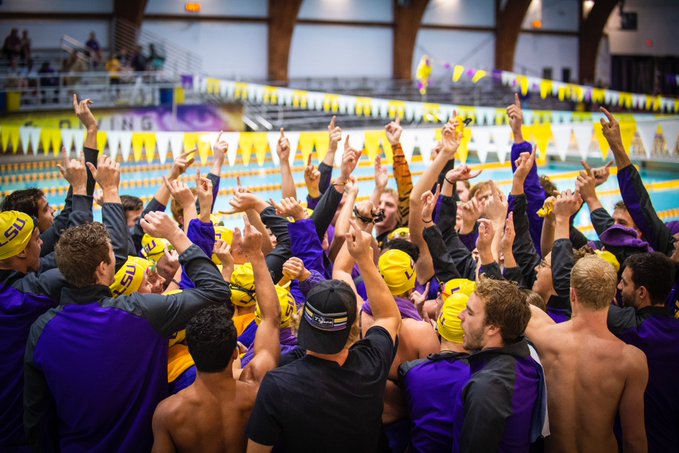 A nailbiter of a meet came down to a huge 100 fly showdown, with two LSU seniors coming through to power what would end up a two-point win over Mizzou. Stock photo via LSU Athletics

Heading into the 100 fly, LSU led visiting Missouri by just eight points with four events to go. It was a Cinderella story for LSU, firm underdogs in the meet, but it looked like the Tigers just might run out of gas. Prior to the meet, Mizzou’s women were ranked #13 in our NCAA Power Ranks. LSU wasn’t ranked and didn’t receive a top-20 vote. In the CSCAA dual meet poll, Missouri was 12th (and coming off a top-10 stint the poll prior), while LSU didn’t receive any top-25 votes.

Mizzou had star sprinter Sarah Thompson and were heavy favorites to win the meet-ending 200 free relay, a big point swing late. That meant LSU had to build up a lead to survive Missouri’s late onslaught.

LSU had to grind just to get here in the first place. After Thompson won the 100 free, the meet was down to just one point, with LSU leading 85-84. Through the 200 back and 200 breast, the lead stayed slim, though LSU had increased the margin to three points after the breaststroke. A clutch 500 free win from freshman Summer Stanfield (in a lifetime-best of 4:48.21, bettering her previous best time by almost three seconds) pushed LSU to an eight-point spread. But Mizzou had All-American Haley Hynes up in the 100 fly, her career-best from November ranking in the top 50 nationally.

The Tigers countered with seniors Helen Grossman and Nicole Rozier, who came through with a massive 1-2 finish over Hynes, effectively sealing the meet for LSU. Grossman was 53.94 for the win. That’s close to her career-best 53.2 from last year’s SECs. Rozier went 54.60, the fifth-best swim of her career behind two SEC swims from last year, a 2018 Art Adamson race and a February 2019 dual meet 54.0.

That launched LSU into a 15-point lead. They used their clear-cut diving advantage to increase that lead to 18 after 3-meter, and though Mizzou won the 400 IM and the final relay, the damage was done, and LSU was walking out of the pool with a hard-fought SEC dual meet win by two points. Grossman and Rozier beating Hynes was a 12-point swing.