Do It For The Memories 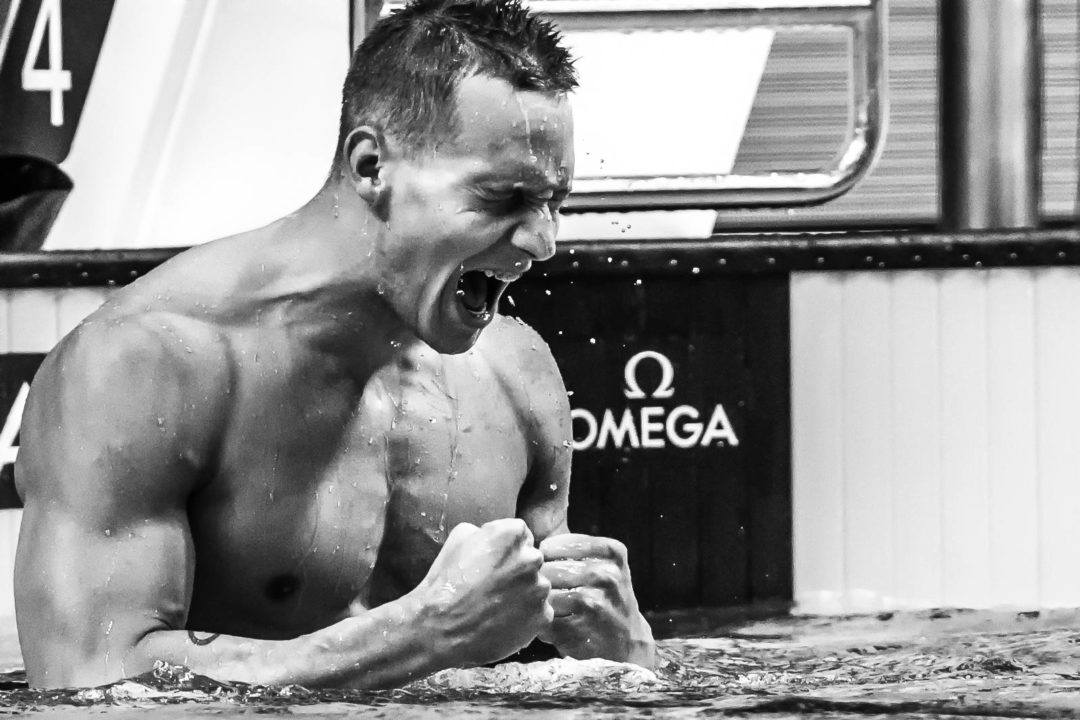 I have a confession to make. My confession is that I’m a pure land mammal. I was never a swimmer like you are. Current photo via Mike Lewis/Ola Vista Photography

I have a confession to make. My confession is that I’m a pure land mammal. I was never a swimmer like you are. Growing up, I was a soccer player. Played it my entire life. From the moment I could start walking until I graduated college and moved into the real word at 22, a ball was always at my feet and a soccer field was never far from my mind.

In the nearly 20 years that I spent playing soccer, one game sticks out in my mind, a game that, to this day, I’ve never forgotten. I was about 14 years old, and my team, the Lakota Cannonballs from Cincinnati, Ohio, was playing in the semi-finals of State Cup, which for competitive soccer is the most prestigious tournament you can win any given year, as you have to slug your way through the best teams in the state in order to win it. To cap it off, we were playing against our arch-rivals, Premier Adidas from Columbus. We were ranked #1 in the state. They were ranked #2. The winner advanced to the final. It was guaranteed to be a blockbuster of a game, no doubt.

Straight from the kick-off, the game is an absolute war. It’s mayhem from both sides. We hated them, and they hated us. Tackles were flying in all over the place. Everyone was running that extra yard as hard as they could, and more than they normally would, simply because of the occasion. However, 10 minutes into the game, my team breaks the deadlock and we take a 1-0 lead. And, guess who got the goal? That’s right – Yours truly! We managed to win a corner kick, and from the corner kick, the ball slowly rolled out to me at the top of the box and I hit an absolute cannonball (pun intended) into the bottom corner of the goal. The keeper had no chance. 1-0 to the good guys!

Sigh…….the fun didn’t last. Within another 10 minutes, our opponents tied the game right back up. We made a silly mistake at the back, gave the ball away needlessly, and gifted them an easy goal. 1-1, and we were back at even parity. With their gift of a goal and half-time within site, they were galvanized and we were deflated. The battle ensued until the referee blew for half-time, and at this point, I don’t think both teams had ever been this exhausted in a game. It was a welcome break, both physically and mentally.

Our coach formulated our strategy for the 2nd half, we took to the field, and we were ready to finish the business. That was the best thing about my team that I played on growing up – An amazing group of guys who, no matter what the situation and no matter who the opponent, absolutely refused to ever give up or think we could lose a game. We never feared anyone, period. It was our greatest edge.

We came out on fire in the 2nd half and immediately put our opponent on the back foot. We pressed, and pressed, and pressed as hard as we could to get a winner, but they held strong and we simply couldn’t find the breakthrough. We hit the post. We hit the crossbar twice. Their goalkeeper made some unbelievable, ridiculous saves to keep them in the game. Every time we got close, we just couldn’t quite get close enough to close the door.

The game remains tied at the end, and so we go to extra halves. It’s golden goal, so the first team to score is the winner and the loser is out of State Cup for another year. As exhausted as both teams were, the desire, commitment, and determination was simply too strong on both sides and the game remained a complete deadlock, even until the end of the 2nd period of extra time. The game was destined to go to penalty kicks to decide a winner. That is…………until I made a fatal mistake.

At the very end of extra time, they win a corner kick. I identify who my mark is going to be, and I move towards him at the top right edge of the box. As their player moves to kick the ball, I make a rookie, novice, stupid mistake. I get caught ball watching and I lose track of the guy I’m supposed to mark. From here, everything moves in slow motion.

I see the ball flying into the box.

I glance to my left and see my mark, the guy I’m supposed to be defending, running to the exact spot in the box the ball is going to land.

I freeze. I can’t move. It’s like I’m paralyzed. I’m seeing everything play out in front of me and my body wants to act, but my mind has locked my body into a vice-grip from which I can’t escape. I feel completely helpless.

My mark moves in, the ball comes to him, he heads the ball into the goal, and we instantly lose, getting knocked out of State Cup…..as the #1 team…..by our arch-rivals……and because of a mistake that I made, because I screwed up and let the team down. It was my fault. I failed them.

The players, coaches, and parents from Premier Adidas go berserk. They storm the field and celebrate as if they had just won the final. Me? I immediately collapse face down. My hands are covering my face. Tears are pouring out of my eyes and into the muddy grass. I’ve never felt so ashamed, so embarrassed, and so disappointed in myself in all my life. My team didn’t lose the game. I lost us the game. I let them down, myself down, and most important, I let my coach down, a man who was like a second father to me. I wanted to crawl into a dark hole and never come out.

All of a sudden, I feel two hands grab me by the shoulders, lift me up, and stand me on my feet. It’s my teammate and team captain, Andy. He puts his arm around my shoulders, drags me over to our team area where the rest of the team has gathered, and throws me into them as hard as he could. In that moment, they all grab hold of me, give me a hug, pat me on the back, and try to support me as much as they can.

“Will didn’t us lose this game. WE lost us this game. If we didn’t want to lose, we should have put them away when we had our chances. We win together, and we lose together. It’s as simple as that.”

I went on to play 4 years of NCAA Division 1 college soccer, and to this day, no game I’ve ever played has ever meant more to me than that loss. In fact, as odd as this may sound, it’s my favorite memory from my entire soccer career. I wouldn’t change that game for anything in the world, even if I could. I’d leave that memory just the way it is, because in that dire failure, I learned things I would never have learned otherwise and experienced emotions, both high and low, that I’ve rarely felt since.

I love and cherish the memory of that game. And, it taught me a valuable lesson that I didn’t realize until many years later:

I won hundreds of trophies and medals in my soccer career. Most of them, I have no idea where they are. They vanished years ago. The thing is that trophies don’t last. They’re material things that eventually give way to time and circumstance and the meaning they once held slowly starts to lose its value the older you get and the more you move into your life and the world.

Memories mean more than trophies or medals because they’re always there, you can always see them and you can always feel them. They provide real, meaningful, long-term value for the mind and soul. They allow you to stay connected with an important period of your life that shaped you, impacted you, and made you.

As of writing this, it’s the night before I travel with the Florida Gulf Coast University Swimming & Diving team as we head to the University of Georgia to compete at the CCSA Conference Championships and pursue our 4th straight Conference title and 9th overall. I hope we win. I hope we compete, fight, battle, and come away with a well-deserved victory for all of our hard work over the season, something each and every member of this wonderful team has dedicated themselves to throughout the entire season and richly deserves.

But, more importantly than that, I hope they create memories.

And, if they get to lift that championship trophy, I hope they soak in every minute, every second, and every face of the people surrounding to them who stood with them, cheered for them, fought with them, and celebrated with them. After all, the life of an aquatic athlete is short, and in the end, their memories are all they’ll have left.

Will Jonathan is a sports Mental Coach from Fort Myers, Florida. His clients include athletes on the PGA Tour, the Web.com Tour, Major League Baseball, the UFC, the Primera Liga, the Olympics, and the NCAA, as well as providing numerous talks and presentations on the mental aspect of sport and peak performance to various sports programs and organizations across the country. He also works as the official Mental Coach for the Florida Gulf Coast University Swimming & Diving Team.

If you’re interested to learn more about Will and his work, head on over to his website at www.willjonathan.com or connect with him on Twitter at https://twitter.com/_WillJonathan_

Will Jonathan is a sports Mental Coach from Fort Myers, Florida. His past and present clients include athletes on the PGA Tour, the Web.com Tour, Major League Baseball, the UFC, the Primera Liga, the Olympics, and the NCAA, as well as providing numerous talks and presentations on the mental aspect of …

More from Will jonathan
See All