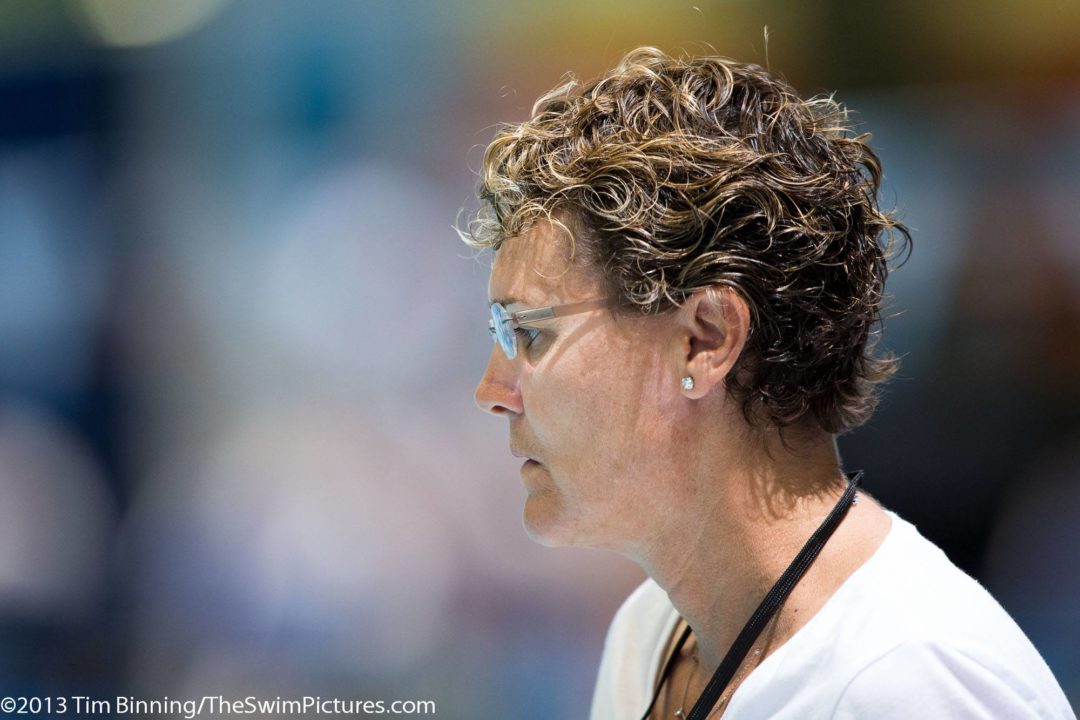 Teri McKeever's group leads the meet in both A- and B-Finalists and actually gained two points from seeds despite a costly relay DQ. But Georgia hung tough and is seeded to outscore the Golden Bears by 17. Current photo via Tim Binning/TheSwimPictures.com

As expected, Friday was a big day for Cal with those 100 back and fly races, but Georgia hung tough enough to dramatically soften the blow. The Golden Bears lead the meet with 7 “A” finalists (not counting diving or the 800 free relay) and also lead with 5 “B” finalists. Georgia, meanwhile, put 6 up and 4 down, plus they’ll have ace diver Laura Ryan competing tonight. The downside for Cal is that they lost one big “up” with that 200 medley relay DQ. Those double points will put Cal in a big hole early tonight.

Texas A&M had a great morning for A-finalists, putting 6 up themselves. They don’t have the depth of Cal or Georgia, but should be in the hunt for multiple NCAA titles tonight (Breeja Larson in the 100 breast and Paige Miller in the 100 back seem like strong contenders if not the favorites).

Stanford came back down to earth some after blowing the roof off the building last night. Then again, Stanford did most of its day 1 damage on relays, and these ups/downs only reflect one relay since the 800 free relay is swum as timed finals at night.

We’ve once again scored out prelims and compared them to the psych sheets, which we scored out a few weeks ago. This should tell us which teams helped themselves and which faded from their seeds. The +/- below shows whether a team gained or lost points from their seeded places.

Despite Cal putting more swimmers both up and down, Georgia is actually seeded to outscore them. That’s largely because Georgia took a bunch of very high seeds in each heat while Cal snuck out quite a few 7th and 8th place slots this morning. That seems good for Georgia on the surface, but also means Cal has a lot more points available to pick up tonight compared to their rivals. The other big factor, of course, is that relay DQ. It’s surprising Cal actually gained 2 points from seeds even after losing all the points from the 200 medley. A lot of that come from the Golden Bear 200 freestylers, where 5 swimmers are set to score after only three were seeded in that range.

The fastest-rising team this morning was Michigan, and basically all of their 20 gained points came in the opening 200 medley relay, where the Wolverines took 9th after being seeded outside of scoring range. USC fell off the most, dropping from 85 points to 46 and losing points in several different races, most notably the 200 medley relay and 100 fly.