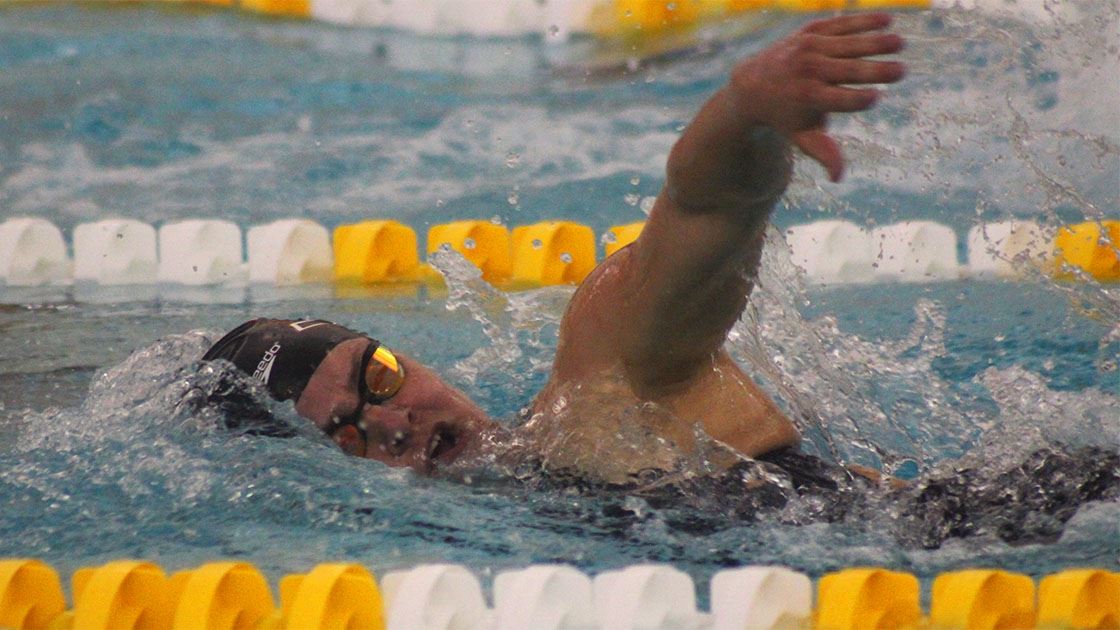 TERRE HAUTE, IN – The Greyhound swimming & diving teams were looking to make a statement after the CSCAA Top 25 rankings came out earlier this week, and over the weekend they made that statement. In a two-day meet on Saturday and Sunday, the Greyhound women came out 2-0 with five broken records to stay undefeated for the season, beating Missouri State 187.5 – 179.5 and Indiana State 195 – 173. The men had some stellar races, but fell short to Missouri State 217 – 153.

“Our women’s team is incredibly strong in our unity and it showed in our races today,” explains van Jaarsveld, “This win is a huge achievement as we stay undefeated and gives us so much confidence moving forward.”

Diving finally made their long-anticipated season opener over the weekend, sweeping wins on both the one and three meter boards for the men. Josh Zylstra started the season off with a victory in the three meter, compiling a final score of 311.75. Payton Staman also collected a hot start to the young season, earning his own win in the one meter board with 323.25 points. Freshman Kendra Seymour led the way for the women, placing third in her first collegiate competition on the women’s one meter with 216.45 points.

“Diving was all around great this weekend, as the men went first through third on the three meter and the women had a strong performance on one meter,” illustrated Zylstra. “The team atmosphere is great and it makes competing fun, especially at this level early in the season.”

The Greyhounds will have one of their biggest tests of the season next weekend, as they travel down to McKendree on Friday and Lindenwood on Saturday. Friday’s competition will commence at 10 am, and will include both McKendree and Drury. Saturday will have the teams split, with the majority of student-athletes at Lindenwood for the Lindenwood Invitational at 12:30 pm (diving stays at McKendree, 12 pm start time).

Below is a complete list of all the Greyhound winners and their events:

TERRE HAUTE, Ind. – Missouri State’s men’s and women’s swimming and diving concluded Sunday’s final day of competition at the Sycamore Invitational with team victories against the University of Indianapolis and host Indiana State at the Vigo Schools Aquatic Center.

Each squad checked the win column at the invite, as the men edged past the University of Indianapolis 217-153 while the women compiled a 214.5-154.5 rout of host and fellow Missouri Valley Conference member Indiana State. UIndy narrowly passed the Bears, 187.5-179.5, splitting the women’s results in their second-consecutive double dual.

“I was pleased with our groups’ effort this weekend,” said head coach Dave Collins. “Excited to see both squads continue to train and improve as we prepare for a home meet stretch.”

Arthur Cury captured MSU’s first individual win of the second day, besting UIndy in the 100 butterfly by less than a tenth-of-a-second at 49.72. Throughout Sunday’s two sessions, Cury picked up a pair of winning short-distance freestyle finishes in the 100 (45.34) and 200 freestyle (1:37.75), respectively.

“I am happy with my performance at the invite, almost matching my best times,” said Cury. “Looking forward to a break to continue training and work on my technique before our two home meets in November.”

Newcomer Tyler Lewis touched the wall four seconds ahead of runner-up, and fellow Bear, Antonio Thomas for the 3:57.58 victory in the 400 IM. James Vaughn also squeezed onto the top-five leaderboard with a fourth-place time.

“Glad to have lots of team support at the meet,” said Lewis. “I am excited to continue working hard so that I can stay on track and reach my goals as the season progresses.”

Moving onto the 200 freestyle portion of the sessions, Libby Howell produced the deciding swim for the first of many times throughout day two with a 1:48.98 mark in the short-distance race. She also collected key points for MSU with the top spot in the 1650 freestyle (16:55.92). Samantha Hietpas followed Howell’s lead for the runner-up finish in the long-distance event.

“The freestyle group had a great meet, showing lots of mental toughness,” said Howell. “I’m pleased with the energy coming from the group and cannot wait to see us improve moving forward.”

Not to be outdone, the men’s side landed three in the top-five of the 1650 freestyle, with Thomas pacing the Bears with a dominant time of 15:19.27. Pawel Krawczyk and Sebastian Odent completed the event with second and fourth-place times, respectively.

MSU assembled another win streak across the 100 freestyle and 200 breaststroke races, with Anna Miller and Cury collecting first-place points for both sides while reigning Mid-American Conference swimmer of the week Michael Hampel extended his stretch of individual titles with the deciding swim in the 200 breaststroke.

“Seeing quick times early in the season makes me excited for what our team can accomplish in the mid-season meets,” said Miller. “We had a great team dynamic, which helped tremendously throughout the three sessions.”

The men logged the Bears lone relay win of day two in the 400 freestyle, seeing the team of Cury, Samuel Senn, Noah Witzki, and Thomas Heye combine for the 3:02.94 top time.

“I am proud of our team’s performance throughout the invitational,” said Witzki. “Being able to represent MSU and contribute is something I take immense pride in.”

Diving made a splash in the final day of events as Ashley Yarbrough led the 1-2-3 formation for the Bears on the 3-meter boards, tallying a 275.40 first-place total. Dayana Popa (254.55) and Adriana Avila (249.15) rounded out the diving trio. Michael Claunch clinched second on the 1-meter boards with a 315.30 dive.

“This meet provided us with a great opportunity to showcase new dives that we have incorporated into our lists,” said Yarbrough. “We’ll continue to train and improve as we approach mid-season and begin preparation for the Missouri Valley Conference Championships.”

Up next, the Bears play host to Missouri on Saturday, Nov. 2 at Hammons Student Center Pool beginning at 1 p.m.

TERRE HAUTE, IND. – The Sycamore Invite has come to a close at the Vigo County Aquatic Center. Indiana State fell to Indianapolis by a score of 195-173 while also falling to Missouri State by a score of 214.5-154.5 in double dual action this weekend.

Surging Sycamores
Sophomore Anna Maria Nasiou dominated today breaking two of her own school records and claiming first in two events. Nasiou clocked a time of 1:04.37 in the 100 breaststroke taking first place while posting another record breaking time of 2:19.62 in the 200 breaststroke.

Marlene Pavlu Lewin also had a day at the Sycamore Invite claiming a third place finish in the 200 backstroke with a time of 2:01.85. Lewin was also a part of both relay teams that took second place today.

Sycamore diver Britney Meienburg had another school record dive today in the 3 meter springboard. Meienburg posted at score of 208.5 putting her fourth best in school history.

Christensen’s Corner
“Overall, I thought we performed well this weekend. We’ve set our scheduling to be really challenging, because we want to keep improving as a program. Missouri State and Indianapolis are both really good teams, and this was a fast meet for the middle of October,” Head Coach Josh Christensen said.

“We had some great performances across a lot of different events. I thought our freshman did really well overall. We definitely have some places we have to get better though.

From a season planning standpoint, we’re really focused on setting ourselves up to be our best in February. We’ve got a lot of depth and we need to continue to develop it, but also working on being sharper with our top end as well.

A lot to build off this weekend and we’re just going to keep getting better from here.”

Up Next
Indiana State will travel to Evansville, IN to compete in a conference double-dual meet against Evansville, and Little Rock on November 2nd starting at 11 am EST.

Everyone from Missouri State and Indiana State was suited. UIndy was around half and half suited.