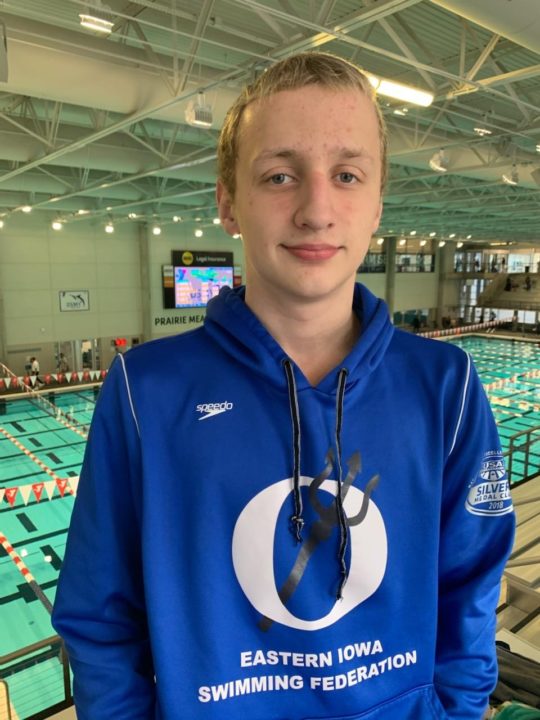 15-year-old Diggory Dillingham and 14-year-old Mason Turner each set an Iowa Swimming LSC record over the weekend at the DSMY Spooktacular meet. Current photo via EISF

Teams from around the midwest gathered in Des Moines, Iowa this weekend for the DSMY Spooktacular meet.

On Saturday, 15-year-old Diggory Dillingham immediately got to work in the 50 freestyle, where he touched in second place with a time of 20.41. With this, Dillingham broke the Iowa Swimming LSC record in the 50 freestyle for the 15-16 age-group. Dillingham also earned his first US Open cut, sliding under the 20.49 time standard for the 2020 meet in December.

In Dillingham’s other event, the 200 freestyle, he attempted to cut more time off of his 50 freestyle time by going for a split. Impressively, he managed to get within .04 of his time from earlier in the session, flipping in a 20.45 before swimming at a relaxed pace the rest of the race.

The only swimmer to beat Dillingham in the 50 freestyle was 17-year-old Luke Barr, who is listed at #16 on SwimSwam’s High School Class of 2021 Men’s Rankings. In the event, Barr crushed a new best time of 19.83 to cut more than three tenths of a second off of his best time. An Indiana University commit, Barr’s 50 is now one of the fastest in his entire class.

Barr also posted a best time in the 100 backstroke, where he went a time of 47.10 to drop over 1.5 seconds off of his best time. Although Barr’s best events have typically been the IMs and the sprint freestyle events, his 100 backstroke time now puts him within range of the top backstrokers in his class. At the time of his ranking, Barr’s backstroke was actually considered one of his weaker events, which implies that he has some big things coming in his primary events.

The next day, Barr came back and posted two additional best times. Beginning with the 100 freestyle, Barr swam to a final time of 43.73, which cut over a half second off of his previous best (44.27). With this, he now owns one of the top times in his entire class and the 4th fastest time in the entire country this season, regardless of age.

Earlier in the day, 14-year-old Mason Turner set the second Iowa Swimming record of the weekend in the 200 butterfly. Swimming a final time of 1:53.82, Turner managed to set a new LSC record for 13-14 year-olds in the event. He also cut almost 2 seconds off of his best time and finished first by 1.5 seconds. Turner’s swim ranks first in the country in his age group, adding to his top ranking in the 1000 freestyle as well.

In the 500 freestyle, Turner matched his best time, touching first in 4:37.09, which best the rest of the field by over 5 seconds.

We had great swims all around! Nate also posted a 47.7 in the 100 back. Thank you DSMY for a fast and safe meet!