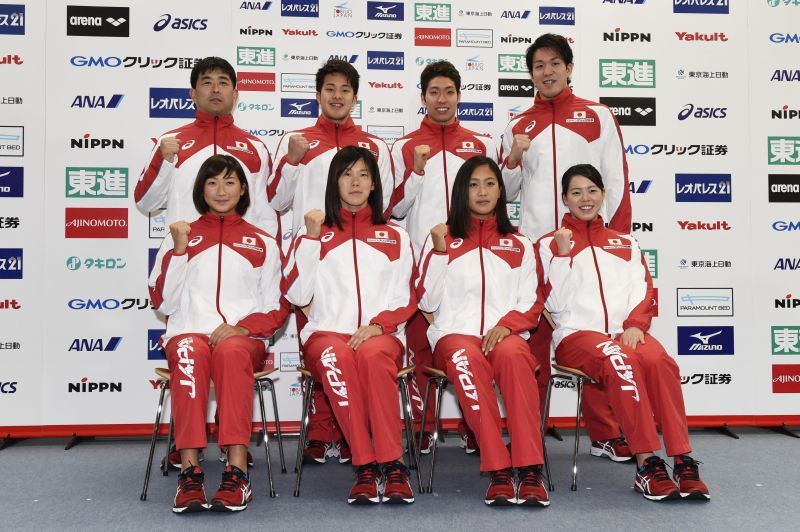 Despite tough Japanese Olympic-qualifying standards that sometimes stood quicker than the country's own record in the event, the Japanese are bringing its 2nd-largest swimming squad ever to an Olympics. Archive photo via courtesy of Japanese Swimming Federation

After a thrilling Japan Swim in Tokyo last week, an Olympic Trials filled with both highs and lows, the Japanese Swimming Federation has released its 34-member roster for the 2016 Olympic Games.

In reviewing the names, there aren’t any surprises or crazy last-minute additions from what we knew transpired from the 7-day competition. If anything, the absence of athletes in key events, such as Kosuke Kitajima missing out on the 100m breaststroke or any male/female sprint freestylers, further puts a spotlight on the fact that the JSF placed ambitiously high qualifying standards above and beyond the FINA qualification cuts in the hopes of not only pushing its athletes during Trials, but also with the aim of fielding a team likely and capable of scoring multiple finals once in Rio.

You can refresh yourself on the entire Japan Swim/Olympic Trials meet via the daily recap links below:

Somewhat surprisingly, despite the tough standards, Japan is bringing its 2nd biggest team ever to an Olympic Games. 34 swimmers will be representing Japan in Rio, just 4 members fewer than the 38 who competed for the nation at the 1964 Games in Tokyo.

Of the 34 members this year, 21 are first-time Olympians, marking the squad’s average age at just 22.4 years old. The age spectrum ranges from 3-time Olympic medalist Takeshi Matsuda at 31 years old to Natsumi Sakai, attending her first Olympics at the age of 14.

Japanese Head Coach Norimasa Hirai said in a press conference announcing the athletes, “We’re starting with the national team from today. The swimmers will have to develop themselves more (until the Olympics) and we hope to have a positive result.”

The national team is slated to hold a training camp in early May followed by participating in the Japan Open meet scheduled for May 20-22nd.

Wow no mens 100 BR, after the dominance of Kitajima there is a huge hole in japan

Some of the relay only swimmers could have done individual events, ex. men’s 50 and 100 free and any other relay swimmer under the FINA A cuts. They are still at the meet. Did not look to see what other events would have had swimmers.

I agree with Dan (nice name!). It doesn’t make sense to me to send relay-only swimmers unless you let them swim the other races they have qualified to swim according to FINA standards. You’re paying for their ticket to Rio already; are the entry fees for individual races THAT high? The experience of swimming individual races at an Olympic Games could really help them in 2020.

By the way, why is Hagino swimming the Medley Relay? Is he going to be the anchor? If so, why wouldn’t he also swim the 400 free relay?

They don’t bring a specific 100 fly guy, although they bring Takuro Fuji for medley relay who didn’t meet their QT but I assume will also swim individual 100 fly since already swum FINA A. So I think Hagino will be their back up/prelims swimmer for fly leg.

Just did a quick check. Based on the Japanese Swimming Federation’s report, Hagino is not slated for the 4 x 100 medley relay. His events should be the two IMs, 200 free and the 800m fre relay.

For reference, Hagino’s name is first on the list: http://tobiuojapan.org/archives/8555960.html

Japan doesn’t let anyone swim in an event that they don’t expect to at least make the semi final. It has nothing to do with cost. It is a national pride thing that seems very weird to us westerners. They don’t want to be shamed by any athlete having a poor result at the Olympics. It also seems like their standards are a bit off as Kitajima swam the 4th fastest time in the world this year (but in the semi final not final) and they aren’t sending him.