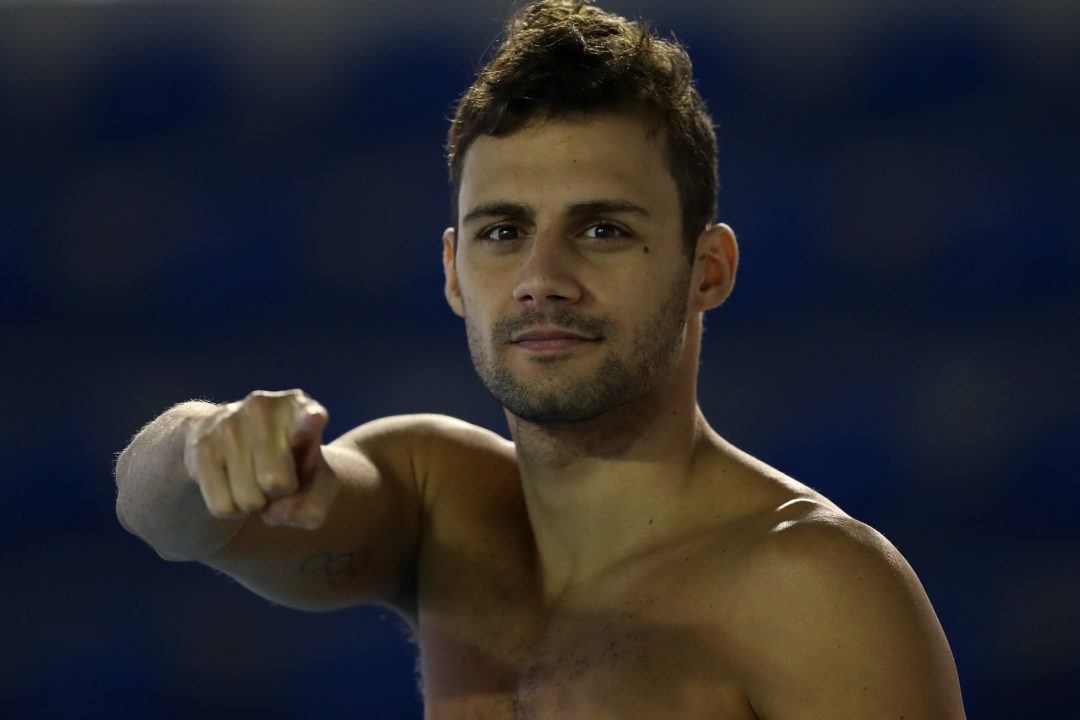 The action got underway in Brazil today at the 2019 José Finkel Trophy, with swimmers Vini Lanza, Leonardo de Deus, and Daynara Paula among the winners. Archive photo via Satiro Sodre/SS Press

The 2019 José Finkel Trophy got underway today in Paraná, Brazil, with the men’s and women’s 100m fly, 400m free and 200m back individual events composing the agenda.

For the women’s 100m fly, it was Daynara Paula who got to the wall first, leading a trio of sub-minute women, which also included Daiene Dias and Ilaria Bianchi. Paula clocked the winning effort of 59.06, while Dias finished less than .20 behind in a mark of 59.24. Visiting Italian swimmer Bianchi rounded out the top 3 in 59.61.

As for the men’s 100m fly, Vini Lanza got the job done, producing a winning time of 52.42. Splitting 24.75/27.67, the Minas Tenis swimmer topped the podium in his first race since taking bronze in this event in 51.88 at this year’s Pan American Games in Lima, Peru.

Runner-up this evening went to Iago Moussalem Amaral, who touched just a fingernail behind Lanza in 52.47, while Matheus Gonche secured bronze in 52.71.

Fernanda Goeij was the fastest women’s 200m backstroker, producing a gold medal-worthy mark of 2:13.09, while Leonardo de Deus stopped the clock in 1:58.71 to take gold for the men in the only sub-2:00 effort.

For de Deus, his time tonight was quicker than the 1:58.73 he fired off in Lima for Pan American Games bronze. The 28-year-old also came away with 200m fly gold in Peru, along with relay medals.

Through just 1 day of competition, Minas Tenis leads the team points competition in 479.50, with Pinheiros sitting in 2nd place with 200 points. SESI-SP checks-in as the 3rd team so far with 164 points.

Flamengo was 6th on men relay
Both pinheiros and Minas went 3:17
Felipe Ribeiro split 47,75 (he didn’t swim well since his 2015 junior world’s )
Scheffer split 48,45 looks like he is trying to get more front speed for his 200

Thank you! The results were incorrect at the time of posting; I’ve now updated to reflect what is published.

Well, these days 47.7 from a relay start is nothing but average… trying to be nice

I’m going to change my name to “Leondard”