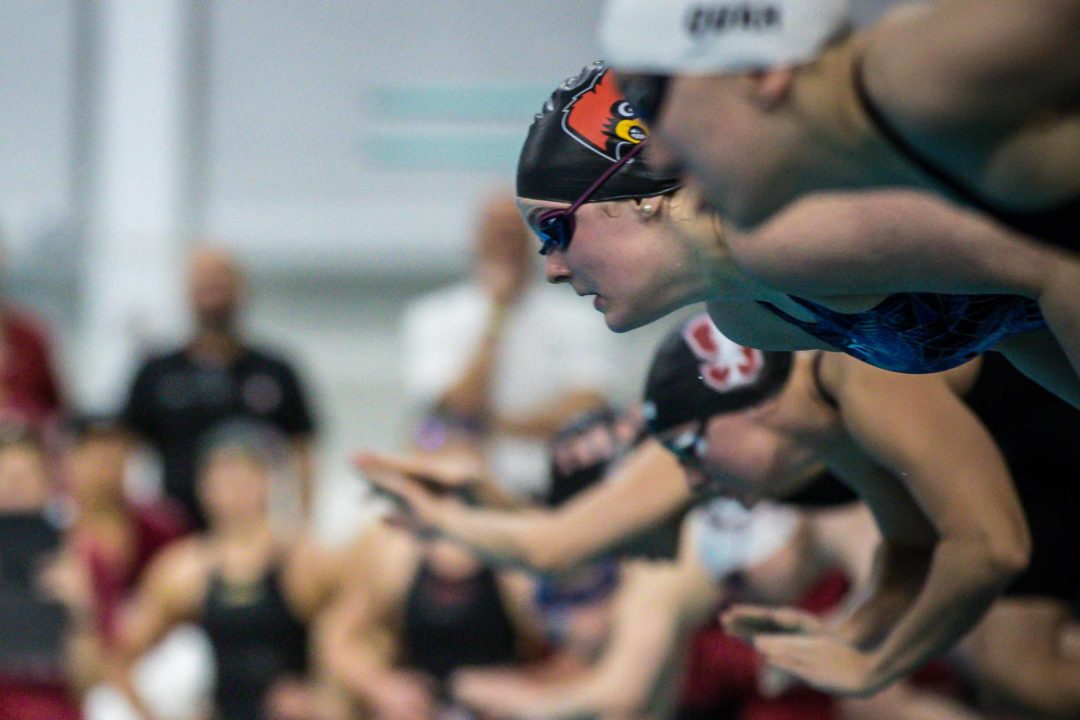 Graduated star Mallory Comerford's relay production will be tough to replace, but Louisville still has a deep sprint group and some butterfly stars. Current photo via Jack Spitser/Spitser Photography

Last year, we postulated that with virtually no major losses to graduation or immediate impact-type freshmen , the Cardinals would finish close to where they had in 2018. Sure enough, with essentially the same roster as they had in the 2017-2018 season, they continued their climb up the NCAA ranks, finishing a program-best 4th place after finishing 5th the year before.

At NCAAs, Mallory Comerford made the most of her final campaign, taking 3rd in the 50 free and sweep the 100 and 200 freestyle events. Only four other Cardinals scored individually, but every single relay finished between 4th and 6th, as Louisville finished comfortably ahead of the teams that were bunched between 5th and 9th in the final standings.

First, the bad news: a star of Comerford’s caliber is nearly impossible to replace. The 56 points she scored individually in the sprint free events would have placed 21st in the team standings last season, and no other Louisville swimmer cracked the top 20 in any of these three events.

The good news, however, is that while it’ll be tough to replace Comerford, she was the only senior on any of the free relays, and the Cardinals still have some potential scorers. Rising senior Lainey Visscher scored in the 50 free as a sophomore, and her season best last year was only 0.06s away from scoring. Avery Braunecker and Casey Fanz both split sub-22 on the 200 free relay, and incoming freshmen Christiana Regenauer holds a lifetime best of 22.59, as does rising sophomore Katie Schorr.

Outside of Comerford, Louisville has opted to have most of its likely 100 free swimmers focus on the 400 free relay the past few years, a move that has by and large paid off and will probably continue. However, they do stand a chance of netting some points in the 200 free.

Arina Openysheva put up a 1:45.1 at the SMU Classic and split sub-1:45 on the 800 free relay at NCAAs. At the 2018 NCAAs, Sophie Cattermole led off the 800 free relay in 1:44.3, a time that would’ve put her in the 200 B-final if she’d be able to do that individually last year. Rising sophomore Diana Dunn went 1:46.4 at the IU Invitational last fall, but wasn’t able to match that time once the calendar rolled over. Incoming freshman Maddie Luther sports a lifetime best of 1:47.69 from almost two years ago, making her an intriguing addition to Cardinal’s mid-distance crew.

The outlook is bleaker on the distance end of the spectrum, where the Cardinals didn’t earn any points last year and don’t appear to be bringing anyone in who’s likely to make an immediate impact.

The Cardinals take another big hit here, as Alina Kendzior was the only Cardinal who swam the 100 back at NCAAs, and she’s completed her college career. Their next-fastest 100 back swimmer was Ashlyn Schoof, whose season-best time of 53.85 was over two seconds slower than Kendzior’s. Schoof did go 52.47 in 2018, and her ability to get back into that range will be critical for the Cardinals’ relays.

Mariia Astashkina scored in the B-final in both events a a freshman, but struggled last year and didn’t score individually. Louisville does have another pair of sub-1:00 100 breast swimmers in Kaylee Wheeler and Morgan Friesen. Wheeler split 26.9 on the 200 medley relay, putting her solidly in the middle of the pack compared to other splits in that A-final, and she could very well pick up some points in the 100 breast this year. Friesen is a little better at the longer distance, finishing 21st in the 200 last year. At least one of the three should be able to net some points, and there’s a reasonable chance that all three could score.

Fly is clearly the Cardinals’ strongest discipline in the post-Comerford era. Grace Oglesby was a double A-finalist as a junior last year, racking up 27 points with a 8th-place finish in the 100 and the 3rd in the 200.

Kraus dropped three seconds in 200 fly compared to her senior year of high school, ultimately finishing 14th last year as just a freshman. Her lifetime best of 52.52 is just over half a second off what it took to make the 100 fly B-final last year, so it’s certainly possible that we could see her switch from the 200 free to the 100 fly this year at NCAAs.

This discipline is a great example of how a team could clearly outperform the rating we’re assigning them based on projected returning points, as the Cardinals have some tantalizing prospects. At the top of that list is Oglesby, who was entered in the 200 IM with a seed time that would’ve scored, but opted to focus on the 400 medley relay instead.

Freshman Maria Eduarda Sumida swam both IMs at NCAAs, and while she ultimately finished well out of scoring range, her seed time in the 400 IM would’ve put her on the edge of the B-final. Just like in the 200 free, Dunn looked great in the 200 IM early in the season, going 1:58 at the IU Invite, but didn’t qualify for NCAAs.

Incoming freshman Abby Hay has been 2:00 in the 200 IM, so while she’s still a ways off from NCAA scoring, she could be one to watch in future years.

It’s understandable if you’re a bit surprised that diving currently projects as Louisville’s 2nd-strongest discipline. But Molly Fears has steadily improved through each of her three years as a Cardinal and finally cracked the top 16 last year with a 12th-place finish in platform diving. That, plus her 23rd place on the 3m, has her projected to score double-digit points this season.

While not currently projected to score any points, the Cardinals also return Michaela Sliney, who finished 37thy in both the 1m and 3m last year. They also add freshman Abbie Erickson, who specializes in platform.

Visscher, Braunecker, and Fanz form a strong core for the 200 free relay. Opensheyva, Regenauer, and Schorr all have lifetime bests of 22-mid, so one of them should be able to drop a sub-22 relay split, which would keep them on the edge of the A-final.

Similarly, subbing in Braunecker for Comerford in the 400 free prelims costs 2-3 seconds, which should still qualify for the B-final, but it’d be a bit closer.

The medleys are a little more of a mess, and as we mentioned earlier the Cardinals are going to need a solid replacement for Kendzior to have any hope of scoring.

At this point, you may have picked up on the fact that it’s going to be a challenge to replace Comerford. In fact, if we were basing these initial power rankings solely on projected points using last year’s results, the Cardinals would probably be closer to 17th.

This leaves Louisville in an interesting position. On one hand, this is a program that’s had a lot of success despite a lack of big name recruits, which indicates they do a good job of developing swimmers. On the other hand, it seems like a lot of the “second tier” swimmers who could be NCAA scorers or come up big on relays failed to match their best times last year.

If two or three things break right for the Cardinals — previous NCAA scorers who had a down year return to form, a few underclassmen develop into solid relays legs or individual scorers, and/or they bring in an international swimmer we’re not yet aware of (much like Bart Piszczorowicz on the men’s team last year) — they could outperform our projections and make a return to the top ten.

Would love to see Louisville find another diamond in the rough.

“Life after Comerford” makes it sound like she died lol

A well coached team which will bounce back quickly.

Watch out for Maddie Luther, definitely a Darkhorse. Wouldn’t surprise me to see her once a spot for the 800 free relay

I actually was talking about her in the last sentence of the sprint free section. I’m not sure how her name got deleted, but it’s back in there now. Thanks!

All around I think it’s a pretty solid team but I really do think she will surprise a lot of people. Mark my words 1:44.38 this year.

THERE IS NO LIFE AFTER COMERFORD

I miss Mallory already. But at least she’ll be there for Tokyo 2020.