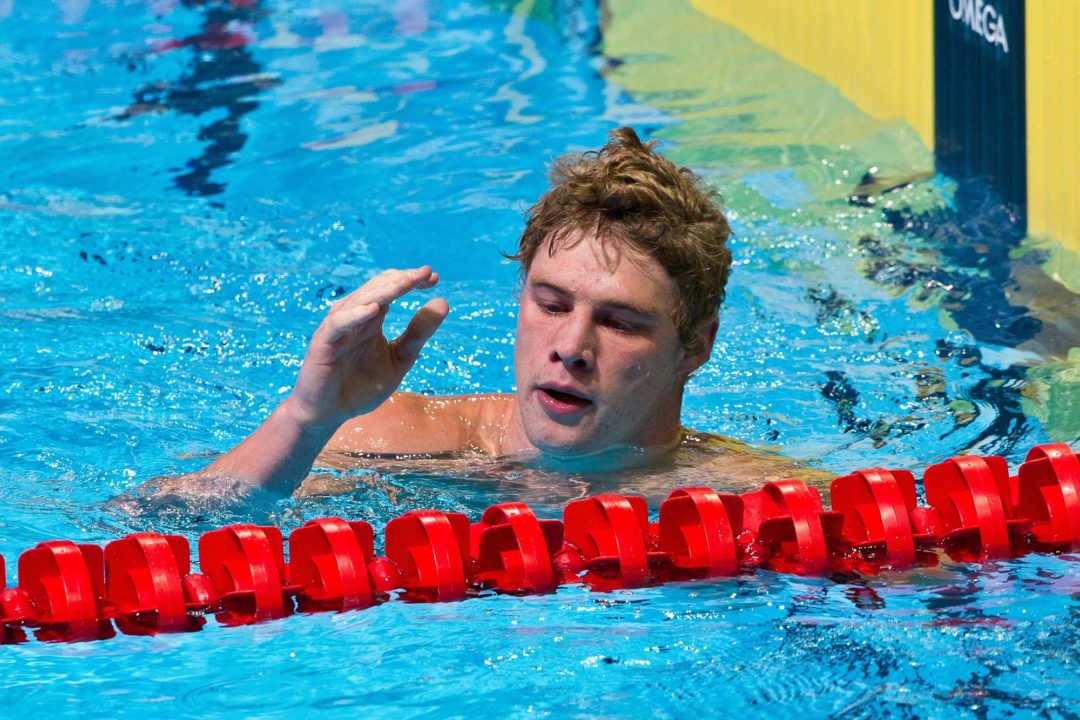 Kevin Cordes shaved four one-hundredths off his own American record in the 100 breast for Arizona on Day 2 at the Texas Invite. Archive photo via Tim Binning/TheSwimPictures.com

Arizona continued to swim strong on night two of the Texas Hall of Fame Invitational, winning 5 events including the 100 breaststroke where Kevin Cordes broke his own American record by .04. Mitchell Friedemann, Michael Meyer, Bonnie Brandon and the men’s 200 medley relay were other winners for the Wildcats, who had to overcome a DQ of their top medley relay in the meet’s opening event.

USC won the women’s 200 medley relay in a touchout over Texas, with both teams hitting NCAA “A” cuts. USC’s team was Kendyl Stewart, Kasey Carlson, Jasmine Tosky and Katarzyna Wilk. There was a timing error with the first two splits, so we don’t know how fast the Trojan backstroker or breaststroker went, but that was where USC gained its lead over Texas. The Longhorns almost came back on Ellen Lobb’s 21.8 freestyle split, but Wilk held her off by the skin of her teeth.

Wisconsin was third in 1:38.62, a half-second off the A cut. Anna Meinholz was 26.7 on breaststroke and Ivy Martin 21.67 on free for the Badgers, who touched out UCLA and Arizona in the event.

The Arizona men were in line for an NCAA leading time and a school record in the 200 medley relay, but were disqualified on what appeared to be a false start by freestyler Renny Richmond. That relay included a 21.2 backstroke leg from Mitchell Friedemann, a 22.78 breaststroke split from Kevin Cordes, (which would have been the second-best breaststroke split in NCAA history), a 19.9 from Giles Smith on fly and a 19.1 from Richmond on the anchor leg. The overall time would have been 1:23.20 if the team hadn’t been disqualified.

But thankfully for Arizona, its B team was up to the challenge, winning the event in 1:25.40, an NCAA “A” cut. Kevin Steel was a fast 23.4 on the breaststroke and Brian Stevens went 19.2 on the free leg for the Wildcats. Texas took second, going 1:25.90 on the back-end prowess of Jack Conger (20.40 fly) and Matt Ellis (19.30 free). Penn State was third with backstroker Nate Savoy putting up the fastest backstroke split of all finishing teams in 21.57.

Stina Gardell had a breakout swim in the 400 IM, going 4:03.56, a lifetime best and the fourth-fastest time in the nation so far. That makes an NCAA field that already featured a Maya DiRado-Elizabeth Beisel rivalry even more intriguing, as Gardell looks to be in the hunt with Melanie Margalis and Cammile Adams in the early goings of the winter season. Gardell was followed by USC teammate Meghan Hawthorne who went 4:07.28. Third went to Penn State’s Gabi Shishkoff (4:09.00) who just beat out a pair of Texas Longhorns, Kaitlin Pawlowicz and Madisyn Cox.

Arizona’s Michael Meyer won the 400 IM one night after winning the 200 IM, and he also put up the third fastest time in the NCAA in the process. Meyer went 3:41.73 to blow away the field, leading by nearly 3 seconds before the race was even half over. The battle for second was between Brigham Young’s Hayden Palmer and Arizona’s Sam Rowan; Palmer was the runner-up in 3:45.38 and Rowan took third with a 3:45.54. Eric Solis was fourth for Arizona, going 3:47.10. David Moore out of Incarnate Word (which is making its transition to Division I starting this year) won the B final with the fifth-fastest time of the night, going 3:47.16 and beating last year’s NCAA runner-up Michael Weiss.

Bonnie Brandon won the women’s 200 free, hitting an NCAA “A” cut and becoming one of only five women under 1:44 in the NCAA so far this year. Brandon was only 4th at the 100 turn, but ramped things up in the back half to win, going 52.5 in her second 100. Sam Tucker of Texas and Chelsea Chenault out of USC were locked in a tight battle the whole way – Chenault led the entire field at the 100 mark, but Tucker made her way by Chenault at the very last second to take second, going 1:44.63 to Chenault’s 1:44.68. Penn State’s Alyson Ackman took fourth in 1:45.26.

The men’s 200 free field was so close coming out of prelims that just six tenths of a second separated spots 2 through 8. At finals, the 4-seed, Cristian Quintero blew by the field for the win, going 1:33.50 to beat out top-seeded Clay Youngquist of Texas. Youngquist went 1:33.72 and a pair of USC Trojans came in 3 and 4. Dimitri Colupaev went 1:34.13 and Reed Malone was 1:34.84. Giles Smith of Arizona scratched this race in finals, likely to focus on Arizona’s relays.

Blue Fish pro Laura Sogar was the top seed in the women’s 100 breast, but was upset by USC’s Kasey Carlson, the defending NCAA runner-up. Carlson went 58.61, dropping a second off her prelims time and hitting an NCAA A cut. Sogar dropped .02 from prelims to get under the 59 mark – she went 58.98, sitting third at the 50 mark but battling back to almost win the race at the finish. Texas’ Gretchen Jaques was third in 1:00.00 after going 59.3 this morning. In the C final, Jasmine Tosky went a 1:02.14 to cut a second off what had to be a disappointing prelims swim. She finished 17th overall.

Kevin Cordes only saved about a tenth of a second in prelims, but that extra tenth allowed him to break his own American record in the 100 breast at finals. Cordes went 50.70 to take .04 off the American record he set at NCAAs back in March. His teammate Kevin Steel finished second just like at the 2013 NCAAs. Steel went 52.58. USC sophomore Morten Klarskov and Incarnate Word’s Thiago Parravicini tied for the bronze medal, each going 53.65 and beating USC’s Sergio Lujan-Rivera by just .02. Texas had to be pleased with the finals performance of Imri Ganiel; he went 53.76 to win the B final after only posting a 55.1 this morning.

Kendyl Stewart came from behind to win the 100 back for USC, beating out Texas’ Lily Moldenhauer, who led at the 50. Stewart was 52.29, Moldenhauer 52.57. The pair just beat out UCLA Bruin Linnea Mack (52.59) whose teammate Madison White (53.43) followed her in. Mackenzie Power of Penn State took fifth and USC’s Henriette Stenkvist was sixth. Harvard’s Danielle Lee won the B final in 53.87, almost a full second faster than she was this morning.

Mitchell Friedemann and Luca Spinazzola both put up highly-ranked NCAA times in the 100 back this morning, but neither could match them at finals. Friedemann went 46.01 for Arizona after going 45.5 this morning. Spinazzola of USC was 46.31 after going 46.2 in prelims. Shane Ryan of Penn State, on the other hand, dropped .4 to almost get Spinazzola for second; Ryan was 46.71. Jack Conger of Texas took fourth, just ahead of Penn State Nittany Lion Nate Savoy.

The Southern Cal Trojans won the 800 free relay to sweep the day’s relays on the women’s side. The team of Chelsea Chenault, Henriette Stenkvist, Lexie Maladrewicz and Lynette Lim all split 1:45s to go 7:02.76 as a team, an A cut and the third-fastest time in the nation. Texas came in second, going 7:09.84 with a fast 1:44.71 split from Sam Tucker on her third 200 freestyle of the day. Penn State took third overall in 7:10.86.

It appears all of Arizona’s 800 free relays were late scratches, perhaps to give Wildcat men and women – both of whom already have the one A cut required to bring all 5 relays to NCAAs – some additional rest leading into the final day of competition tomorrow.

@Braden Keith Matt Ellis was also 1:35.8 on the 4×200 relay, interesting to see what they will do about the order at the end of the year.

Matt has been pretty good all weekend so far….especially compared to the rest of the Texas men’s team.

Texas men not shaved or tapered but are suited up. All of the other teams except Incarnate Word and possibly Penn State are. A few Texas guys were brought down more than others. Just enough to get the relays qualified. Matt is one of those guys and even he is not all the way down.

I love it when parents say their kids were not shaved and tapered. “No really, they go this fast all the time!” Shout out to the other 2 who readily admitted that they were!!

Anyone know what is going on with Darmody? Haven’t seen him
with Texas all year.

He swam on Texas’s B 200 free relay Thursday night, but has scratched all of his individual events since then, including the 200 back this morning.

also where are jake ritter and tripp cooper? texas would have a tough lineup if they had all their pieces. anyone know anything?

One of them has an injured body part. The other one gave it.

LOL. One could call it that.

HMMM, I guess similar to kids over imbibed, falling off their bunk and getting a concussion. Damn Gatorade!