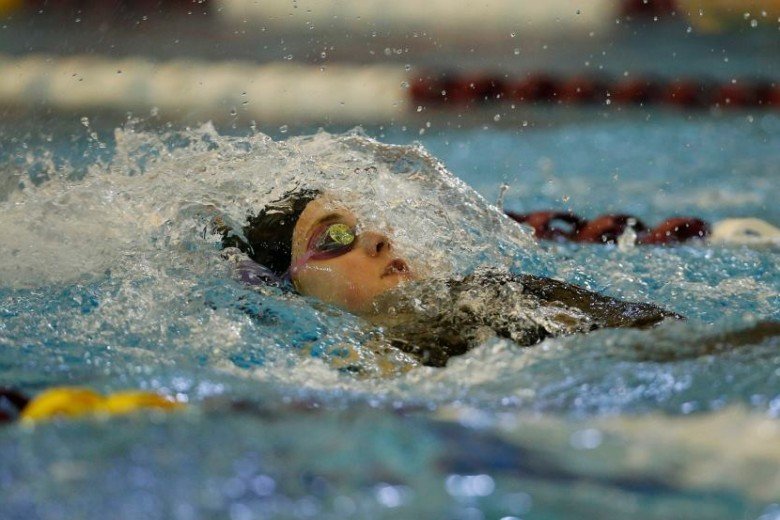 The pool was on fire on the second night of the Total Performance Invitational, hosted by Kenyon College. Over the course of the night's events, an impressive six pool and meet records fell. Current photo via Kenyon Athletics

The pool was on fire on the second night of the Total Performance Invitational, hosted by Kenyon College. Over the course of the night’s events, an impressive seven pool and meet records fell.

The beginning of the session began with the University of Pennsylvania’s 200 freestyle A relay coming close to breaking a pool record set in 2009 by Kansas. However, at 1:32.90, the Penn team fell just short of the 1:32.45 record. Second place Johns Hopkins University fielded a team comprised of Ana Bogdanovski, Kylie Ternes, Kailyn Koh and Sarah Rinsma. Rinsma’s anchor leg was far and away the fastest of the group – a 23.00 for the JHU team to finish in 1:33.52. Johns Hopkins also fielded a team which took seventh, touching at 1:36.58.

The Ladies put together a trio of top eight relays. Their third place A relay team was comprised of  Jenner McLeod, Haley Townsend, Jourdan Cline and Kelsey McMurtry. They finished with a time of 1:34.30. The B relay touched fourth in 1:35.45 and the exhibition C relay touched eighth, clocking in at 1:36.89.

The men of Pennsylvania managed to take down the pool and meet record in their 200 freestyle relay. The team of Eric Schultz, Dillon McHugh, Christopher Lyons and Rhoads Worster finished in 1:20.02 to take gold. They were followed by the A relays from Kenyon, JHU and Depauw.

Lords Ryan Funk, Austin Caldwell, Percy Gates and Joey Duronio put up a time of 1:21.59. Caldwell was the only sub 20 split on the relay at 19.86. JHU’s team of Will Kimball, Anthony Lordi, Joseph Acquaviva and Greg Kogut had the fastest 50 split of the event. Lordi swam a 19.77 on his leg, and contributed to their third place finish with a time of 1:22.05. DePauw’s fourth place came in 1:22.32, swum by the team of Blake Lehmann, Alex Alfonso, Joe Hessburg and Jack Burgeson. The Lords also fielded a B relay that finished fifth, touching in at 1:23.68.

The second event of the night was the 200 butterfly. Davidson’s Elise Lankiewicz took first in a 2:01.76. Kenyon’s Mariah Williamson was fourth with a lifetime best of 2:04.27 to crack the D3 B cut. JHU swimmers Shirley Chan and Abby Brown also made the cut, with 2:04.42 and a 2:06.32, respectively. Chan tied for fifth with Penn’s Emma Siewert.

Kyle Yu of Penn came out victorious in the men’s 100 breast at 54.49. Close behind him was Kenyon freshman Trevor Manz, touching in at 54.92, just half a second away from an automatic qualifying time for the DIII NCAA meet. Lords Alex Beckwith and Ian Reardon joined Manz in the top heat, taking fifth and sixth with times of 56.56 and 56.68, respectively. JHU’s Acquaviva was seventh with a 57.07.

Things were growing a little dull in the meet, so in the women’s 100 backstroke, Kitayama pulled out a 54.46 to better the pool and meet records she set earlier in the day at 54.69. Her finals time is also a D3 A cut. Her teammate Sean McGrath was eighth in 57.87. Kenyon’s Rachel Flinn took third with 56.41 and CMU’s Kira Singhaus was seventh in 57.38.

Intent on keeping up the pace, Penn’s Worster followed suit and cracked the pool and meet records in the men’s 100 back. He swam a 48.64. Kenyon’s Harrison Curley made a showing, taking third in 49.17. He was followed by Dylan Davis of JHU (49.51) in fourth, and teammate Kevin Magee (51.02) in eighth.

The record board at the KAC will need some serious updating after tonight’s swimming, with more to come tomorrow! Prelims begin at 9am with finals at 530pm. For complete day 2 results, click here.