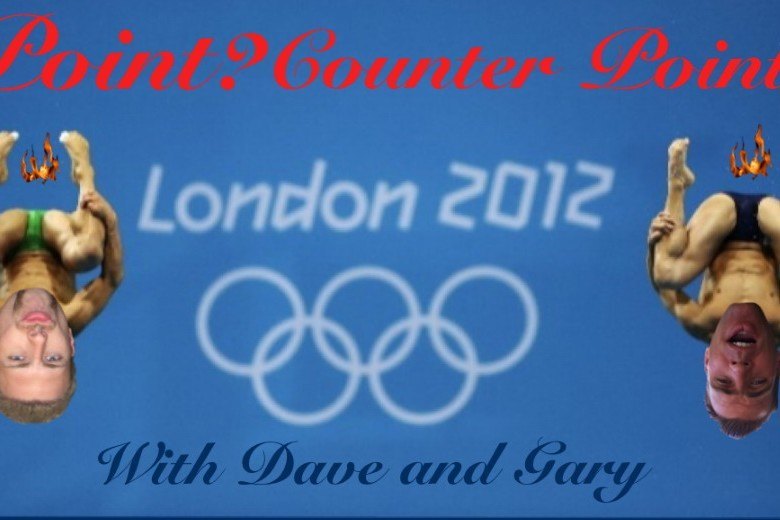 ...and Gary lets him know. Again. And again. Come read, you'll hate it!

David: What ya doin?

Gary: Her hair looked fine. I did watch Usain Bolt do his thing. I like that guy. His pre-race antics and larger than China persona garner the adulation of millions of fans around the world.

David: Funny, you were hated for similar shenanigans. Do you think that’s a difference between sports, or is Usain just better at it than you?

Gary: He’s better at it. However, I’d like to think that I single handedly paved the showboat runway that Usain now sprints down like a bloody lightning bolt on vaseline.

David: That’s right, you taught Muhammad Ali how to do it too, right? Also, that an English accent you’re putting on big guy?

Gary: I’ve been living in Blighty for almost over a fortnight now, love.

David: That accent shtick is so overdone; Savannah from the Today show did the same bit. Or was it Jimmy Fallon?

Gary: Look Chap, I’m all for USA, bloody accent or not. However, I want to ask a serious question. What the £#€¥ is Justin Gatlin  doing in the Olympics? I don’t care if he hasn’t cheated, this time. The guy has been busted for performance enhancing drugs more times than China. I don’t want to cheer for a known cheater, even if he does wear the USA jersey. It’s a disgrace! I’m embarrassed to cheer for him. And what message does it send to our youth?

That Gatlin wanker can piss off. Lifetime bans for cheaters. No exceptions!

David: Well, on another issue near and dear to your heart, what do you think about Ryan Lochte’s attempt at funny? Funny or Die is trying to encroach on our swimming humor turf!

Gary (in perfect Tarzan pitch, with English accent): Me Funny. You Die.

David: You know, it’s a shame that kids these days don’t know who you are Gary. Ryan already told me no, but do you know any other Olympians from this cycle whose coattails I can ride to mediocre columns?

Gary: Speaking of funny, I saw Davis Tarwater. I made a joke about VD and he didn’t laugh at all. I found that very suspicious…

Gary: I agree, it’s inappropriate. I just wanted to see how Davis would react. Totally suspicious… Did you know that VD stands for Van Dyken, among other things slightly less mentionable?

David: Can you change subjects without explanation for me? I feel awkward.

Gary: At a USA basketball game I sat two rows behind Evan Thorpe. I kept shouting, “Evan! Evan! It’s me, Gary!!!” but he totally ignored me. What’s his problem?!

Gary: What are you talking about?

Gary: Fine. Anyway, a few nights later I ran into the Australian swimming legend again at a party. After a brief, awkward conversation he turned to the person next to him and said, “There are a lot of weird people here.” And he was right. Totally true story.

David: He was talking about you.

Gary: David, you are penetrating another dumbension of dumb. He was talking about himself, again. Thorpes has worn Giorgio Armani exclusively for like ten years. During his week of BBC commentary he started every sentence with the word “Look.” That’s weird. Look, the world is chock full of weird people. Look, I’d consider it quite an honor to be in the same category as Evan Thorpe, if someone were to think I was weird. Look, Evan was nice. Look, I kind of like him.

David: You just can’t quite give compliments, can you?  Anyway, Missy Franklin doesn’t seem weird.

Gary: Oh, you mean besides the fact that she is an absolute freak of nature that can at seventeen years of age manipulate the element of water? She’s like a character with super powers from that lame TV series, Heroes. Nothing weird about that!

Gary: And I love Missy Franklin. I think she needs a tan. Have you been watching the Olympics at all, Dave? Did you see women’s football? Whad’ya reckon, Gov’ner?

David: You mean soccer. Please stop it with that awful accent. It’s terrible. You sound like a character from Hamlet, staged by Des Moines, Iowa’s community theater.

Gary: I’m going to ask the question again. Have you watched ANY of the Olympics?

David: Yes. And I have insightful things to say, but you won’t listen. I had this whole back-n-forth planned where we’d debate what sports should and should not be in the Olympics. For instance, I watched BMX racing for hours and loved it. Then punched a wall because I was so mad it was an Olympic sport. But you don’t care to comment. Do you?

Gary (accent veering wildly into a kind of hillbilly territory): Okay, sure. I think the Olympics could do without handball. Could someone please explain to me, again, what the devil is going on in that sport? When was the last time you saw a pick-up game of handball going on, anywhere? Case closed.

But that’s all you get Dave!  No more.

Back to what I want to talk about, USA beat Japan to win women’s soccer, err, football. USA! Our neighbor, Mexico won the men’s gold medal in soccer. I mean football. They beat Brazil. I have dubbed the winning team “The Mexicutioners.”

David: What am I supposed to say to that?

Gary: Yeah. The name “Mexicutioners” in a word mexplains just how mexcellent Mexico played against Brazil. It was a very mexciting match!

David: Pun me! Two punts! Except that wasn’t punny. But, I suppose I did walk into it.

Gary: Like a burning bag of dog poo, my friend.

This was weird. But I like weird. I would also like to hang out with these dudes.

I lived in Oz for awhile, and it’s not just Thorpie, they all start all their declarative sentences with “Look”– it’s sort like our “Hey” or “Hey, ya know what?” But yeah, it does sound weird at first.

Maybe with all those gold medals she can buy herself a tan?