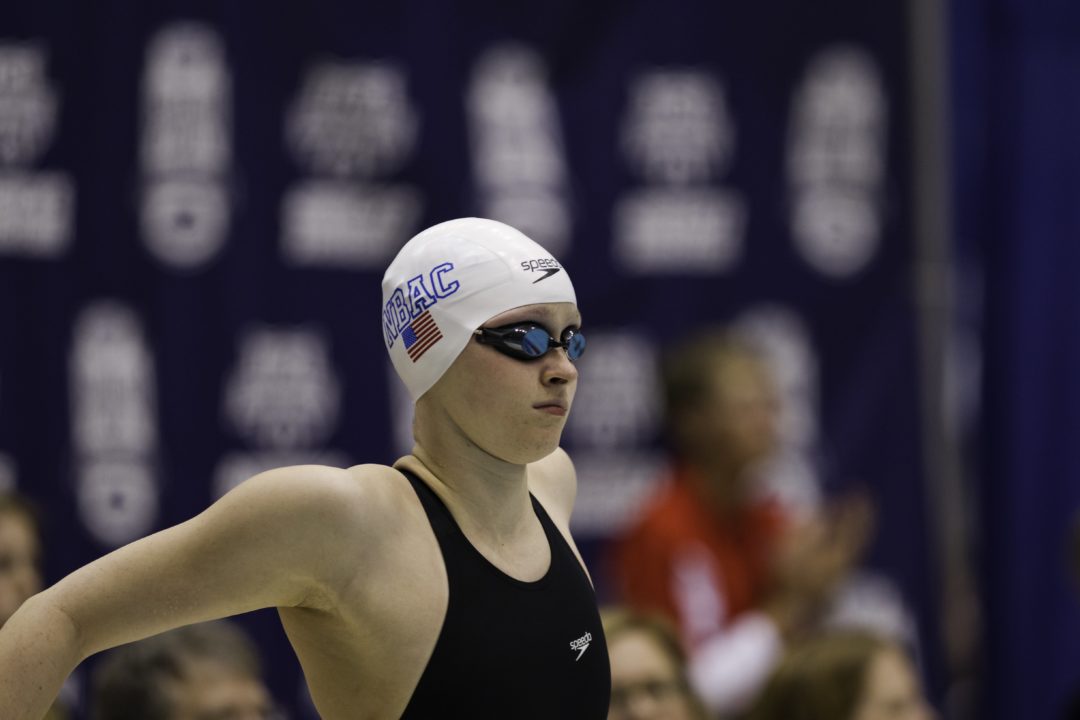 Gillian Ryan (above) placed 2nd to her teammate Cierra Runge in the 100 free to set up an awesome battle in the 200 - their better event. (Photo Courtesy: ©Tim Binning/TheSwimPictures.com)

No meet records went down on night 2 of the 2012 Junior National Championships in Indianapolis after three on the first night; however Allie Szekely was again one of the brightest spots of this session. At this rate, she’ll have a lock on Swimmer of the Meet honors.

In the women’s 400 IM, the Central Bucks’ Allie Szekely had another three-second lifetime best on her third championship meet of the summer. She took the win in 4:46.73. Pleasanton’s Allison Brown was about even through the first two legs, and faster on the freestyle, but no surprise that the 14-year old Szekely won this race on a huge breaststroke leg.

Szekely was a 1:19.9 on the breaststroke leg, but we can’t let that overlook the improvements that Szekely has made in her other three strokes this season.

In the prelims of this men’s 400 IM, the times were rather lackluster. Nobody was better than a 4:27. That changed in the finals, where Andrew Seliskar from CUBU took the victory in 4:23.27, ahead of Orinda’s Steven Stumph in 4:24.36. This race was a bit the reverse of the women; Stumph as the 200 breaststroke champion is by far the best breaststroker in the field, but Seliskar used a monster backstroke leg to break the race

In the finals of Tuesday’s 100 free, the Bolles boys maintained their top two positions with a win by 17-year old Santo Condorelli and a silver from 15-year old Caeleb Dressel in 2nd. Neither, however, was able to outshine their prelims swims, with Condorelli touching in 50.92 and Dressel just behind in 50.96. For two swimmers who are still a year away from college, though, breaking under 51 seconds twice in a day is an impressive feat.

Sven Campbell continued the hot swimming of Orinda Aquatics with a big finals drop to place 3rd in 50.97. Along with John Murray in 51.00, the top four were separated by just .08 seconds.

15-year old Justin Lynch, better known for his times in the butterfly races, swam a 51.46 in the final that is 1.3 seconds better than his lifetime best. If he makes a similar drop in his 100 fly (which will be swum Wednesday) it would mean a National Age Group Record.

Unlike the boys’ race, it took a best time to medal in this women’s 100 free. Much like the boys, however, a pair of teammates went 1-2. Cierra Runge (55.64) and Gillian Ryan (56.15) from North Baltimore took the top two spots. That ranks them 4th and 5th, respectively, in the country this season in the event, and what’s really scary is that both are even better in the 200. We could see a pair of 1:58’s in that race.

Victoria Toris from Scottsdale was 3rd in 56.28, followed by Star Aquatics’ Faith Johnson in 56.41. Katie McLaughlin from Mission Viejo was next in 56.80.

Nitro’s Quinn Carrozza was already the best 15-year old 200 backstroker in the country coming into this race after semi-finaling at the Olympic Trials. However, with a 2:11.92 in this 200 back, she establishes herself as one of the best in the country. She’s now one of the 10-fastest Americans with that best time that would have finaled in Omaha.

Carrozza attacked this race early, opening in a 1:03. It cost her a little bit in the last 50, but by that time she had plenty of room to hold on for a more than one-second victory.

Allie Szekely on her second swim of the night took 7th in 2:16.17. 13-year old Ashlyn Schoof from Wisconsin won the Bonus Final in 2:17.23 – the number-three time by a swimmer her age this season, and the fastest by a swimmer who hasn’t yet aged up.

The North Texas Nadadores’ Aaron Greene won the boys’ 200 backstroke in 2:02.23. That wasn’t a best time for the high school senior, but he did pace his swim pretty well. Sven Campbell grabbed his second podium of the meet, in two very different events at that, with a 2:02.74 for 2nd.

“If he makes a similar drop in his 100 fly (which will be swum Sunday) it would mean a National Age Group Record.”
The 100 fly’s are competed tomorrow – Wednesday!

Caeleb Dressel times are really,really impressive.I just hope he is not an early riser with a full mature body.

Calaeb has always been a great swimmer since he was one of the quickest swimmers ever at age 10 . He holds the 13-14 50 meter free national age group record .He has only lately grown taller so his victories are based on terrific swimming skills not size . He is not an example of over training at a young age for it was only relatively lately that he ever did doubles or much dry land .His sister had a great freshman year at Florida St. His younger sister is a very good swimmer also . His father Michael was an excellent sprinter in the 1970’s at the University of Delaware .

Caleb and Santo are two of the most driven individuals I have seen. Both are far from filling their frames. Their goal was to take one two at the meet coming off of trials and they did it. Great futures are ahead of these young men, and they have the coaches to guide them in the right direction. Go Bolles!

I repeat Allie Szekely is a phenom. I haven’t seen a such big natural talent since Michael Phelps and Missy Franklin. She looks like a little child against her opponents. How faster could she swim with a modern suit? Perhaps it’s a career’s choice like Yannick Agnel who didn’t wear the magic suits in 2008 and in 2009. Will she swim in an old school suit at the junior panpacs? I like her style in the water. It looks smooth. Will she be only a breaststroker in the future? Or will she be an all-around swimmer? I don’t know but I like her butterfly very relaxed. Her rythm with her arms on backstroke is incredibly slow but it’s efficient and… Read more »

Ok it’s rhythm. My english continues to improve. I talked about her slow rhythm with her arms on backstroke. It’s impressive to watch.

@JG- Bobo is not a creep, he’s actually an extremely well informed swim fan from France. He also happens to be interested in our American swimming systems, which I think is great, so stop being an a** hole.