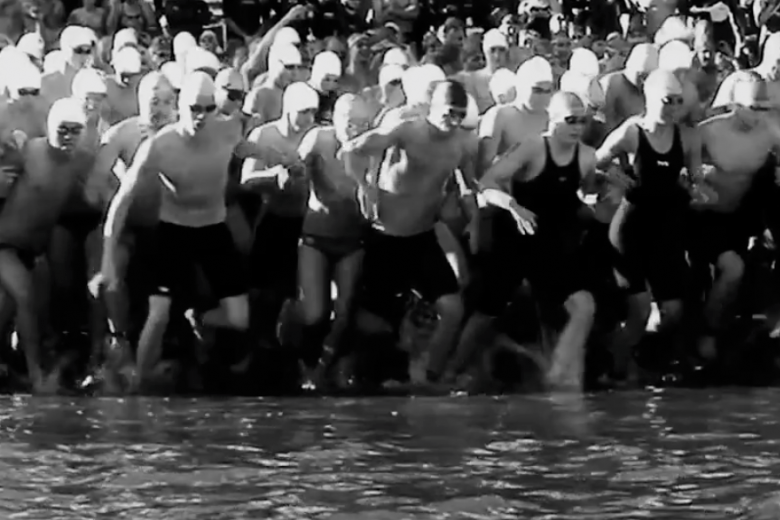 Swim news: "Since 1999 the RCP Tiburon Mile has attracted more than 100 Olympians and world-class elites from the open water ranks and the pool."

The town of Tiburon, California is the epicenter of open water competition in the fall season.  Since 1999, the RCP Tiburon Mile has attracted more than 100 Olympians and world-class elites from the open water ranks and the pool.  That’s the genius, or rather one part of the genius, behind this regal event: it pits Olympic Champions and finalists from the 1500 meters pool competition against the world’s best in open water.  It’s simple, brilliant, and, perhaps, an idea only an elite swimmer could dream up.

Meet RCP, Robert C. Placak, the event founder, but you can call him Bob if you’re one of the 900 race participants he hosts each year during idyllic fall weekends on the San Francisco Bay.

Bob knows swimming. He swam Division I at UCLA and represented the USA National Swimming Team in the late 1970s and early 1980s before he hung up his suit.  While Bob was a true sprint-man during his swimming prime, he fell in love with the beauty of his town, Tiburon, and knew there was one way to celebrate it: an open water race, one that would attract the best in the world alongside both hundreds more who swam for fun and alongside fellowship and a pure sense of accomplishment.

If I sound like I’m gushing, it’s because I know and love Bob. He’s a friend and a mentor with a perpetually positive outlook on the sport. You rarely, if ever, hear the word “no” in the same sentence with swimming from Bob.  You hear things like “how can we” and “I’m focusing on improving the sport in this area or that area.”

Bob was at the US Olympic Trials and the Olympic Games in London supporting the newest members of the fraternity, and while he has hung up his competitive pool trunks, he still globe-trots, racing in open water events when he can work them into his busy schedule. He’s 100% engaged in the sport, a constant student, and it’s all part of his passion for continually creating an impactful experience for his flagship event, the RCP Tiburon Mile.

It’s difficult to describe how an event clicks, how it runs smoothly and feels like an effortless joy for the participants. Large events are never easy to produce. They are enormous undertakings with hundreds of moving parts. I’ve watched Bob very closely since 2006, and his professional background gives some insight as to how he marshals the 200 plus staff and volunteers who make the RCP Tiburon Mile a successful event.

Much of it has to do with the culture he has created at his own company, Robert C. Placak and Associates Insurance Services. His team is prompt and professional, cheerful and familial. In other words, when they’re on the job you feel like you’re taken care of, like you’re a member of the family, a meticulously organized family.

Bob has run his insurance services company for more than twenty years, and his management skills clearly reflect in his execution of the RCP Tiburon Mile.  From the moment the elites arrive, Bob and his lovely wife Graciela have them over for an intimate dinner. It’s a warm welcome that sets the tone.  Competitors know they’re going to race, know they’re going to fight valiantly to win. They also know there’s a prize worthy of their efforts, $10,000 to male and female champions. More than anything, they know their host respects their talents. Bob’s one of them, knowledgeable to the nth degree about their history, their goals. Bob’s a part of the elite swimming community, and he treats them like swimming family.

The event itself is something all swimmers, coaches and aquatic meet organizers should witness. It would be invaluable from an educational standpoint. Bob, while tirelessly concerned about the enjoyment factor, is first and foremost a safety chief.

He personally takes the elites out on the bay the day before they race, running them through detailed analysis of the course, and where the boats and kayaks will be (which is literally a safety corridor from start to finish).  During the race, Bob’s on the water ever watchful. Minutes from the end, his boat races into a side dock, from which he sprints to the finish line to greet everyone as they round through the carrels. He congratulates them, and assesses them. He offers blankets to the cold and water to the dehydrated.  Kids who finish typically get the biggest smile and cheer. Somehow, Bob remains unflappable through it all, ever confident in the positive experience swimming in a beautiful place can offer.

To fan the RCP TIBURON MILE on Facebook, go here.

Since Robert C. Placak founded The Tiburon Mile in 1999, swimmers and swimming fans have converged in the Town of Tiburon to participate in one of the most competitive and prestigious open water swims in the world – the RCP Tiburon Mile.  Athletes swim one nautical mile from San Francisco Bay’s Angel Island to the shores of Downtown Tiburon.  They compete in one of several divisions including Elite, Age Group and Wet Suit – all vying for cash and prizes. Participating swimmers include Olympic and World Champion swimmers from the USA, Russia, New Zealand, Australia and Germany, to name a few.  Also competing in this world-class event are national and local pool and open water swimmers, as well as collegiate swimmers. Throughout the years, over $1,500,000 has been raised to benefit designated charities such as Special Olympics Northern California, Hospice By the Bay and the USA Swimming Foundation.

The RCP Tiburon Mile Swim is lucky to have the support of over 200 volunteers from the local community who help both on the water and on land, to keep the event running smoothly as well as a core committee who year after year join together to put this event together.

Whatever the outcome, all swimmers will be met with the Famous Tiburon Mile Post Race Celebration. More than fourteen top Bay Area restaurants will cater the Swimmer’s Brunch along the waterfront park in Tiburon. While feasting on the delectable food, athletes and spectators can relax while listening to the tunes of the live jazz band, Johnny Smith Band.

Without a doubt this one of the best open water events in the world. Bob and his amazing team have created an event that is a blast for everyone involved. The fact that it also supports create causes is great too. Get to this event if you can!

The entry link you posted is for the Sprint Classic (50 yd freestyle race) and not for the mile. Fun fact for Shark Week enthusiasts, Tiburon is “shark” in Spanish!