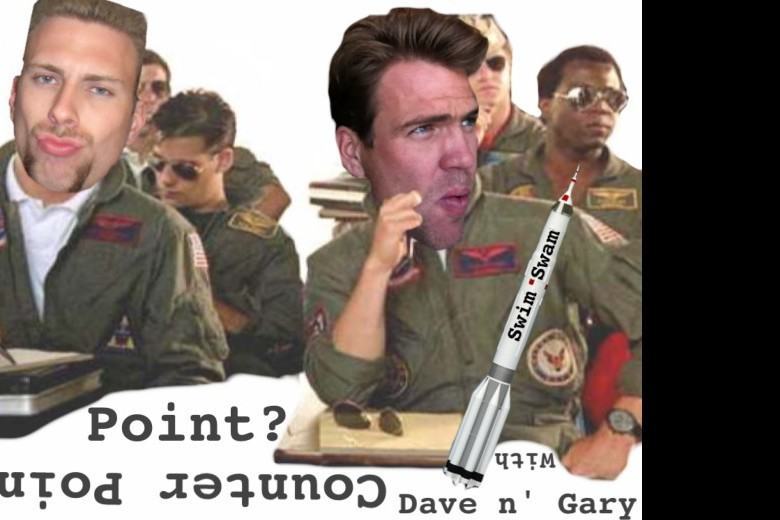 Have you ever wondered if a E.T. was/is faster than Kitajima? Neither did anybody else, but come embrace absurdity for 175 words.

Gary: Bad news Dave, the jig is up.  The noose is out.  The news is released.  The eagle has la…

Gary: Correct!  So, here we go, lets stretch our mental muscle.  Who could swim faster? E.T. or that dwarf from Lord of the Rings?

Gary: I feel like I’m part of The Goobie Brothers with you.

David: Thanks!  I think.

Gary:  For those of us that aren’t door-knob-dorks, a “ferengi” is a Star Trek extraterrestrial, scrote-head race. I had to Google it.

I’m going with the dwarf on this one. He’s stocky all around but has incredible overall strength. Who could question his determination? He’d probably make a decent breaststroker.

E.T. is about as tall as Kitajima. But he’s got that wide body and really thin arms. He lives on Reese’s Pieces, and we’re not talking about Eddie Reese’s Pieces. That body composition of E.T.’s doesn’t make for fast swimming. Just ask Ian Thorpe.

….Who could swim faster? Dave Salo or Mike Bottom?

David: I mean, this one has no answer.  I feel dirty even talking about it.

Gary: This matchup is the only “what if” that can actually produce a result. Getting these two accomplished coaches, and formerly accomplished swimmers, to don their suits and step up on the blocks may be as difficult as pulling Ian away from the all-you-can-eat buffet table, but it could happen. Wild horses, Dave, couldn’t drag him away. Match race? I’d donate $20 to a prize money pool to see it happen.

Gary: Everybody loves Rowdy. Am I the only one that thinks… ah, never mind…

Gary: I AM THE MEEKEST MAN IN THE WORLD!!! (followed by chest thumping)

David: Are we talking about egos?  But enough about swimming, let’s talk about something stupid.

Gary: That shouldn’t be hard. Let me try.

I would like to take this opportunity, right now, before our column gets canned, to thank Mel Stewart, in my own cheeky way (cheeky like a young Shirley Temple, not an old Shirley Temple), for allowing me the opportunity to “contribute” to an otherwise respectable website publication. Mel, I know you haven’t slept well since the first Dave and Gary column ran. You look tired. I just want you to know that I love you, and respect you. Thank you.

In 1995 Melvin Monroe Stewart and I qualified for and attended the Pan Pacific Championships in Atlanta, Georgia. Mel was an Olympic gold medalist and star of the sport, with a poster for sale in Swimming World magazine, then a respectable publication. Mel is not now and was not then a shy person. He was Gold Medal Mel! I was young and a relative newcomer to the international swimming circuit looking to the battle scarred veteran for guidance. I wanted Mel to be my father, basically. I studied him. His every move. I wanted to be just like him. I wanted to wear his skin. And I took note.

In 1995 the handheld video camera was enormous. Like the size of a breadbox. Mel carried one at arm’s length with the lens pointed at that unwavering, brilliant smile of his. I remember it so clearly. Anyway, Mel was producing, directing, starring in and filming his very own movie. And the camera always rolled. Tape. Not digital. And there was nowhere to post it. No YouTube or Facebook or Twitter or Vimeo. It was just pornography back then. The Internet was just being born.

I have often wondered to myself, what ever happened to that video footage? I wonder if you occasionally pull it out late at night remembering our time together? Teammates on a team? I wonder if there’s any footage of me? I’m really asking you, do you still have that video from 1995 Pan Pacs?

Mel, that video, to me, represents the end of your swimming career. But more importantly, that video was the first iteration of what would eventually morph over the years into what is now Swim Swam. You had the vision for Swim Swam way back then. To see that vision of yours realized, well, I think it’s grand. Congratulations to you, Mel, on a job well done.

You underestimate Gollum. He is VERY determined…and crafty.

GHJ….I’ve been looking for those videos for years. I think they’re lost in the void known as my garage. Stay tuned…

David and I would like to open the orfice firewall that separates us from our (37) readers. Post some questions that you would like to read us answer in a future column!

hmm… is the typo intentional?