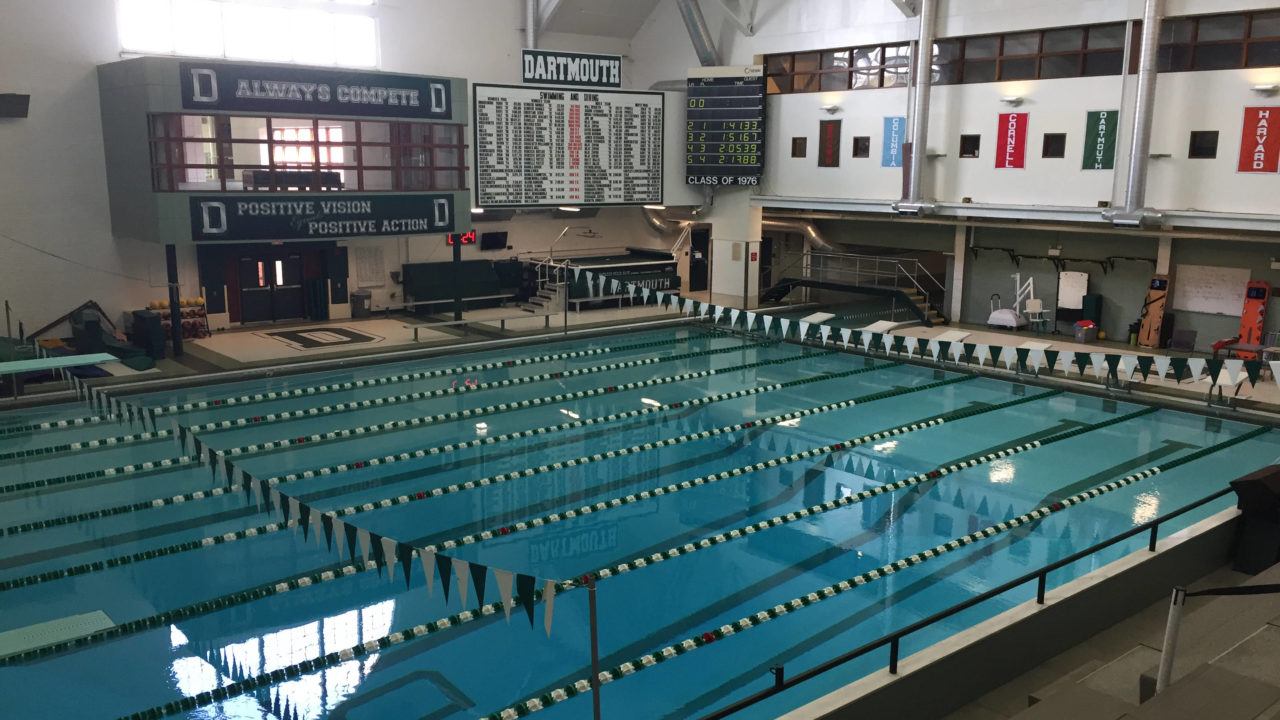 The Dartmouth women’s swim team has been put on institutional probation after violating the college’s hazing policy, the school announced... Archive photo via Dartmouth Athletics

The Dartmouth women’s swim team has been put on institutional probation after violating the college’s hazing policy, the school announced on Monday. The team admitted to the violations and the probation was enacted after “an extensive series of interviews conducted by the Department of Safety and Security and senior staff in the Department of Athletics and Recreation.”

The school says that the matter was not pursued as a criminal violation, that no team members were found to have been physically harmed, and that no drugs or alcohol were involved. The specific action that caused the violation was when first-year team members were told to create and present a sexualized PowerPoint presentation for their teammates during their December 2016 winter break training trip.

As part of their probation, the team will have to participate in educational and team development activities. Further, while the team will be able to train during the fall, their first 3 meets of the season have been cancelled, and they will be allowed to resume competition on December 1. Their winter training trip has also been cancelled.

“We hold our teams to high standards and our student-athletes understand their collective responsibility to the community,” says Director of Athletics and Recreation Harry Sheehy. “The members of the team have acknowledged that their behavior was unacceptable and that their actions have consequences.”

Organizational Adjudication Committee (OAC) hearing panels, who imposed the probation and educational and team development requirements, are composed of two faculty members, two administrators, and three students. The athletics sanctions, which include the cancellation of meets and the winter training trip, while informed by the OAC outcome, are independent of the OAC process.

In the 2016-2017 season, which was Jamie Holder‘s first as head coach of Dartmouth, the women’s team finished in last place among 8 teams. They scored 358 points, which put them 295 points behind 7th-place Cornell. They are the second Ivy League team to have a portion of their season cancelled for conduct violations in the last year: Princeton suspended its men’s team midway through the 2016-2017 season, which included them not participating in the Ivy League Championships.

Wow, this penalty seems harsh for the given scenario

Depends on how their fall training is affected, IMO. The current wording of the article is weird. Says they will be allowed to train in the fall, but also that their training can resume December 1? Or is that supposed to say their meet schedule resumes December 1?

If they’re able to train in the fall… Eh. Miss a couple meets and lose their training trip. Not a huge deal. No one is losing scholarships or being expelled over this. If they actually can’t start practices til December, then I agree that it’s harsh.

Of course, this is all with no knowledge of what “sexualized PowerPoint” means in this situation (two words I’d never have put together on my own).… Read more »

Considering we elected a president who said “grab them by the….”, yeah, a bit harsh.

Glad to see you voted for him. Thank you for your vote.

Unfortunately I am Russian, so I can’t vote. ?

Hazing is…hazing! There is no measurement…if it’s not construction movement to being better in your sport it serves no purpose and has no place.

Very good I am glad to see other colleges follow the lead of PU. These Dartmouthittes have no business acting like college girls! If only more institutions would hold their student-athletes, and the general student population accountable for collegiate-like activities we might have more young people to send to Afghanistan!!!!

No surprise here. Has everyone so quickly forgotten the Mar 2012 Rolling Stone article? It’s clearly the culture of the place, with no lessons learned.

Based on the made up Rolling Story of the UVA fraternity, I would not rely on Rolling Stone as a source of credible information.

I don’t really think Rolling Stone is the paragon of accurate journalistic reporting.

This seems a bit silly and a overreaction. I hope the freshman are not psychologically scared for life. Let’s face it, a good high school girls swim team would clobber the Dartmouth women’s team. Do I need to say any more?

New Hampshire has dire birth rates ( 2nd lowest in nation ) fully reduced by 50% since 1977. I think we should be encouraging Dartmouth girls to procreate & then leave the babies in the woods for the good folk of NH to raise . ( Who are obviously too busy attending nightly community meetings to make their own ) .

Same Ivory Tower Title IX BS that would apply everywhere if every school looked for it – so rather than physical hazing we penalize both genders for freedom of expression with power points that have sexual innuendo and probably reflect campus humor in general. Time for the sensitivity trainer to get paid. Enjoy the brain washing girls.

Agree. Nearly every swimmer I know probably got made fun of way worse in their college experience than this, and that was only about 5-10 years ago.

Our society is becoming a bunch of wusses.

Gina, it’s things like this that make you one of my favorite commenters on this site. You’re doing the Lord’s work.

We can only assume the consequence meets the severity of the deed. As a mom of 3-girls who are/will swim in college, it’s good to see Dartmouth take a stand against inappropriate behavior and frat/”locker room” culture in a time when the country’s president is no role model for decency or integrity.

You do realize that this was the women’s team, comprised of women. Your comment about “frat” culture, at least in this specific situation, is completely unwarranted.

And are you saying that Trump has somehow influenced these women to create a hostile environment…towards other women? Or are you just looking to bash men and Trump with one comment, without actually reading the article you are commenting on?

Join the discussion It was the women’s team so I guess you meant “sorority” culture? Albeit, if every NCAA team was held accountable with season suspensions for college age creative PowerPoint humor where nobody is actually compromised with a hostile environment that infringes on their ability to compete in the sport and attend the school then there would be no athletic department revenues. That is why we only see some Ivy schools and non revenue sports with this utter Ivory Tower BS liberal interpretation

I remember the scathing attack on the Princeton men’s team when their announcement was made public. People condemned the whole team with no real knowledge of what happened. Where is the outrage now? Perhaps there is a double standard for poor behavior? More likely all these swimmers are being caught in a society quick to judge and a social media environment where they can make no mistakes.

I think they key difference is that Princeton was less forthcoming about what was going on, whereas we know that these girls made sexual powerpoints, which seems fairly innocuous on the surface (though it could very be worse than we know or expect). In contrast, it was possible given the level of information released at the time believe that the Princeton team was genuinely racist, aggressive and hostile towards non-white team members, which of course can never be tolerated.

As reported on this site there was no roster turnover which would not be the case if your speculation had any basis. Apparently, girls preparing a PowerPoint about likely hook ups and guys 15 years ago preparing a PowerPoint rating incoming freshmen girls are equally feared by Ivy League administrations as violating Title IX, at least as it pertains to penalizing non revenue sports teams.