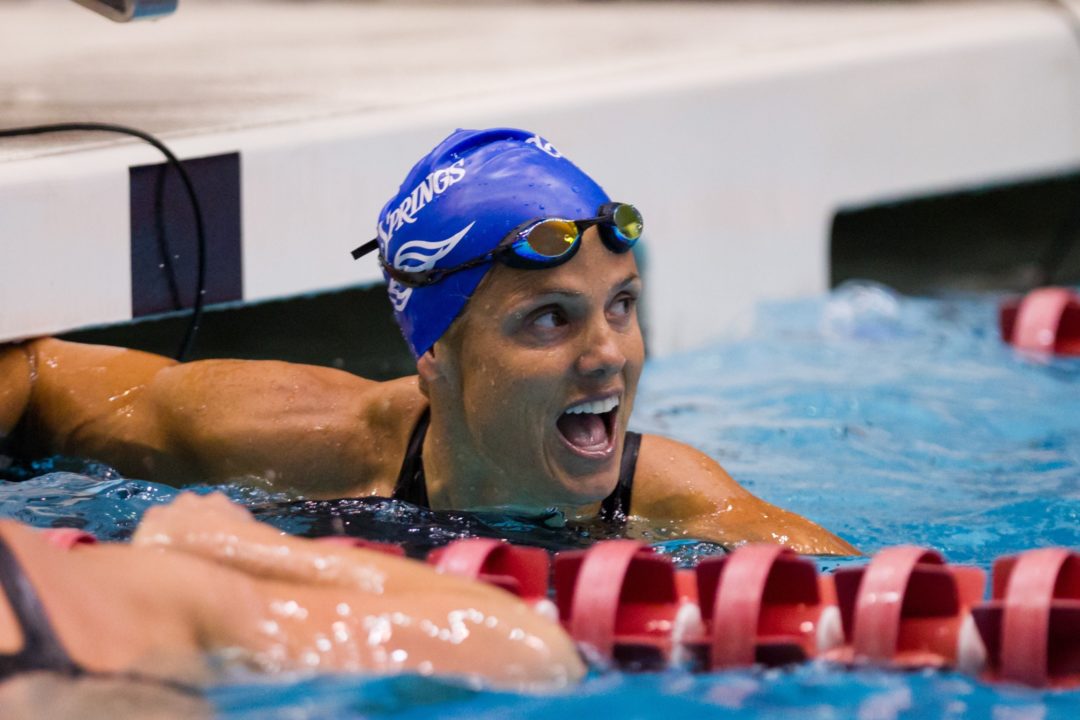 Another former University of Florida swimmer has been honored with a spot in a big Gator tradition: American swimming legend Dara... Archive photo via Tim Binning/TheSwimPictures.com

Another former University of Florida swimmer has been honored with a spot in a big Gator tradition: American swimming legend Dara Torres served as Mr. Two Bits for the Gators’ football game against Texas A&M on Saturday. She follows in the foot steps of current team member Caeleb Dressel, who filled those shoes on September 16th.

As part of her role for the game, Torres led the crowd of 90,000+ Gator fans in a traditional pre-game chant. For her appearance, Torres was joined by the 1967-1968 Florida cheerleading team, who were national champions 50 years ago.

Torres also earned a varsity letter in volleyball during her time at Florida, playing in her 5th year after exhausting her swimming eligibility.

Torres is a 5-time U.S. Olympian, having won 12 Olympic medals (4 gold) in her career that spanned 4 decades. In total she held World Records in 3 events throughout her career, but it was her longevity as much as her prominence that made her a legend. In 2008, at 41-years old, she became the oldest ever swimmer to make a U.S. Olympic team, and 4 years later she finished 4th in the 50 free at the Olympic Trials to just miss another team at 45 years old.  While at Florida, she won 28 All-American awards – the maximum possible.

As explained by Loretta Race:

“Steeped in tradition, the traditional Gator chant began way back in 1949 when fan George Edmondson spontaneously led that year’s season opener against The Citadel with a morale-boosting cheer. The cheer was about adding up bits (a ‘bit’ an eight of a dollar, so 8 of them would indeed total one dollar) and, with Florida winning that day’s game after having gone on a 5-game losing streak, ‘Mr. Two Bits’ was born.

Since 2014, a current Florida student has been selected to be the guest Mr. Two Bits for one game per season. Past honorees have included NFL Hall of Famer Emmitt Smith and profession golfer Chris DiMarco.”

I miss the real Mr. Two-Bits. His last time doing it: https://www.youtube.com/watch?v=AMhpfCATSgM

Damn she played volleyball at UF as well, that’s very impressive. Can anyone provide context on just how good she was?

She was a reserve.

I can! (Not sure if you knew, but we have a volleyball site now as well – VolleyMob.com). While she might have had significant potential as a volleyball player had she played it full-bore, she wasn’t really a significant contributor to Florida’s volleyball team.