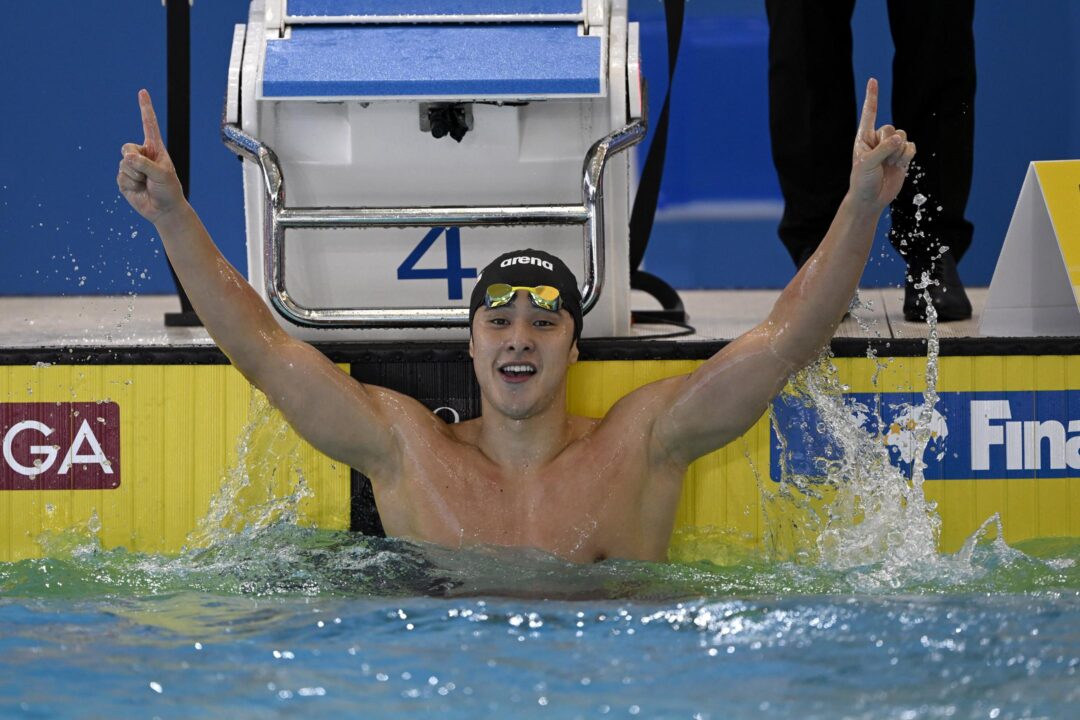 Seto came within two-tenths of the world record en route to a new Asian Record and the second-fastest swim in history in the men's 200 breaststroke. Current photo via World Aquatics

Daiya Seto put a real scare into the world record in the final of the men’s 200 breaststroke during Friday’s finals session from the Short Course World Championships in Melbourne, as the Japanese star produced the second-fastest performance of all-time in 2:00.35.

Seto, 28, jumped on the early lead in the event and slowly but surely pulled away from a competitive field, winning gold by more than a second over defending champion Nic Fink (2:01.60).

Seto now sits second all-time in the event, only trailing Russia’s Kirill Prigoda, who set the world record of 2:00.16 at the 2018 SC Worlds.

Seto closed his race much better than Prigoda, who is more of a pure breaststroker compared to Seto, who has the base of training primarily for the 400 IM throughout his entire career.

This was Seto’s first World Championship medal of any color in an event that wasn’t in medley or the 200 fly, and he won gold in dominant fashion.

He surprisingly missed the podium in the men’s 200 IM at the beginning of the meet, placing fifth after coming in as the defending champion. Seto followed up with a silver in the 200 fly, and now after this performance, is looking forward to the 400 IM on Saturday, where he comes in as the five-time defending champion.

What does Seto not swim?
lol dude cranks top tier IM/fly/breast times like nothing

Interesting to see if he starts to pursue the event internationally in long course as well. IIRC, his best in the big pool is a 2:08 from a few years ago, and the event is still pretty open for silver and bronze. While his pullouts were clearly a stronger point of his race, he wasn’t losing any ground above the water to Fink, Qin, or Watanabe. Could see him hitting 2:07-low.

not gonna lie wasn’t expecting seto to go this fast thought he would go around 2:01 low. This is Seto’s best swim in the past few years. Excited for the 4 IM I think its going to be a close race between him and Foster and potentially the WR line.

seto has to be the most versatile swimmer in short course

male swimmer
There are some VERY versatile female swimmers out there.