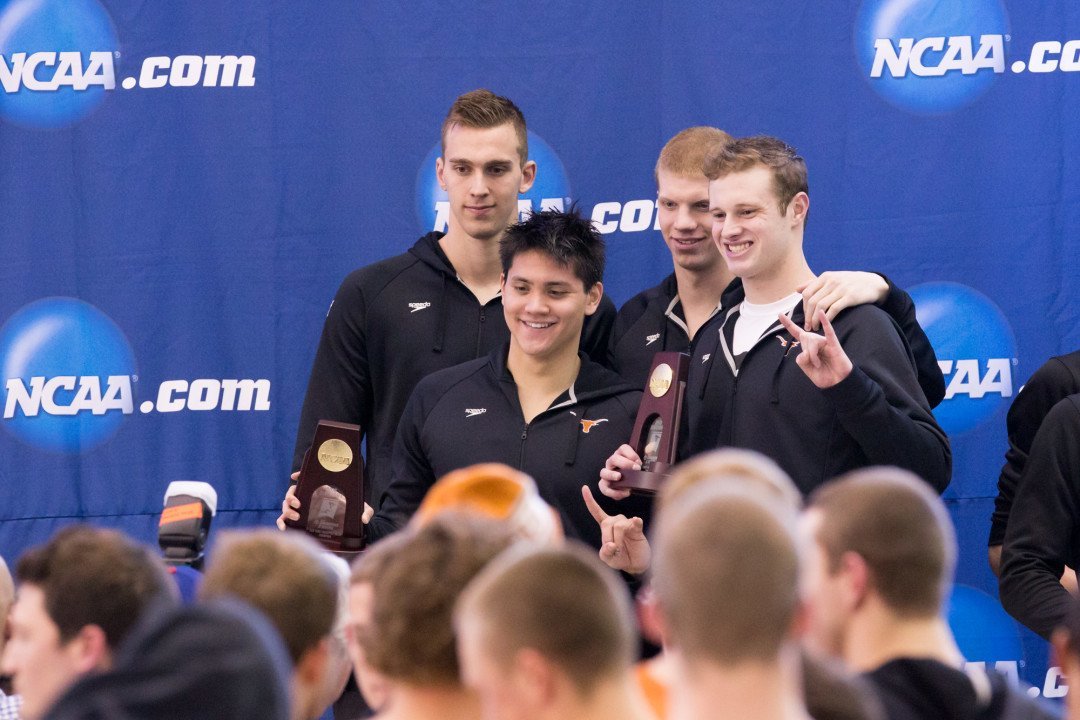 Over the past two seasons, we have seen both US Open and American records fall in the 800 freestyle relay on the men’s and women’s side at the conference level, but not at the NCAA Championships. This year, however, the new NCAA championship format gave us an opportunity us to witness the top teams in the country throw down their best 800 freestyle relay, fully shaved and tapered.

The last major record to fall on the men’s side was the US Open record in 2014. The team of Anders Nielsen, Michael Wynalda, Justin Glanda, and Connor Jaeger started off the 2014 Big Ten Championships with the first sub 6:10 800 freestyle relay in history. Wynalda was the difference maker in that relay, splitting 1:30.60 on the second leg of the race. They were faster than the American record that was set in 2009 by the Texas Longhorns at 6:10.16, but the Michigan foursome did not all represent the United States internationally. That old Texas-held American Record still stands, in fact, because each of the top three relays had at least one international swimmer on it.

This year, the top three teams managed to finish under Michigan’s US Open record time, but the Texas Longhorns were out of this world with a 6:08.03! Jack Conger led of with ninth fastest 200 freestyle in history and then handed the race off to Townley Haas who posted the fastest split in history. Haas, a freshman, bettered Wynalda’s 2014 split of 1:30.60 with his time of 1:30.52. Clark Smith and Joseph Schooling were able to close the relay in 1:33.28 and 1:32.34, respectively.

Great swims by all so why do they look so meh? The only one that looked happy was Haas. And if Haas swims that 200 like he did in the relay, Texas will have a freshman NCAA champion.

That was a little strange, wasn’t it. I guess they have an “all business” mentality. The ladies looked much happier when they broke records. It’s the fastest time in history, for cripes sake. Smile!!!!

Why don’t the live results show splits for any of the teams past third place? I am not a fan of that.

z – we’ll try and get it fixed. In the short-term, you can leave “Commit mode” and see regular results with the toggle in the upper right.

Wow so happy right now. I am not a Texas fan per se, but I totally called this way back in the fall in the comment section somewhere, wish I remembered what article. I am also happy that Texas shuts up NC State fans- at least for now. I did not choose Cal for top 4 which I should have! I really thought all year Cal could go 6:11 but I figured it was a fantasy relay, boy I should have had more faith in them. Some notes: Haas, now the automatic favorite for 200, dare I say triple crown threat as well? Clark Smith, very underwhelming. But that both is and isn’t surprising (obviously his weakest event, but still…… Read more »

Who needs shutting up? Texas came to Raleigh and got the ultimate respect. We’re pumped for our Wolfpack and had every reason to be excited about this year’s relays.

Clark smith 4:17 500 free. Very disappointing after what he did at the eddie reese invite. Im assuming he must be sick